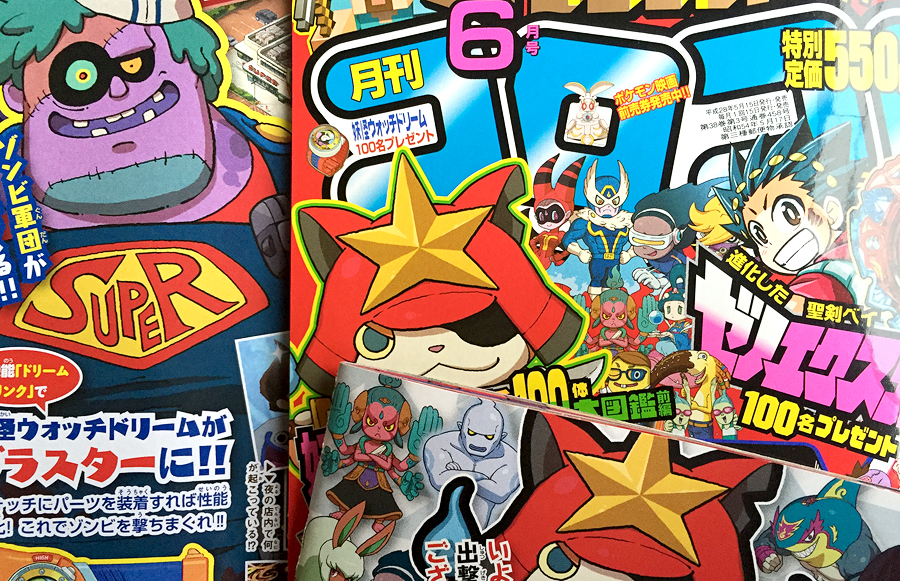 CoroCoro June 2016 with tons of Yokai Watch 3 details is finally here! We learned a lot from the previous leak, but here’s what you may have missed…

New Yokai – In Both Versions!

☆ 酒呑童子 (Shuten-douji) Fushigi/Mysterious tribe S-rank classic yokai. He has the power and charisma to make other demons follow him.

☆ チョコバナーナ (ChocoBanana) Nyororon/Slippery tribe A-rank ‘Merican yokai. A Nagabana that traveled to the USA. The chocolate topping on his long nose makes him even sweeter.

☆ ヒマ神 (Himajin) Fushigi/Mysterious tribe B-rank ‘Merican yokai. “If everyone had free time the world would be at peace.” is his idea, he floats around on a cloud.

☆ ミス・テリー (Miss Terry) Fushigi/Mysterious B-rank ‘Merican yokai. A yokai that manages mysteries in the US. They’re involved in all sorts of paranormal phenomenon.

☆ 歯磨貴婦人 (Hamiga Kifujin)  PokaPoka/Heartful B-rank ‘Merican yokai. A lady who loves to brush her teeth. She haunts places like dance parties. She has a visceral hatred of 虫歯伯爵 (Count Cavity).

☆ ひじょうぐち (Hijouguchi) Fushigi/Mysterious tribe D-rank yokai. A yokai that comes out of an emergency exit sign. It appears when there’s an emergency.

☆ カラヤブリ (Karayaburi) Fushigi/Mysterious tribe D-rank ‘Merican yokai. He breaks the shell of someone who is troubled, and pulls out their talent.

☆ わかランナー (Wakarunner) Pretty/Charming tribe D-rank ‘Merican yokai. A yokai that can’t understand anything at all. He habitually says “I don’t get it~”

☆ デモネード (Demonade) Pretty/Charming tribe D-rank ‘Merican yokai. No matter what you say, she’ll just respond with “but, ya know…”

☆ ギーくん (Geekun) Usurakage/Shady tribe D-rank ‘Merican yokai. An American otaku yokai. He has an enormous amount of knowledge about stuff like computers and games.

☆ ダイナシー (Dinoshee) Noyoron/Slippery tribe D-rank ‘Merican yokai. He runs around touching things with innocent curiosity, but ends up smashing them.

☆ あまん汁 (Amanjiru) Goketsu/Tough tribe E-rank ‘Merican yokai. Inspiriting makes a person lower their reservations and accept the current situation how it is.

☆ バンジーきゅうす (Bungeekyuusu) Nyororon/Slippery tribe E-rank yokai. Inspiriting makes people who are forced into a desperate situation feel that it’s all over… there’s nothing more you can do.

☆ バニー・ミント (Bunny Mint) Fushigi/Mysterious tribe S-rank ‘Merican yokai. A special agent for an American organization, she makes full use of her beauty and skills to infiltrate any location.

☆ Ｄ-レックス (D-Rex) Nyororon/Slippery tribe S-rank ‘Merican yokai. A dinosaur yokai that destroys anything that’s gaudy. Those he inspirits think they’re in an action movie. He’s the evolution of Dinoshee.

☆ オリジン (Origin) Bukimi/Eerie tribe S-rank ‘Merican yokai. He is rumored to be involved with the origins of yokai. Is it outrageous… or a big deal??

☆ あっけら艦 (Akkerakan) Goketsu/Tough tribe D-rank ‘Merican yokai. A battleship yokai that has seen fierce battle. Even in a pinch he acts like he has nothing to do with the situation.

☆ シレイ艦 (Shireikan) Goketsu/Tough tribe A-rank ‘Merican yokai. The evolution of Akkerakan. Because of his unfazed personality he was appointed as Commander.

☆ オトナカイ (Otonakai) Fushigi/Mysterious tribe A-rank ‘Merican yokai. A dandy reindeer yokai. He’ll cause you to buy a ton of gifts for yourself on Christmas day.

* while not new, the following yokai will also be exclusive to Sushi version: Yami Kyuubi, Onigiri Samurai, Yaki Onigiri.

☆ ゼロ博士 (Professor Zero) Usurakage/Shady tribe S-rank ‘Merican yokai. A mad scientist who creates dubious medicines. Despite being  yokai, he uses the power of science to fight.

☆ スピーディーＷ (Speedy Double) PokaPoka/Heartful tribe S-rank ‘Merican yokai. As the name suggests, this is a speedy yokai. Because of his S-rank potential for being the fastest of all, he’s the speed king.

☆ ザ・シャーク (The Shark) Goketsu/Tough tribe S-rank ‘Merican yokai. The toughest heel (“bad guy” character) in the world of yokai pro-wrestling! A powerful technique is possible because of his well trained body.

☆ レインボーン (Rainbone) Fushigi/Mysterious tribe C-rank ‘Merican yokai. A yokai that makes food colorful. It may look nice, but the flavor will still be lacking.

☆ サキちゃん (Saki-chan) Bukimi/Eerie tribe S-rank ‘Merican yokai. Leader of the heros who appear in Tempura version. She fights under cover of darkness, a dark hero!

☆ 決めて魔王 (Kimete Maou) Bukimi/Eerie tribe A-rank yokai. Making snap decisions about everything, he’s the devil of decisions. However… his decisions are not always correct.

* while not new, the following yokai will also be exclusive to Tempura version: Hikari Orochi, Urayameshi, Prideon.

☆ ラストブシニャン (Last Bushinyan) S-rank, Isamashi/Brave tribe ‘Merican Legend yokai that will be available in both Tempura and Sushi versions. He traveled from Japan to America doing “Last Samurai” activities. He fought alongside Bushinyan under the same master.

☆ ブルジョワＧ (BourgeoiG) S-rank, PokaPoka/Heartful tribe ‘Merican Legend yokai that will be available in both Tempura and Sushi versions. A millionaire yokai that throws out large bills.

☆ あしゅら (Asura) S-rank, Isamashi/Brave tribe Legend yokai that will only available in Tempura version. A mythical lord being from India.

☆ 乙姫 (Otohime) S-rank, Pretty/Charming tribe Legend yokai that will only be available in Sushi version. She is the person in control of the Dragon Palace in Ocean’s Paradise. 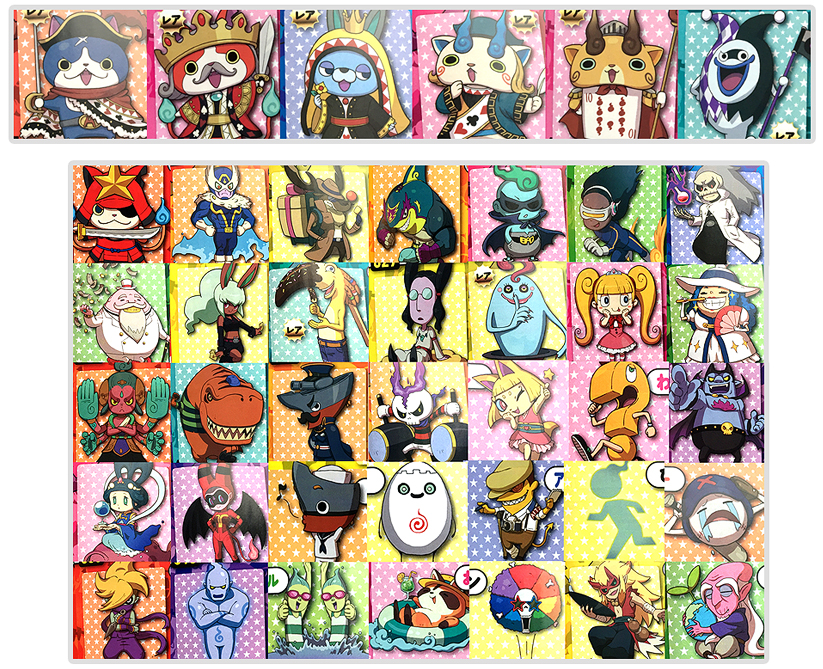 some of the new yokai!

☆ ヤーメルン邪先生 (Yaamerunja Sensei) … a strange yokai who plays a whistle to manipulate people.

Back in Japan, in the city, Inaho and USAPyon team up to investigate yokai mischief as a yokai detective agency team. so events from the manga series will also be taking place in Yokai Watch 3.

Mack seems to be a prominent local kid in the neighborhood you move to in the US. Can Mark see yokai too?! It seems you will go around together with Mark to solve some yokai events.

The summoning song changes based on if you win or miss during the dream roulette. When you set a medal, it will begin the roulette mode, and you have a chance of landing on one of seven spots on the watch face. These spots are indicated my lights.

The search mode for this new watch has also changed, now you point the lights of the watch face out in front of you. There will also be a linking feature between watch and game. All current yokai medal series will work on the new Yokai Watch Dream.

A new item called the Yokai Blaster is shown, and there is mention of a new functionality called “Dream Link.” If yokai watch parts are installed, the performance changes to an attack mode. It is shown being used to shoot a Super Hero styled Zombie boss.