Lots of new characters and mini games are coming to Yo-kai Watch 3. Keep reading for all the details.

New Methods to Power Up!

A new feature and mini game mode, treasure hunting, will be conducted by the new NPC character ボックスさん (Box-san). 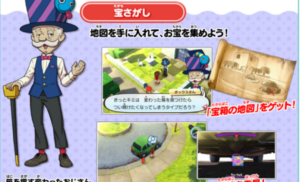 You’ll get a treasure map which you’ll need to use to find the exact area as shown, and then examine it. There you’ll find a treasure box! 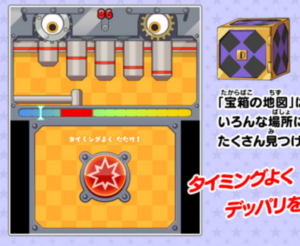 To open these boxes you’ll need keys; once opened, a mini-game will start! If you open many of these treasure boxes you’ll get a prize!

There are three new musical mini games: NYAA-KB Live (performing with the members of the NyaKB group), KJ Rap (a rap battle featuring the new yokai KAPPA) & Poltergeist (dancing with yokai at a haunted mansion).

Don-chan will be the head of this musical mini-game in Yo-kai Watch 3!

With an upcoming Level-5 event on the horizon we can expect a lot more news on Yo-kai Watch 3 really soon!

Catch up on all the latest Yo-kai Watch 3 News and details: