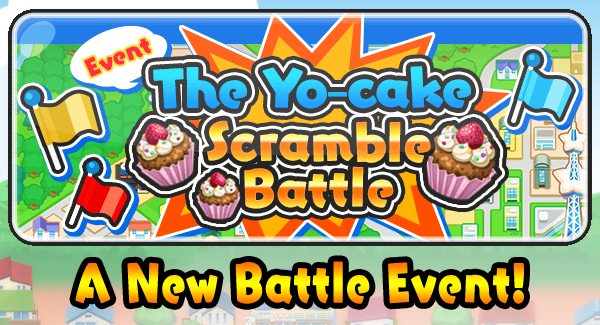 If you’ve been disappointed with the lack of fun events in Yo-kai Watch Wibble Wobble, this may be the good news you’ve been waiting for!

The Yo-cake Scramble Event, the first Scramble Event to come to Yo-kai Watch Wibble Wobble, is finally here! Not only does this event come with a brand new event map, but it also comes with lots of new content!

If you choose to participate in the event, you will be asked to fight alongside your favorite Yo-kai mascot (Jibanyan, Komasan, or Komajiro) to see which team can collect the most Yo-cakes! You will also be able to earn rewards based on which place your team finishes in, and what place you finish in!

There will be four rounds during the entire event. When a new round begins, you can switch between teams.

To get better rewards, and to help your team win, you will have to collect Yo-cakes. There are two ways to do this:

Once you join a team, you’ll be sent to a map that’s designed specifically for your team. You progress through the map like you would any other map, but it’s the stage that’s different. A orb holding a Cake Box will fall into the game field. You will need to grow the Wib Wobs around it to Size 5 or higher to lower the gauge on the orb. Once the gauge is completely lowered, the Cake Box will open and you will earn some Yo-cakes! This will contribute to your team’s score and your individual score.

To open up Cake Boxes quickly, you can use two Yo-kai: Arachnia, and Darkyubi. Arachnia was recently added to the crank, while Darkyubi was available a few times in the past. Both Yo-kai have a large bonus when it comes to damage done to Cake Boxes! You could also use Komasan S, but he does not have as large of a bonus as Arachnia and Darkyubi.

If you don’t have time to constantly farm for Yo-cakes, you could possibly try this method. After you beat one of the bosses of your map, you will be able to access a Capture Stage. In a Capture Stage, you won’t know what Yo-kai you’ll battle with. However, you will know what tribe they are. The Capture Stages also use the same compatibility chart as Score Attack does, meaning certain tribes have advantages other other tribes.

You will have to build a separate team to send to the Capture Stage. The more powerful your characters are, the less time it will take for your team to return from the capture stage. Once you send this team out, you will not be able to use the characters you built the team with until they return. They will go and steal Yo-cakes from the team that owns that Capture Stage. I recommend looking at the tips mentioned in the news entry for Yo-kai recommendations when it comes to Capture Stages.

Like most other events, there are some cool rewards that you can earn! The more cakes you collect individually, you’ll receive free rewards. However, whenever a round ends, you’ll earn rewards based on your team’s overall ranking and your personal ranking. You can see the Team Rewards by tapping on the “Scramble Battle” icon at the bottom of the screen, and then tapping on “See Rewards”

The individual rewards are more like the rewards you get from Score Attack. You have the chance of getting Crank-a-kai coins, Exporbs, and money prizes, but you can also get Yo-kai as well. The first 5 ranks within each individual team who manage to hold their spot until the end of the round will get Unikirin, who is needed to unlock Slurpent. This is a different method of getting Unikirin, as opposed to cranking him in Yo-kai Watch Puni Puni. Unikirin is not in the crank-a-kai, and is only obtainable through Scramble Battle.

The next few weeks in Wibble Wobble will certainly be exciting! With the Yo-cake Scramble Battle going on, as well as the approaching first anniversary of Wibble Wobble’s release in America, NHN is hopefully planning a very exciting time for us!

The Yo-cake Scramble Battle will end on March 22nd

You now have the chance to befriend Gargaros, the powerful oni you meet in Terror...More