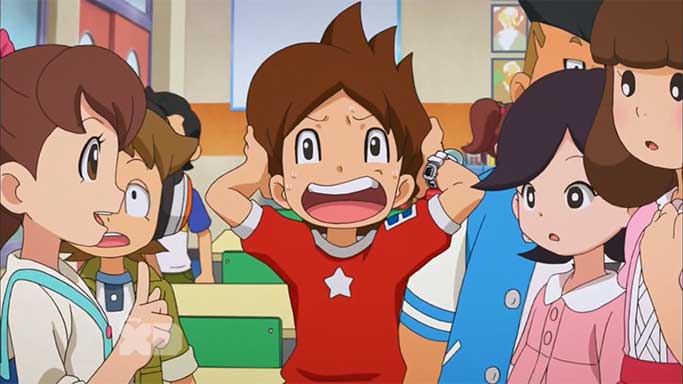 Episode 2: The One in the Water, Why Did You Say That?, Katie’s Secret

Hot on the heels of the wonderfully done first episode, episode two showcased much of the same wonderful localization we saw previously. Just like with the first episode, the second seems to bolster the idea that the localization team is staying as close to the source material as possible. The storyline has been well-preserved, and much of the humour has been kept intact.

After hearing some strange stories about sightings near a river, Nathan Adams investigates, believing the stories to be sightings of a Yo-kai. Whisper then explains that people were most likely seeing a kappa, and that kappas are a pretty famous Yo-kai variant. As Nathan scans the river, he finds a plate which he and Whisper mistake for a kappa. Meanwhile, Walkappa appears behind them and tries to get their attention. A delivery man rides by, looking for a bowl lost upstream. He trips and the bowl lands on his head. They all laugh but they never realize that Walkappa was there the whole time.

Nathan goes to school, and in the middle of the day, uses the restroom. When he comes out, Katie embarrasses him, stating that he had gone “number two”. Whisper points out later that if Katie is not in the habit of embarassing her friends, it was likely a Yo-kai that made her say what she did.

Nathan scans Katie, and finds Tattletell hanging below her mouth. Nathan tries to summon Jibanyan to fight Tattletell, but Jibanyan was training a truck, and is exhausted and injured. Nathan realizes Walkappa has followed them, and asks for his help. Together, they fight Tattletell; Tattletell tries to force Walkappa to tell secrets, but they are all amusing, not embarrassing, which causes her to lose stamina and be defeated. This grants Nathan her medal.

Later, Nathan sees that Katie is very upset. He uses Tattletell to find out that she is worried she is not meeting her mother’s expectations, specifically because she didn’t get top marks in her exams. Nathan leaves Tattletell on her, which forces Katie to tell her mother, who consoles her and tells her that as long as she tried her hardest, it’s ok.

Just as we saw in episode one, some of the text and background features have been edited for localization. For instance, in the opening shots, much of the background was edited out to remove popular Japanese mall brands and the metro station. Additionally, shots at school do their best to remove any hiragana or kanji from incidental shots:

As expected, the Yo-kai names have been changed for localization purposes. Whether this expands to all Yo-kai or just to the major roster Nathan uses is unseen. For instance, Bakurobaa has been changed into Tattletell. Interestingly, some of the jokes have been toned down a bit. For instance, when Nathan screams “doodie” and Whisper remarks, “indubitably”, the original word was largely translated as “crap” in fan-dubs.

The biggest reduction was Jibanyan’s idol obsession. Because the United States, and North America in general, doesn’t really have an “idol” culture, the original joke referencing Jibanyan collecting “every sexy magazine featuring them” was toned down to simply reference collecting their magazines. Likewise, bikini shots, popular in idol and gravure publications, have been edited to show dresses and full shirts.

All in all, a GREAT localization effort, and a wonderful episode! I feel like this second episode was better even than the first, and the effort the team has taken really shines through. Great job team! For more, please join us at the Yo-kai Watch Wiki!

4 Comments on "Yo-Kai Watch Season One, Episode Two – The One in the Water, Why Did You Say That?, Katie’s Secret (English Dub)"