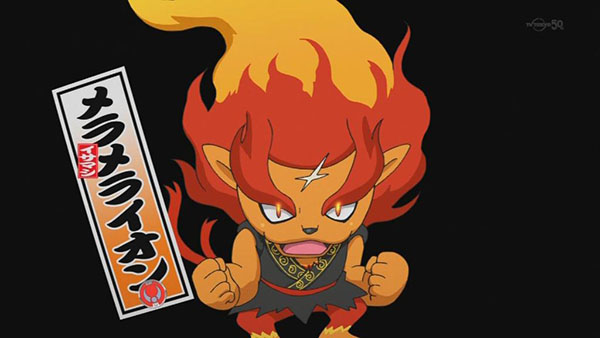 The episode opens up with Manjimutt being released from prison and being greeted by Nathan and Whisper. They ask him what his next plan is and he exclaims that he intends to become; A Pastry Chef! By becoming a pastry chef, Manjimutt assures himself that he’ll get all the ladies, this time for sure. He gets so engrossed in his fantasy his face becomes dog-like, surprising Nathan and Whisper. Unfortunately he once again fails at his charade and finds himself back under the clutches of the police department.

Nathan and his friends are at school and it’s time to clean up the garden. When the teacher asks who is going to volunteer to clean up, everyone shows an uninterested attitude. That is until a mysterious shadow, hiding behind the trash can shows up and pounces onto Nathan.

When it looks like nobody is going to volunteer, Nathan jumps up, fire in his eyes, immediately volunteering his group. Everyone on his team is surprised by his enthusiasm. Then when his teacher asks for another volunteer, he volunteers himself again, then again, THEN AGAIN! He volunteers to do everything. Moving quickly he cleans all around, surprising everyone.

Whisper notices a shadowy figure behind Nathan, although per usual fails to know what it is. Calling out to it he tells it to get away from Nathan. The Yo-Kai then growls and jumps onto Eddie, firing him up now instead.

Nathan wonders what is going on with his friend. Whisper exclaims that his the Yo-Kai jumped into his friend and fired him up. Using the Yo-Kai Watch, Nanthan uncovers that it is the Yo-Kai Blazion.

Nathan then calls out his friend, Hungramps to have a talk with Blazion. After they talk things over for a while, Blazion leaves Eddy only to posses Katie. This causes things to get tense, so Whisper suggests Nathan call out Happier, who uses his power to calm Katie and Blazion down. Blazion leaves Katie, who is immediately much calmer. Blazion, happily gives Nathan his medal.

Nathan is at home with a toothache and that he needs to see the dentist. Later at school his friends tell him that the dentist is a really cool one and he should have no problem. That Evening Nathan and Whisper go to Dr. Smiles office. The dentist seems to be acting weird and Nathan suspects it must be a Yo-Kai. It turns out to be the Yo-Kai Negatibuzz.

In repose to this, Nathan calls out Blazion to help fight off Negatibuzz’s negative energy and helps the dentist get fired up about dentistry again.

Nathan, Bear, and Eddie are all having a sleepover. Jibanyan is curious about what the boys have in store but is thrilled when he finds out that they will be watching pretty girls having a bubble bath party.

Suddenly the channel changes and everyone wonders what had just happened. Bear grabs the remote to change it back, but the channel switches back to cooking right away. Whisper whispers to Nathan that it might be a Yo-Kai, and Nathan searches the area immediately, uncovering the Yo-Kai Signibble. Signibble is capable of controlling electricity and is of course making the channel change. Jibanyan decides to take this guy on head to head, causing havoc with the vacuum and sucking up Whisper on accident. Nathan grabs the vacuum just in time for his parents to come into the room and for Signibble to turn back on the illicit After-Hours channel for his parents to see.

Blazion is a hot headed and firey lion with a personality to match. Those he inspirits become overly motivated to the point of confusing others. He is of the Tough type.

Negatibuzz is a mosquito looking Yo-Kai. When he possesses someone they become depressed and unsure of themselves. Negatibuzz is of the Shady group.

Signibble is a small humanoid looking Yo-Kai with the ability to control and mess with electricity and electric devices like TVs. It is of the Mysterious group.