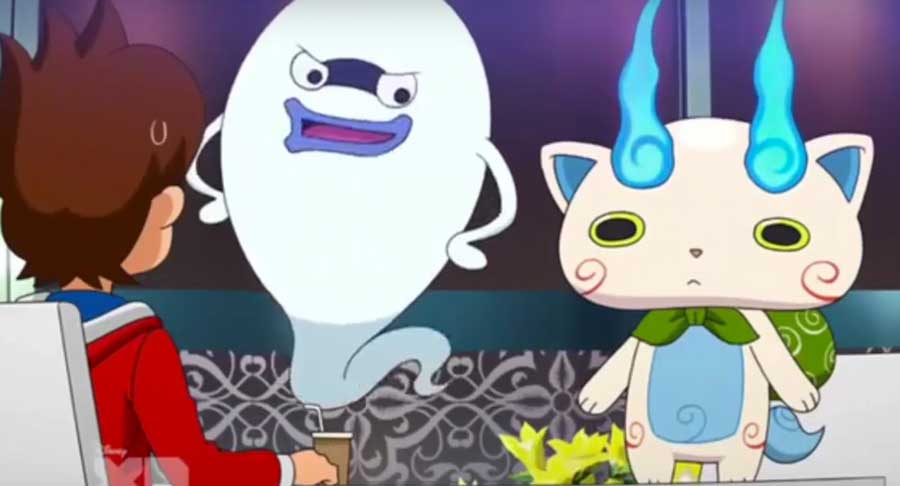 Manjimutt is released from prison, again, and finds he has a new goal. People never appreciated him because he is an artist. He decides to move to the country to make pottery, but the police are called again, as Manjimutt had broken into a pottery studio to preform his artistic endeavors.

Nathan is eagerly waiting to get his ice cream cone, when he gets it he finds that it is one swirl too short. Finding this weird, he believes it is a Yo-Kai at fault and uses his watch to search the restaurant counter. He uncovers the Yo-Kai Komasan. Komasan is harmless and when Whisper and Nathan talk to him, they find out why he is taking the ice cream swirls. Komasan explains that it is his most favourite food and while he was waiting in the Japanese Gardens all he could think about is the delicious Ice Cream.

Komasan explains that the Japanese Gardens were torn down and because of this he decided to leave the country for a while to explore the city. Nathan and Whisper decide that maybe if they show Komasan the city he’ll feel better and go back to the countryside. Komasan agrees and they explore the city together, but it’s quite terrifying for the country boy and he feels like it might be best he just returns to the country.

Going onto the train, Komasan says his farewells and gives Nathan his medal. Later when walking home, Nathan spots Komasan’s green bag and calls him using the Yo-Kai Watch. Komasan is very upset to be back in the city.

At school, Nathan is taking a test, but every time he thinks he might have the answer, he hears a voice in his head that says, “Nuh, uh, uh..” At first he figured it might be nothing, but it keeps happening. Other students seem to have the same doubt he does and he uses the Yo-Kai watch to search the room. He uncovers the Yo-Kai Trio, the Nosirs.

Nathan thanks them and the Nosirs find themselves confused and distraught as they question themselves. Now having lost the will to contradict, they decide to leave. Well, all but one, who finds himself a new home in Nathan’s Yo-Kai watch, being the one to tell Nathan when a medal has been put in the wrong way.

Komasan’s catch phrase is changed from Monge to Oh My Swirls.

Komasan is a Pretty type. He is a white dog like creature inspired and based on the Japanese statues the Komainu. Komasan is a country bumpkin who finds himself scared and amazed by practically anything. In the Japanese version of the series, Komasan comments nearly to anything that amazes him with the word; monge!! In the English localization this has been changed to “Oh my swirls!!!”.

Nosirs are an Eerie type. They are a trio of male looking figures with large noses, one of which has a booger coming out of his nose. The trio comment and cause insecurity and confusion to those they inspirit.