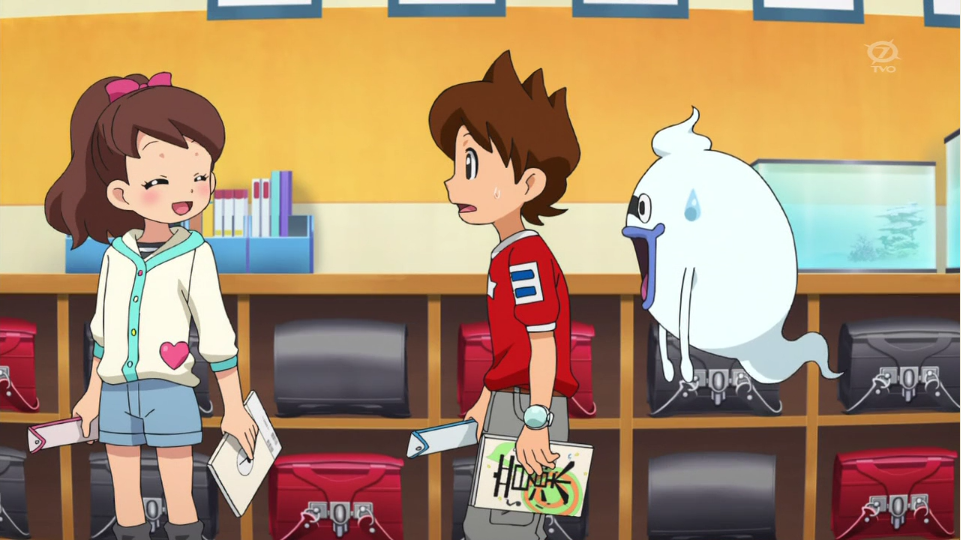 Another great episode, another amazing localization. Once again, the bulk of changes are simple edits to background text or cultural mentions. That’s really the greatest effort of the localization team, keeping the original content in solid form, and they really should be commended for that.

This episode starts with Nathan Adams receiving the Medallium from Whisper, then stumbling upon Katie, who is eating a jumbo hotdog. Whisper tells Nathan not to say anything when Katie says she looks terrible, but Nathan agrees with Katie, hurting her feelings. Nathan realizes it’s a Yo-kai making Katie think the food at the convenience store is “edible”.

They quickly move to the convenience store, and Whisper says he doesn’t think a Yo-kai is behind it. As he finishes saying this, Nathan finds Hungramps, a Yo-kai who makes people so hungry that they’ll snack on everything on front of them.

Nathan walks up to the Yo-kai, and starts to talk to him about Katie. Whisper pulls him to the side and tells him he needs to seem serious; Hungramps responds “HOW DARE YOU?!”. Nathan starts to explain the problem, but Hungramps is asleep.

Hungramps says he can’t stop inspiriting the store, as he can’t move from the spot. Nathan asks for him to share his story, and Hungramps falls asleep. Nathan summons Tattletell to force him to tell his story.

Hungramps stops Tattletell by asking her how she’s been, revealing they’ve been friends for a long time. Tattletell jumps on him regardless, forcing Hungramps to tell his story. Hungramps has a granddaughter, a beautiful little girl, who he used to bring to the store when she was little.

But when she started school, she started hanging out with her friends, instead of Hungramps. When he died, he left everyone behind; he just wants to see her one last time.

Hungramps says he lost a lot of his memories when he became a Yo-kai, and so he makes people come to eat at the store because he thinks he’d recognize her if she was right in front of him. Hungramps agrees, but spots his granddaughter while walking away. She says she loves him, misses him, and wishes she spent more time with him.

Hungramps gives Nathan his medal, a thanks for his help. On the way home, he sees Katie jogging. Whisper and Nathan walk home.

Nathan is at school, and realizes that everyone has forgotten something – Katie has forgotten her pencil case, Nathan his backpack, and his teacher forgot to change out of his pajamas. He scans the teacher, and finds a Yo-kai named Wazzat, who feeds on memories, making people forget things.

Whisper attacks Wazzat, and forgets he told Nathan about Wazzat, repeating himself over and over again. Katie is still upset about what Nathan said, and rejects Nathan when he calls out. Wazzat attacks Katie, causing her to forget about what Nathan said earlier. Wazzat immediately makes Whisper forget everything again, and flies away.

Wazzat flies in, and makes the teacher forget that he was giving a test – Whisper reprimands Nathan for abusing Yo-kai for his personal use.

Wazzat explains that he started out as a hat, until one day, fashion changed, and his previous owner through him away. She walked away, forgetting he existed, turning the hat into Wazzat. He sobs, telling Nathan that he used Wazzat, and is now throwing him out too.

Wazzat starts to attack, and Nathan tries to summon Jibanyan, He accidentally summons Manjimutt, who is immediately attacked by Wazzat, who says his memories taste awful. Wazzat passes out, and gives up. Nathan says he just wants to be his friend, and Wazzat soon accepts him after Nathan gives him his word that he wants to be his friend. Wazzat gives Nathan his medal, saying “I believe in you”.

Nathan follows Manjimutt to his new store as a hair stylist. After a few days, the store is ruined – all of his customers were dogs. Manjimutt then decides to become a fashion photographer after Whisper reads that the job is in the “top five careers to meet a woman” article in a magazine.

Changes continue to be very minimal, which is great for this sort of work. Yo-kai Watch depends so much on Japanese culture that there were some fears the localization would make jokes hit or miss, and that some cultural concepts would be missing from the US mindset.

So far, that hasn’t been a problem. All the edits have largely been simple kana/kanji removal  or replacing of background elements with US elements (such as the replacement of kanji in the background of Nate’s classroom with pictures of US historical figures).

A few small incidental changes were noticed, such as the change from a mouse-mascot warning sign outside the shop to a general advertisement for what looks like orange juice, and the change of frontage sign for that particular convenience store:

As said before, wonderful localization efforts, and we can’t wait to see what the rest of the episodes are like. Great job team! Thanks again to the wonderful BDT87. We’ll see you at the end of the week! For more, please join us at the Yo-kai Watch Wiki!