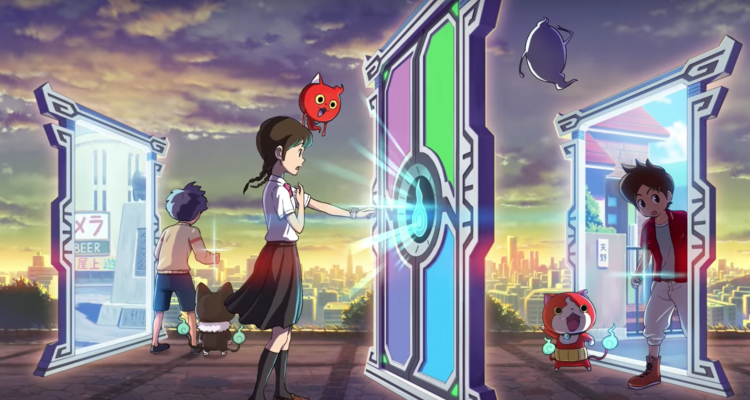 What is up Yo-kai Watch Fans! For those who haven’t been checking in lately to the news site, I’ve got everything covered for you in this reading so be sure to stay and know what to look for in the coming months.

Yo-kai Watch 4 has been revealed for Japan!!!

Finally, the next Yo-kai Watch game for Japan has been dated for release in Winter of 2018 to continue Keita/Nate’s adventure with Whisper and Jibanyan. More information has finally been leaked and from what we know, the game will allow players to travel between 3 different “worlds” where each have their own protagonist and corresponding Yo-kai companion. With a new item to the game known as the Yo-kai Ark, this will allow players to visit different time periods (notably 3) and have adventures throughout time, literally. More specifically, there will be Keita/Nate’s world which is the present day following the storyline of previous games, Shin’s world whose world is based on the movie Yo-kai Watch : Forever Friends, and Natsume’s world which will take 30 years after Keita’s world. Based on the reveal trailer and community research, this Natsume character is Keita/Nate’s daughter 30 years into the future and has a Yo-kai similar looking to Jibanyan known as Junior. Speaking of which, Shin also has a special Yo-kai Nekomata that he will be traveling with. It seems that Shin’s world is also the most mysterious of the other two connecting timelines in terms of context or gameplay which we will find out more into the future.

Sadly, I had to keep reiterating that this is a Japanese release as Level-5 has different plans for Western fans this upcoming year. And when I mean “other plans,” I really do mean it as Yo-kai Watch 3 hasn’t even been fully confirmed yet. We don’t if they have plans for a new installment to the core games anytime late this year because of the whole 3DS to Nintendo Switch transition that have many people speculating on what the thoughts of Level-5 are. Especially considering that a new spin off game for Western fans is coming soon (keep reading for more info “Yo-kai Watch Blasters!!”).

It seems that for Western fans, Level-5 isn’t making it easy to keep Yo-kai Watch fans busy while waiting for all the games and releases we are praying on. Yo-kai Watch Wibble Wobble, a mobile Yo-kai Watch game whose popularity among fans were very enthusiastic, has now long since disappeared on the 31st of May this year. Some have even claimed the mobile game to be better than the core games but for newcomers just getting into the groove or game completionist like myself still busy with a game released 4 years ago, we’ll never know.

The Japanese Yo-kai Watch scene has been getting a lot of love this year as a new mobile game exclusive to Japan has been released under the name Yo-kai Watch World. It brings back the good old days of Pokemon GO but for Yo-kai Watch now. It uses the real time GPS to track the player movements throughout the world and player venture to capture, battle, and level up Yo-kai within the real world now. Luckily, not all hope has been lost for a western release as their have been some consideration for a western localization so make sure to go on Level-5’s social media to show your support for a potential western release! There also have been attempts to play the game in the western regions but the optimization was admittedly not the greatest but rightfully so. Regardless, with more advancements and releases for Yo-kai Watch, it means that something is in the works at Level-5 so Western fans let us keep our heads up in hopes of more things to come.

While it has been a bit of a letdown for Western fans this year regarding Yo-kai Watch, we are getting some love back to us with the new releases of Yo-kai Watch Blasters: White Dog Squad & Yo-kai Watch Blasters: Red Cat Corps. These spin off titles to the core games will be released for the 3DS on Sept. 7 so keep your calendar marked for when they come out. The game is supposed to give more emphasis on gameplay with your Yo-kai with multiplayer friends at some cost of “storyline.” A quick recap list of features include:

Don’t think we left you out anime fans because I sure am one of them. Yo-kai Watch’s third season premiere had taken place in July 2nd. On our previous article we discussed major plots and what to look forward to. Make sure to let me know if you think the season so far is a make or break. For those looking to get viewing right now, make sure to check out our previous article on the upcoming anime summary with all the details! Until then, stay cool with Yo-kai Watch this summer!

Kai is pretty tall, if you consider 6'3 tall, game enthusiast that also loves to create music and write about games in his spar time currently in California. He especially loves binge watching the anime series of Yokai Watch.

How To Get Usapyon Racing Gear Tutorial by AbdallahSmash026 This Yo-kai Watch Blasters Tutorial Guide shows...More

How To Get Usapyon Scuba Gear in Yo-kai Watch Blasters shown in this tutorial by AbdallahSmash026...More