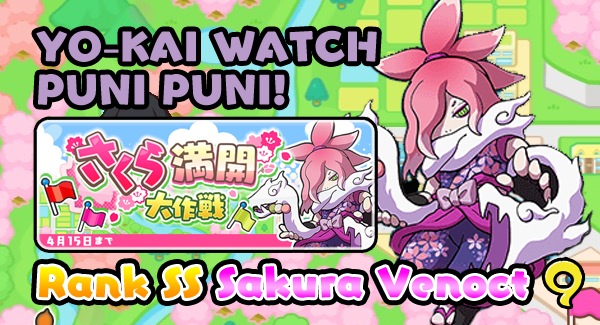 The Sakura Orochi (Sakura Venoct) Scramble Battle is a new Scramble Battle event in which players pick one of three teams (Hanasakajii, Hanako-san, or Hanahojin) and fight to collect Cherry Blossom petals!
~Schedule~

This Scramble Battle will consist of 5 rounds:

The Sakura Crank (avaliable until April 15th) gives you the opportunity to befriend Sakura Orochi, a SS Rank Yo-kai of the Mysterious Tribe. His soultimate move is very powerful, automatically linking up Wib Wob to get to Fever Time! His skill also boosts the power of Mysterious Tribe Yo-kai on your team. If you pull him, he’ll come in handy in a pinch for sure!

If you place high enough, or you’re strong enough to beat his secret stage, you can befriend Hoteison, another SS rank Yo-kai of the Mysterious Tribe, and one of the Seven Lucky Yo-kai Gods. His soultimate move raises the attack of the Yo-kai on your team, while his Skill causes more of his Wib Wob to fall into the field. He could come in handy when doing Score Attack or when you need the extra strength in a normal stage.

You should also check out some of the Yo-kai that can give you a hand in gathering Cherry Blossom Petals, like Marshal Bully, Noroino Hanako, or Yomi Gensui!

(Special Thanks to Lynn for translation help)