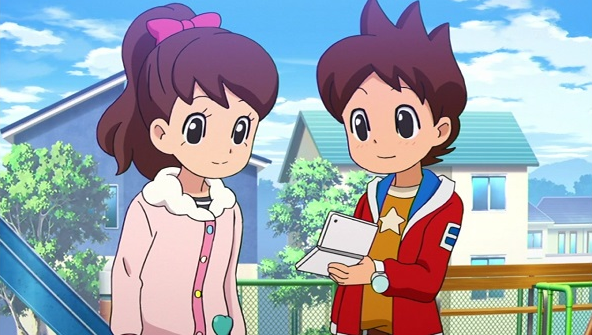 Yo-kai Watch, the first game in the massive hit Nintendo 3DS game series by Level-5, has finally released (November 6th, 2015) in the United States to English speaking audiences! It’s available from all major game retailers as well as downloadable on the Nintendo 3DS eshop. If you picked up the game, let us know what you think on twitter @watchofyokai and don’t forget to join the Watch of Yokai forum and discuss the game with other fans!

You’ll quickly see why Yo-kai Watch is so popular the moment the game starts. The graphics, world, music, sounds, and story draw you in immediately. Vibrant cut scenes, brilliant voice acting, funny jokes and puns, and an exciting story greet you right away after you select and name your main character. The game does an excellent job of introducing players to the new world of Yo-kai. Stories about Yo-kai are from Japanese mythology, and there’s absolutely no problem understanding the concepts world wide! The writing team has done a top notch job of localization while retaining all of the charms and appeal of the original concept.

The first 20 minutes of the game make excellent work of setting up the story line, explaining yo-kai, and teaching the player what they need to know to succeed all without feeling like a tutorial at all! Yo-kai Watch also has lots of guiding help in place for younger players; If you’re not sure where to go during the main storyline the game will tell you (at the bottom of theta screen) the most recent main story objective (or goal) and also provide arrows and flags on the map pointing you were to go next. This functionality frees up the game to appeal to players young and old. Younger players will be able to follow along with ease, while older players will really enjoy the immense amount of freedom and strategy the game also provides.

Yo-kai Watch excels at providing an interesting and clever battle system. You’ll summon your six team Yo-kai into battle with a chance to feed a potential yo-kai friend and win them over. Yo-kai will battle on their own using basic attacks, inspirting techniques, and passive skills to overwhelm the opponent. When the time is right you’ll unleash your Yo-kai’s Soultimate attacks by playing one of the mini tasks on the bottom touch screen. Swirling around your yo-kai with the stylus, tracing out patterns as quick as you can, or tapping on glowing energy orbs to power up. You’ll also play similar mini tasks to purify your team and earn extra exp during battle!

You’ll also be able to control many other aspects of your Yo-kai friend’s personalities and abilities by giving them exp orbs, talismans, and books, teaming them up in various ways, evolving and fusing! There’s so much you’ll learn and a lot of fun to be had! We’re all sure to be talking Yo-kai all year long!