KOMASAN IN THE CITY: DJKJ 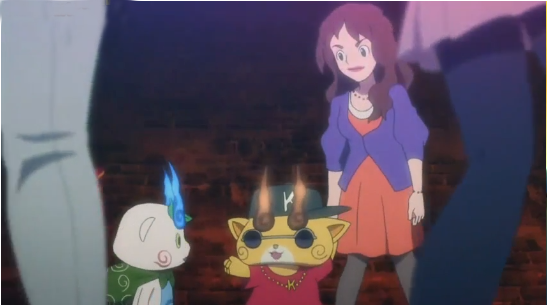 Komasan and Komajiro are walking down the street when Komajiro gets a call. He speaks in weird city slang and hangs up. Komasan, having not understood what is going on asks his brother who explains that he goes to a place with lights and dancing. Komasan thinks this means a traditional Japanese dance but Komajiro offers to take his brother and they end up heading to a night club. Komasan is surprised at how strange his brother dresses and acts but respects that his brother is growing up and changing. After all he somehow got a human girlfriend. 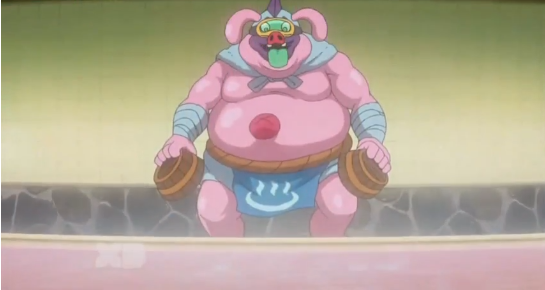 Nate and his friends are at the Hot Springs when they realize that the water is quite warm and making them dizzy. It’s uncharacteristic of it to be that hot so Nate uses his watch and immediately finds the Yo-Kai Sproink. Sproink loves it when the water is so hot and he doesn’t care if anyone doesn’t like it either. If you want him to move, best make him. Nate takes on this challenge and calls out Blazion who, with his fiery heat and perseverance should be able to handle the hot water with ease. Unfortunately when Blazion steps into the water he becomes an aide to make it hotter, even changing into a fountain and releasing hot water.

Next Nate tried Roughraff who completely fails in his goals and ends up attacked by Sproink. Whisper suggests they just leave until they notice Sproink feeling hot and dizzy. It seems an old man has taken over the hot spring and decided to make it so hot not even Sproink (or anyone else) can enjoy it. 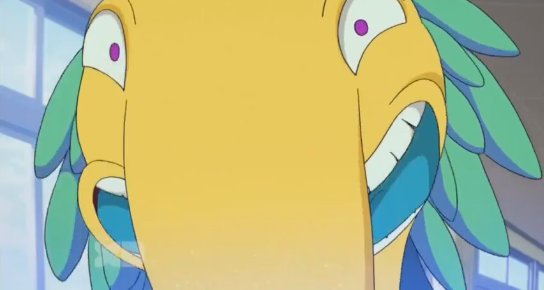 While in class, Nate has to pee. The bell rings but his teacher starts talking about everything he can. It worries the class and prompts Katie to remind the teacher it is time to leave. Nate has to pee so bad he can’t stand it. Luckily his teacher lets them go and Nate is free to leave. While leaving though he encounters Katie who asks Nate if he knows what was up with the teacher. He also has no idea but before he can really respond, Katie begins to talk and babble a lot like the teacher did before. Feeling this has to be a Yo-Kai, Nate uses his watch and uncovers Babblong.

Babblong talks and talks and talks but eventually he is taken outside where Nate can deal with him. Well, almost. Before he is about to summon Jibanyan, Nate is inspirited by Babblong and begins babbling a lot, preventing Jibanyan from being summoned. On the other end of the watch, a portal waits and Jibanyan eagerly is ready to help Nate in his time of need. It takes so long Jibanyan just runs over to Nate and gives him a good wake up call. It doesn’t help, though. Whisper decides they should summon Wazzat to prevent Babblong from remembering what he was talking about… Sadly Nate is still stuck babbling and so they trick Nate into summoning Wazzat for them. Wazzat makes Babblong forget all of his words and he runs away… only to come over to Nate’s house the next morning with a bunch of new stories to tell. 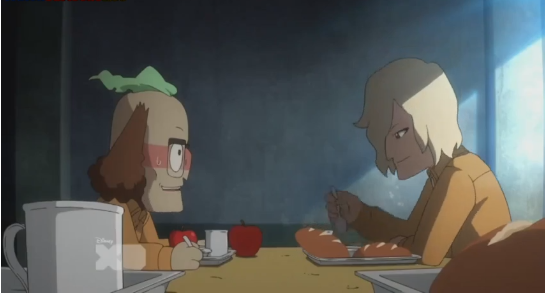 Manjimutt introduces us to his new and true friend, Charlie, a man in prison for Petty Theft. While eating lunch with Charlie a big brute man walks up behind Manjimutt and pulls him away.

Sproink is a big Yo-Kai that loves to make the Onsen water super hot. He’s also a boss Yo-Kai in the games and isn’t a member of any tribe.

Babblong is one crazy talker. Those he inspirits will find themselves babbling about anything they can. He is responsible for all those long stories about people you don’t know (or care about). He is a Slippery Yo-Kai.