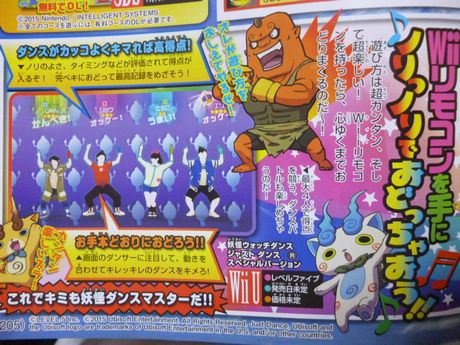 This was a product of the surprisingly delightful collaboration of Level-5 and Ubisoft. In this month’s issue, CoroCoro Magazine reports that Just Dance Special Version is moving in to help the Wii U sales in Japan. It also shows a bit of the game’s dancing that will allow cooperative and competitive play for up to four players in the series’ infamous “Gera Gera Po” dance. It will feature popular tunes and dance routines from the Yo-kai Watch series.

Yo-Kai Watch in this special edition will be Yo-kai Watch Dance. Just Dance characters will be themed as Yo-Kai Watch characters as expected. This would be a first for Level-5 to work with Nintendo’s latest home console. This is among the several Just Dance titles to arrive on the Wii U in case of Ubisoft.

At the moment, Yo-Kai Watch Dance is confirmed for Japan but, no release date has been announced as, Just Dance Special Version is in development for Wii U. The price is not known for now.

It was confirmed in April that Yo-Kai Watch for 3DS would be released locally in 2016. August 19th, there was an announcement that Yo-Kai Watch’s first Nintendo 3DS game is scheduled to release in the US on November 6th.