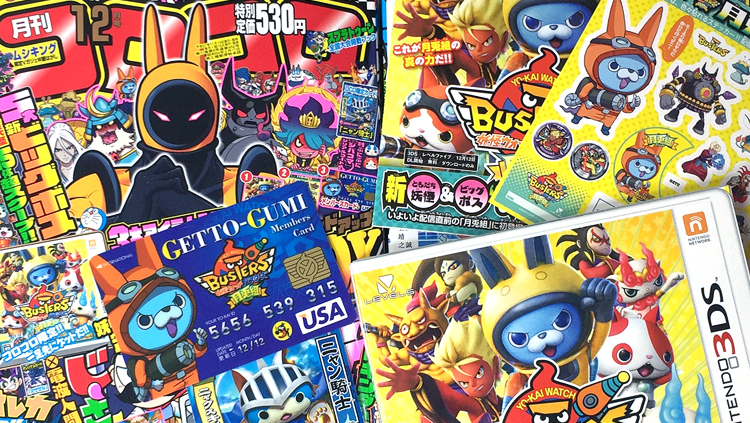 ~ This article may contain spoilers about the ongoing Yo-kai Watch storyline! ~

The December 2015 issue of CoroCoro Comics is here! CoroCoro ( コロコロコミック ) is a monthly manga magazine which serializes many shonen comic book series including Yo-kai Watch and Yo-kai Watch Busters in Japanese. This month’s issue comes packed with Yo-kai Watch Busters Gettogumi ( 妖怪ウォッチバスターズ月兎組 ) extras (called furoku・ふろく) and news about the upcoming free DLC expansion that fans are excited for! The actual DLC expansion will release via Japan’s Nintendo eShop on December 12th, 2015. This is a BIG Happy Holidays for Yo-kai Watch fans!

Because this DLC update for Akanekodan ( 赤猫団 ) and Shiroinutai ( 白犬隊 ) versions is so huge, and because it’s digital download only, CoroCoro gave fans a “mock” game box that compliments the boxes and art of the two versions. As a Yo-kai Watch goods collector this is really exciting, it will look great along side any gamer or toy collector shelf display.

Also included with this issue and box are a Nyankishi arcade game card, a Jibakoma password for Yo-kai Watch PuniPuni, and a pretend B-USApyon “Getto-gumi Members Card.”

• エンマ大王 (Enma Daioh) has a secret tribe and role. The reigning king of the Yo-kai realm. He is capable of incredible power.

• ブリー元帥 (Bully-gensui) an Isamashi/Brave tribe Ranger. Bully-taicho has become hugely successful, and now he leads the Busters as a Commander-in-Chief.

• キンタロニャン (Kintaro-nyan) a Goketsu/Tough tribe Attacker. A cat yo-kai that wields a huge axe that he swings around to fight. Even one blow delivers massive power!

• ツチノコ星人 (Tsuchinoko-seijin) a Nyororon/Slippery tribe Ranger. A new species of Tsuchinoko that came from outer space. A very rare yo-kai that rarely comes out.

• シメッポイーナ(Shimeppoiina) a Bukimi/Eerie tribe Healer. She makes surroundings feel dank. When the mood drops you can recover stamina.

• モズク先生 (Mozuku-sensei) a Pokapoka/Hearful Healer. An elder in the world of seaweed yo-kai. He’s a veteran at dancing to heal his friends.

• 鬼蜘蛛 (Onigumo) an Isamashi/Brave Attacker. A two-horned Tsuchigumo who obtained the power of an Oni. His fighting technique is very useful against bosses. 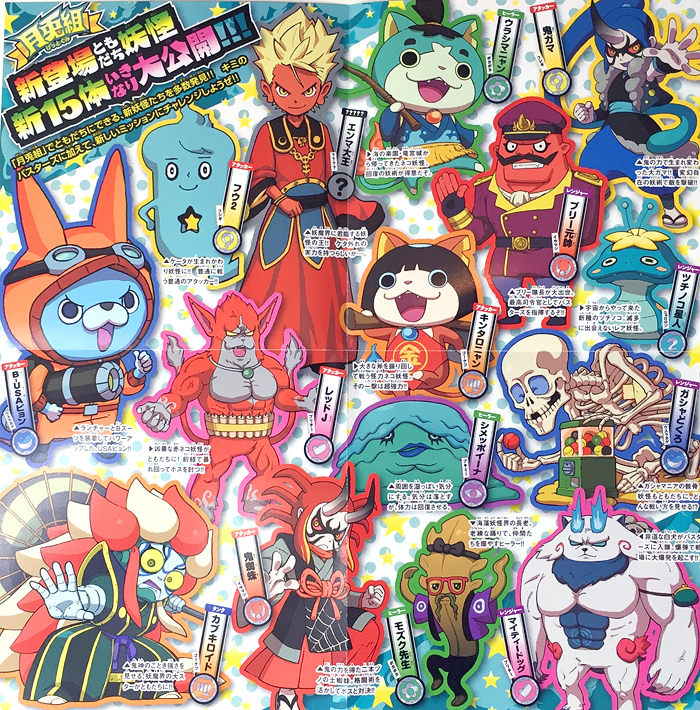 • レッドJ (Red J) a Pretty/Charming tribe Attacker. You can finally become friends with this red berserker cat! He’ll go on a rampage at the frontlines.

• マイティードッグ (Mighty Dog) a Pretty/Charming tribe Ranger. This brutal white dog can now enlist with the Busters! He’ll use bombs on the battlefield to create huge explosions.

• ガシャどくろ (Gashadokuro) an Usurakage/Shady Ranger. Now you can become friends with this gasha obsessed skeleton yo-kai! We can’t wait to see how he fights!?

• カブキロイド (Kabukiloid) a Goketsu/Tough tribe Tank. With his demonic toughness this big star of the yo-kai realm can be your friend!

• キャプテンサンダー (Captain Thunder) is a big muscular boss that looks like USApyon, the same way that Red J and Mighty Dog resemble our friends Jibanyan and Komasan.

• ぬらりひょん (Nyurarihyon) is a big yo-kai, second to Enma in the yo-kai Realm!! The Power he possesses is unknown.

• ブシ王 (Bushioh) the huge sword on this berserk samurai’s back can slice through anything.

Also mentioned in this issue of CoroCoro is that there will be new collectible gasha medals available in December featuring yo-kai who are the stars of the newest Yo-kai Watch movie 「妖怪ウォッチ エンマ大王と5つの物語だニャン！」(Yo-kai Watch: Enma Daioh to itsutsu no Monogatari danyan! – “Yo-kai Watch: King Enma and the Five Legendary Tales ~Nyan!) releasing in Japan. Speaking of medals, you can nab the new B-USApyon Busters medal included with the January 2016 issue of CoroCoro Comics!