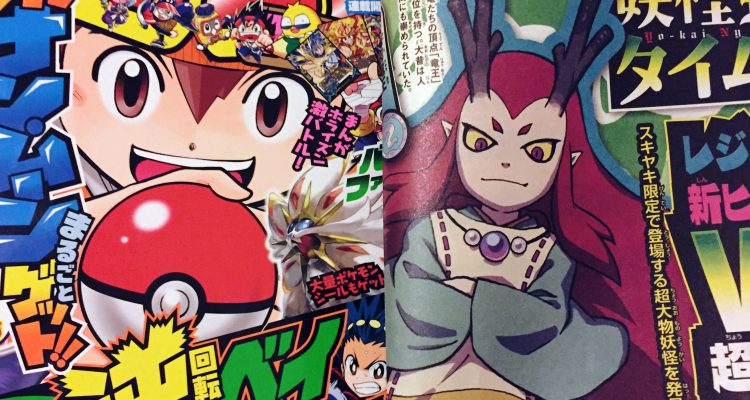 The December 2016 issue of CoroCoro Comics brings us more Yo-kai Watch 3 Sukiyaki, Busters T, and Sushi/Tempura Update details! Even if you’ve already seen some leaked images, keep reading as we have a lot more detail from the full news pages and insert that you probably haven’t heard about yet now that the full issue has released!

The biggest news of the issue is the reveal of six new characters… first, new Sukiyaki exclusive Hero and Legend yo-kai;

☆ ワルノリン (Warunorin) a Pretty/Charming tribe yokai, a shadowy Hero yo-kai that’s secretly been active in the underworld (you’ll also meet him in Buster’s T dungeons?!) and…

☆ 難陀竜王 (Nandaryuuou / Dragon King Nanda) a Nyororon/Slippery tribe Legend yo-kai, he holds the highest position among all dragons as the “Dragon King” and was even worshipped by humans of ancient times.

☆ テレテル坊主 (Tereterubouzu) a Pokapoka/Heartful tribe yo-kai, when he’s inspiring everyone around will feel embarrassed and unable to speak. (his name is a pun on the words for embarrassment and Teruterubouzu which is a rather cute ghost like decoration that is hung out during rainy days with the hopes that the sun will return the next day)

☆ ミカエリ (Mikaeri) a Pokapoka/Heartful tribe yo-kai, quite a shrewd yo-kai that will immediately ask for recompense for every little thing. (her name is a pun on a word for recompense)

…and of course a new Nyan and Koma yo-kai duo based on none other than Superman and Batman.

☆ ヒーローニャン (Hero Nyan) an Isamashi/Brave tribe yo-kai, a masked hero that will protect the peace in his town… but what is his true identity?

☆ ダークコマー (Dark Koma) an Usurakage/Shady tribe yo-kai, if you’d rather aim for a dark hero, here’s a masked hero in training.

* Unfortunately it seems that these two superhero yo-kai will only be obtainable in Japan if you have access to the Yo-kai Watch Busters Tekkigun (妖怪ウォッチバスターズ 鉄鬼軍) arcade game. 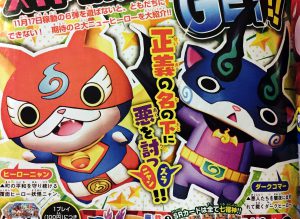 This news is tucked away as an aside, but we at Watch of Yo-kai are happy to see her return… Exclusive to Sukiyaki will be a quest in which you’ll be able to play as Fumika as the lead role. Upon completion of this special quest you’ll also befriend the new yo-kai ミーフー (Miifuu… Fumika’s Fuu2 counterpart). It is also mentioned that if you encounter Mack while playing as Fumika, you’ll also meet up with Fuu2. It is not clear yet if players will be able to continue to play the storyline or even play in the end game as Fumika, only this special Miifuu quest is mentioned, for now. 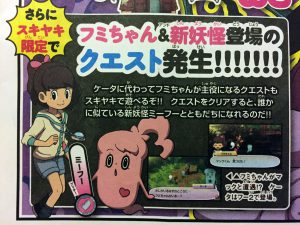 ⚫︎ The news insert also let’s players know to expect a special linking event to occur when you link together all three versions of Yo-kai Watch 3, Sushi, Tempura, AND Sukiyaki.

⚫︎ It also mentions that a set of 10 gasha/crank-a-kai coins will be available to download (in-game) on the same day as Sukiyaki’s release (Dec. 15) to help provide a jump start toward a strong team for all of the new players who may be starting to play for the first time on that day!

⚫︎ If you live in Japan, special coins will also be available as TSUTAYA starting distribution on release day (December 15th, 2016) and running through the end of March 2017!

As we already learned from a previous CoroCoro issue, the package (physical) version of Sukiyaki will ship with an exclusive 覚醒エンマ (Awakened Enma) Dream medal, while the download version will come with a code allowing players to befriend USA豆腐 (Usadoufu, an USAPyon with a helmet made of tofu!). And, if you’re a Yo-kai Watch 3 Sushi or Tempura version player, you’ll also find that those two versions will also be changing in big ways with the upcoming update which releases concurrently with Sukiyaki’s release (December 15th, 2016).

Just as with the previous Busters games, in Busters T mode you’ll be able to co-op play, online, with up to four other people. You’ll explore never before seen dungeons along the quest for treasure in a place (continent) called Nuu (ヌー大陸 / Nuu Tairiku). Some of these never-before-seen areas include: An ancient pyramid, an old european style mansion, and a space rocket!?

Many new elements of gameplay are also hinted at, such as the Busters Jeep and setting up base camps. These base camps will be your staging and preparations area before you enter a dungeon, and will also be the place where you prepare and wait for your teammates during online play.

We’re also re-introduced to some of the characters we reported on last time as well as some new!

As you might have guessed, all the best treasure is guarded by some pretty epic looking bosses!

☆ 八つ裂鬼 (Yatsuzaki) – he’s a demon that swings around two twin hatchets… you’ll definitely need help from a full team to take down this guy who’s name is a pun that means “to tear limb from limb” … yikes!

☆ クロノオーメン (Chronoomen) – this guardian wears the mask of a Pharaoh… but when his mask slips down, will we see his real self!?

☆ ホゲホエール (HogeWhale) – this flying whale is a boss from the most recent movie, Flying Whale and the Double World.

We learned all about the other Lucky Gods a while back, and then of course met some of them in our games… well we finally get to see the final two; 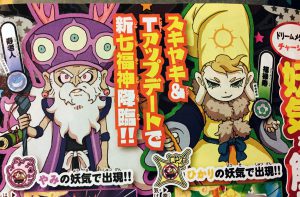 Keep an eye out for these RARE medals!

⚫︎ Keep your eyes peels for those CoroCoro Comics January 2017 issue preorders to become available, they will be shipping out with an exclusive Fuyunyan Dream Medal which will contain a QR Code to befriend Fuyunyan S! 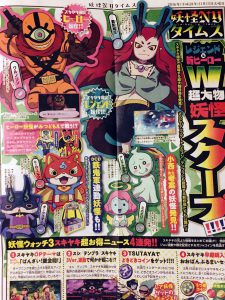 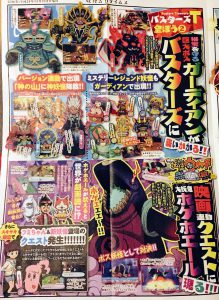 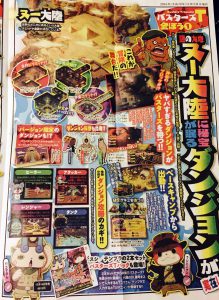