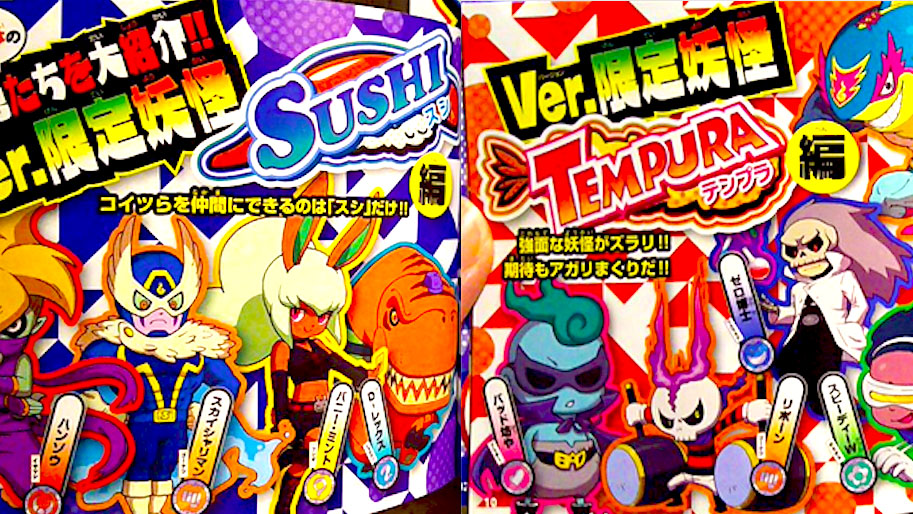 It’s that time again, we have some details from leaked images (CoroCoro June 2016, which will officially release/ship on May 14th in Japan). We will have many more details for you when the issue is finally out.

☆ 酒呑童子 (Shuten-douji) S-rank, Fushigi/Mysterious tribe classic yokai that will be available in both Tempura and Sushi versions. He has the power and charisma to make other demons follow him.

☆ ハンゾウ (Hanzou) S-rank, Isamashi/Brave tribe ‘Merican yokai that will only be available in Sushi version. He trained long and hard to surpass even the best ninja. An American styled Ninja.

☆ バニー・ミント (Bunny Mint) S-rank, Fushigi/Mysterious tribe ‘Merican yokai that will only be available in Sushi version. A special agent for and American organization, she makes full use of her beauty and skills to infiltrate any location.

☆ ラストブシニャン (Last Bushinyan) S-rank, Isamashi/Brave tribe ‘Merican Legend yokai that will be available in both Tempura and Sushi versions. He traveled from Japan to America doing “Last Samurai” activities. He fought alongside Bushinyan under the same master.

☆ あしゅら (Asura) S-rank, Isamashi/Brave tribe Legend yokai that will only available in Tempura version. A mythical lord being from India.

☆ ブルジョンG?? (Name guess… not fully shown in leak) S-rank, PokaPoka/Heartful tribe ‘Merican Legend yokai that will be available in both Tempura and Sushi versions. A millionaire yokai that throws out large bills.

Some other yokai mentioned are; Sushi Only: Skyshariman, D-Rex, Kontan, Origin, Otonakai among others, and Tempura Only: The Shark, Rebone, Speedy W, Oki Raccoon, Sakichan… among others. Many of the new yokai are styled as Fighters and Super Heros.

More details will be posted soon, after the magazine’s official release!

A new item called the Yokai Blaster is shown, and there is mention of a new functionality called “Dream Link.” If yokai watch parts are installed, the performance changes to an attack mode. It is shown being used to shoot a Super Hero styled Zombie boss.