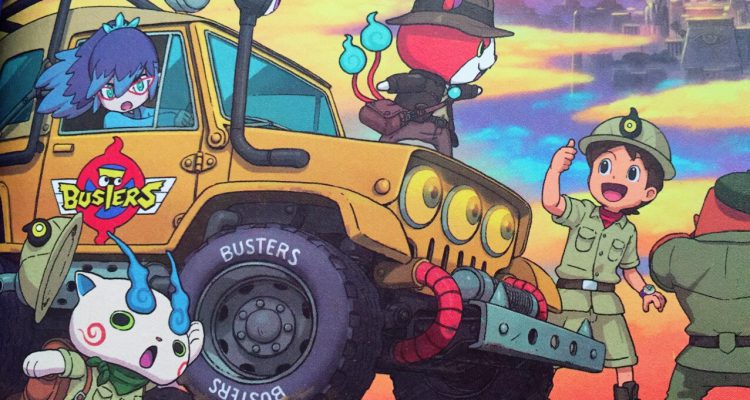 A couple of months ago, fans were treated to the first of the three BIG updates for Yo-kai Watch 3 Sushi and Tempura (which also coincided with the release of Yo-kai Watch 3 Sukiyaki). Along with a sprinkling of new side quests and storyline elements, we were introduced to the next big thing in Yo-kai Busters continuity, Yo-kai Watch Busters T (the Busters games and play modes are known as Blasters in the west).

This new update has laid down a lot of the ground work toward making the Yo-kai Watch 3 installment one that will keep yo-kai fans content and entertained for a long time once Level-5 moves into its “long break” phase regarding the franchise. They seem to be trying to leave fans with as much content, freedom, fun, and as many playmodes as possible -and we have two more updates to go! Fans are looking forward to Kemamoto (Harrisville) and Nagasaki (San Fantastico) areas to finally unlock in the next update.

With that, let’s take a deeper look into Busters T and just how much fun and freedom it brings to Yo-kai Watch 3 players. 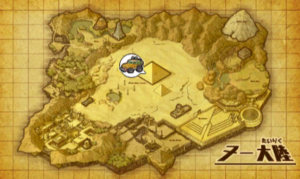 The T in Busters T stands for Treasure; Obtaining rare treasures is, of course, the overall main goal of the playmode. Like other Buster’s playmodes and games in the past, T missions are on a timer, though this timer is much more constraining than previous installments. Many fans have complained about this fact, but this timer exists with good reason; Busters T opens up the opportunity for players to collect up many very powerful items that intensely simplify the main gameplay. 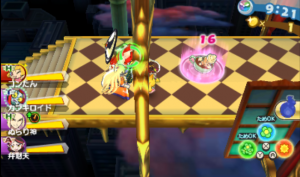 The strict time limit serves to balance out this powerful resource.

Treasure boxes hidden throughout (and sometimes attached to yokai) are scattered around each “floor” of each “dungeon.” Most boxes will contain a main game piece of equipment, high value kokeshi dolls (used to generate money, or to store money for when it is needed later if your maximum funds amount is reached), foods, and books, making this a great way to stock up on those times. 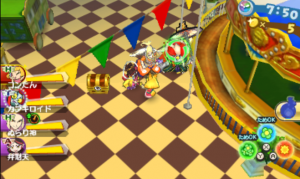 Boxes may also contain energy droplets (used to equip auras that will assist you in dungeons in a variety of ways; such as increased brefriending, infinite stamina, higher chance to find “Nu-Parts” and much more), Busters T mode-only equippable weapons and shields, as well as consumables such as befriending potion, trap revealing elixir, maps, and stamina drinks. Lastly, on more rare occasions boxes will contain an actual “ancient treasure” called “Nu-Parts” which will transform into one of three special prizes (each dungeon will have different items available) at the end of the cleared dungeon.

At the end of a successfully cleared dungeon, all of a players obtained “Nu-Parts” turn into rare or uncommon yo-kai, rare Busters weapons, powerful yo-kai hold items for main game mode, or one of five intensely powerful items that carry over into the main game. 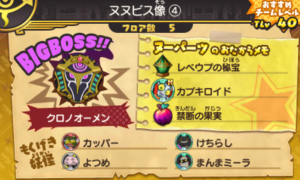 Probably the most valuable item, for those working hard to complete their Daijiten/Medalliums is the  “Forbidden Fruit.” Forbidden Fruit is essentially the “Master Ball” of the Yo-kai Watch series, any yo-kai that eats this fruit is guaranteed to become your friend at the end of battle.

The remaining four most powerful items are used when talking to Denjin (Signiton) in the Busters T main camp; 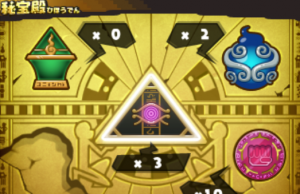 ★ Level Up Treasure (レベウプの秘宝) – A green gem item which can be used to level up yo-kai (leveling up several levels at a time, much more powerful than exorbs)

★ Rank Up Treasure (アゲランクの秘宝）– A black pyramid shaped item that will increase a yo-kai rank by one step at a time (this is the player’s chance to rank up their favorite low rank yo-kai so that they are more viable in battle!)

★ Technique Research Treasure (ワザキワムの秘宝）– A magenta coin shaped item that will increase all of a yo-kai’s skill levels (attack, magic, and soultimate) to max.

Each of these five items, along with the increased access to rare S rank yo-kai, books, and high value kokeshi dolls really blows the lid off of any difficulties a player may have had in completing the main story mode and quests in Yo-kai Watch 3.

In the next article we will go over Busters T gameplay elements as well as offer tips and tricks that will greatly improve your Busters T success and rewards.