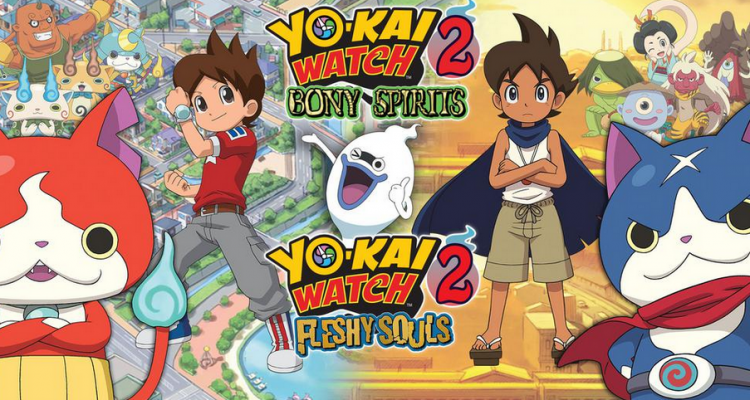 The Yo-kai Watch 2 Bony Spirits and Fleshy Souls official webpage reconfirms a lot of details on the version exclusives and plot lines that we reported on in some of our previous articles. And now provides useful pre-order links for fans! You can visit the official page HERE and take a peek at some of the new screen captures of how the game will look.

You’ll be meeting over 350 new and returning yo-kai friends, and traveling back in time 60 years to meet up with classic yo-kai! The page also confirms the retention of the working train system and reveals the new town names of Harrisville (for ケマモト / Kemamoto) and San Fantastico (for ナギサキ / Nagisaki)!

Robonyan F will be unlockable for those who purchase the digital download version of Bony Spirits, while Sailornyan will be unlockable with the purchase of the digital download version of Fleshy Souls. Fans who buy the retail versions of the game will get exclusive Jibanyan Yo-Motion medals instead, which also contain qr-codes that will allow players to change Jibanyan’s soultimate move, in-game. Nyaight (ニャイーン / Nyaiin) for Bony Spirits and Nyext (ニョエー / Nyoee) for Fleshy Souls!

Fans who own the first Yo-kai Watch game for Nintendo 3DS will also be able to get one of three yo-kai: Buchinyan, Komasan (with travel bag), or Noko (with bowtie). The official website seems to indicate players will only get to choose one of these three options… which is a big departure from the original Japanese game, where players were able to get all three as they progressed farther and farther along in the game, eventually being able to get all three by the end of the game. Possibly the information that English language players will only be able to obtain one of these three is a typo. We’ll be able to confirm this later when the game releases! Let’s all hope for the best!