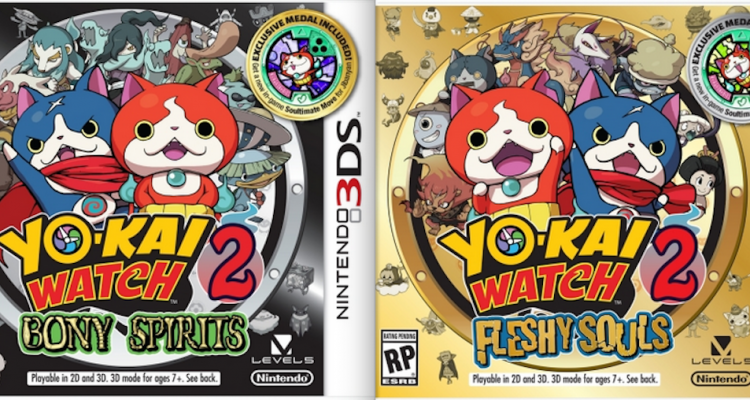 All wrapped up in some San Diego Comic Con news today, fans discovered that the physical copies of the two versions of Yo-kai Watch 2, Fleshy Souls and Bony Spirits will come with exclusive Jibanyan yo-kai medals. Each of these exclusive medals will also contain a qr code that unlocks the ability to change Jibanyan’s Soultimate move.

The Jibanyan move that comes with Bony Spirits is a very powerful attack that strikes all three of the opposing yo-kai in battle, while the move that comes with Fleshy Souls is a “self destruct” attack that will harm and most likely defeat all six of the yo-kai currently on screen… including those on your own team! In Japan these attacks were named ニャイーン (Nyaiin) and ニョエー (Nyoee).

Fans of the original Japanese versions will notice that 本家 (Honke / Fleshy Souls) version originally came with a different Jibanyan medal and attack, called コマニャチ (Komanyachi). No word yet on why this change was made, and how North American fans will obtain that medal and attack. The “self destruct” medal originally came with the Type Zero watch in Japan; perhaps the two were swapped, and fans can expect to see the Komanyachi medal when the new line of toys releases?

If you’ll be going for the downloadable digital versions instead; you’ll instead get a code that will let you meet and befriend Sailornyan in Fleshy Souls, and Robonyan F in Bony Spirits! So be sure to plan accordingly!

Fans that are lucky enough to attend San Diego Comic Con will have a chance to meet voice actors Alicyn Packard, J.W. Terry and Melissa Hutchison, who provide the voices for Jibanyan, Whisper and Komasan, in both the Yo-kai Watch games as well as the anime.

Attendees who visit the Play Nintendo Family Lounge can also get the opportunity to play Yo-kai Watch 2 in English, ahead of its release on September 30th, 2016!