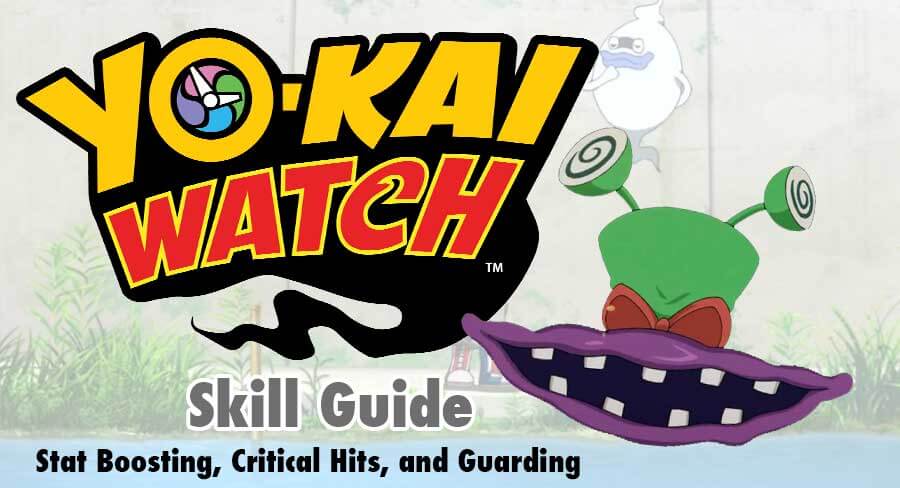 All Yo-Kai become unable to dodge, even ones with the abilities Wavy Body, Dodge, and Pompadour! Eterna, Everfore and, Grumples have the skill Oldness Zone.

This skill allows Hornaplenty, Rhinoggin, Rhinormous, and, Sushiyama to attack with normal damage to any non-Boss Yo-Kai you’re fighting, even if they are guarding.

Sense of Smell and Eye Sight A

These Yo-Kai will never miss a hit, even if the opponent has the skills Dodge and Wavy Body. Kyuubi, Frostail, and Cuttincheez can take this to their keen sense of smell while Singcada uses his great eyesight.

Cadin and Cadable are very modest, so they don’t stand out and are targeted less.

Steppa, Rhyth, and Wiglin can dodge enemy attacks over half the time thanks to their wavy bodies.

When you spin the member circle, going from the rear line to the front line, Walladin, Noway, Impass, and Robonyan will guard until your next turn.

Wazzat causes everyone (allies and enemies) to forget how to guard… unless they are a boss.

Dumkapp can predict his opponent’s movements so he is harder to hit with attacks, techniques, and Soultimate moves.

Baddinyan is so bad (to the bone), he dodges all Earthsplitter, Headsmack, and Headbutt Techniques, unless Oldness zone is in effect.

Boosting stats in the midst of a battle can be a very useful way of winning against your opponent. By learning how and when Yo-Kai are able to boost their stats during battle is useful for taking advantage.

If Mochismo or Minochi suffer a critical hit, they will gain a defense boost for the next five turns.

Boosts all stats when the enemy hits you with an inspirit. Neighfarious, Dismarelda, Damona, and Snee

Azure Dragon and Dragon Lord will gain strength and spirit boosts if their HP drops below 25%.

Jibanyan, B3-NK1, Benkei, and Snartle gain spirit and strength whenever they KO an enemy.

When an ally gets KO’d, Siro, Blazion, Komashura, and Quaken will get a strength and spirit boost for the next five turns. This activates once per turn, so if two allies are knocked out during the same turn, you get one stat boost.

This skill is used strictly by Komasan and Komane. When they are next to a Yo-Kai with the skill Omega they will gain a large spirit boost.

Much like Alpha,Komajiro and Komiger gain a strength boost when they are next to a Yo-Kai with Alpha.

Ake, Payn, Agon, Shogunyan, Count Cavity, and Gilgaros will hit you where it hurts. When they inflict a critical hit, the move’s effect is boosted 1.5x.

Undy, Tanbo, and Pandle are all very careless. This makes them easier to take critical hits.

Gleam and Sheen are two swordsman who’s skill makes sure that they land critical hits much more often than other Yo-Kai.

How To Get Komajiro S in Yo-kai Watch 2 Psychic Specters!

Learn How To Get Komajiro S in Yo-kai Watch 2 Psychic Specters with this family-friendly...More