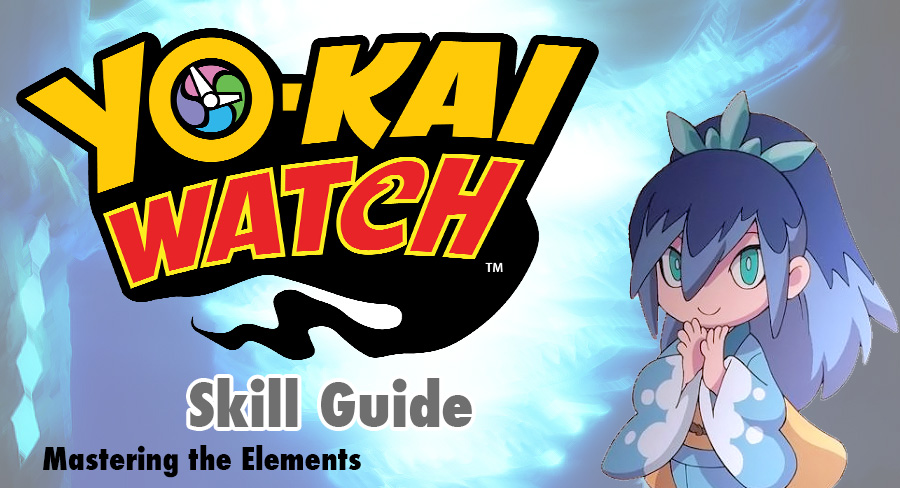 Most of how a Yo-Kai will sustain damage is how strong it is against a certain type of element. For example, a Yo-Kai like BLAZION will be highly immune to fire type attacks but considerably weaker to water attacks. Some Yo-Kai are masters of the elements and use their elemental powers to guard themselves from damage or hit with an even stronger elemental force.

All of the resistances protect the same percentage (70%), just in a different element.

Tengloom uses his book as a windshield to protect himself from them wind, while Leadoni and Mynimo can use their arms to guard them from wind.

Alhail and Slush are already frozen, so Ice doesn’t hurt them much anyways.

Drizzle and Droplette, are literally giant water monsters, so any water attack thrown at them will hardly hurt. Rageon and Fishpicable are fish, so water is their natural habitat.

Dromp‘s earth like body allows him to take most of the Lightning damage he takes without harm.

Swelterier and Copperled know how to protect themselves from fire.

Castelius III is safe against Earth and Wind elements from really harming him.

In that vain, there are some Yo-Kai who posess great strengths in their home element, and because of that, their elemental attacks get a boost of 1.2x.

Buhu, Flumpy, and Tengu are masters of wind, and gain a boost to their wind techniques and attacks.

Signibble and Signiton use their powers of harnessing electricity to give their lightning attacks a boost.

Tunatic and Flengu‘s skill offers them a boost to their fire type moves.

Snotsolong gains a boost to his water attacks, probably because he used to be a duck.

If you are feeling cold, Blizzaria, Duchoo, and Frostina might have given you an even icier chill with their ice boost.

Appak, Chillhuahua, Ol’ Fortune, Pupsicle, Skreek, Supyo don’t gain a boost to their attacks, but their attacks are so powerful they don’t become hindered by another Yo-Kai’s defenses.

How To Get Komajiro S in Yo-kai Watch 2 Psychic Specters!

Learn How To Get Komajiro S in Yo-kai Watch 2 Psychic Specters with this family-friendly...More

Have you been stuck on YO-KAI WATCH 2 for a while with 100% completing the...More

No Comments on "Yo-kai Skill Guide: Mastering the Elements"