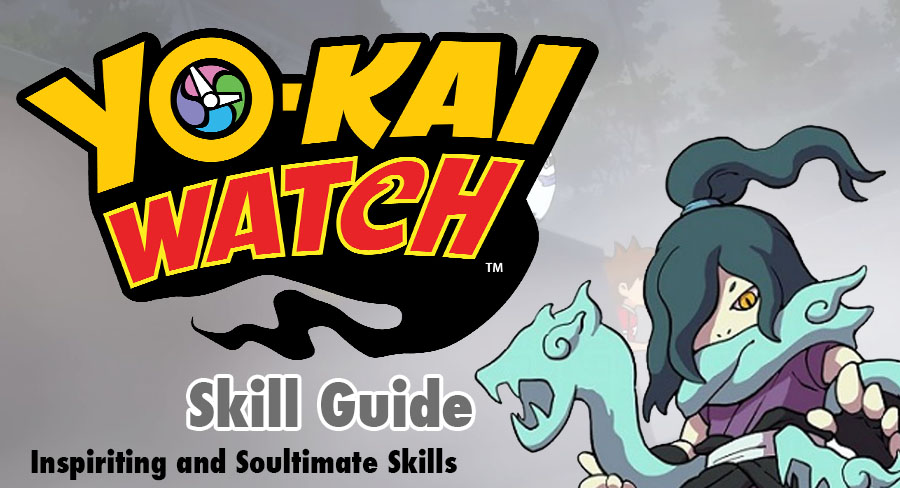 Inspiriting and Soultimate Moves are two solid ways of attacking in the midst of battle. Various Yo-Kai rely on either making sure they use their Soultimate move often or Inspirit as much as they can to win in battle. This part of the guide will give you a quick look at what kind of Yo-Kai have skills that benefit them when they come against or use Inspirits or Soultimate type moves.

Inspiriting can be a good way of boosting stats for you or an ally or inflicting a terrible status like a head cold (which lowers HP). Inspiriting is what the Yo-Kai do to you if you meet them, and it’s their key ability when they mess around with humans. Taking advantage of when a Yo-Kai inspirits you or how they inspirit you can be quite important. Some Yo-Kai can’t be hurt by a negative Inspirt while others might by able to steal all the good inspirits that are passed around by anyone, like Greesel.

Greesel will take all the good inspirits used on both allies or enemies and take them for himself. If there are two Greesel in battle, the Greesel that takes the inspirit will be randomized. It can’t be used on Soultimate moves or in boss battles.

Awevil can inspirt anything or anyone, even if they have Miraculous Scales or a Matchless Shell.

Soultimate Moves are the signature attack of each Yo-Kai. They are the strongest and most powerful attack or status moves any Yo-Kai can use. Unfortunately there are only two skills in the game that aide with Soultimate moves, both both are very good and can help in either defending or making quick and consistent use of filling your Soul Meter.

Confuze and Daiz are completely unharmed by your opponents Soultimate moves.

Venoct gains 10 Soultimate Points every time he finishes any kind of action.

To read about other kinds of Yo-Kai and their skills, see these other articles below!
– Reflecting Skills
– Skills for EXP, Items, and Money!

No Comments on "Yo-Kai Skill Guide: Inspirit and Soultimate Skills"