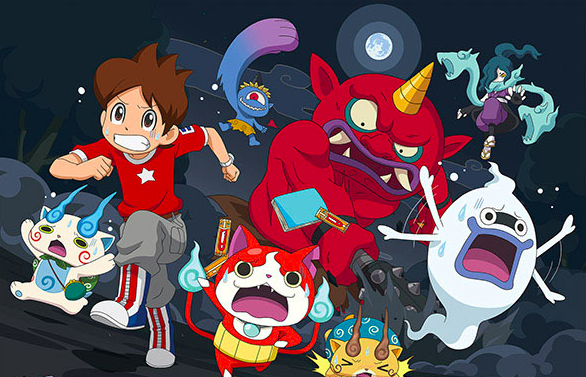 When a game series that has already been out for a while in another country, like Japan, finally releases in other languages it can be a really unique experience for new fans to both experience a game for the first time, but also be able to clearly see what’s in store for us in future games! It’s important to support first installments like these so we can also get these great sequel games and spin offs that are often even better than their predecessors. Yo-kai Watch is most definitely a series to keep a close eye on, there’s a lot to explore and play with both in the first game, and in future installments!

One really clear example of how Yo-kai Watch will be evolving for new players as the series of games progresses is the first games daily event called “Terror Time”. The general premise is that at some point during the night (at random times) you’ll be thrust into a nightmare version of your town. The maps and landmarks will all be the same, but all the other humans and yo-kai are gone, leaving only you, some sentinel yokai who will alert the Oni, and a giant red demon boss known as an Oni!

The singular objective for the player in “Terror Time” is to sneak past all the sentinels and the Red Oni undetected as you collect treasure box items (and in later games, demon orbs). Collect as many as you can before you’re spotted and make a mad dash for the golden exit gate! The more you successfully exit with, the better your rewards may be! If you get caught, you’ll lose everything you grabbed. In later games you’ll also play an extra special gacha machine for ultra powerful new yo-kai friends and very rare items!

What’s even more exciting it how the base idea of this mini-event from the first game evolves with each sequel and spin off game! In the sequel games of Yokai Watch 2, in addition to the usual Terror Time events with orbs, they will be adding a side (optional) gameplay mode called “Yokai Watch Busters” where you can take your favorite yo-kai friends you’ve met in the main gameplay into a slightly more complex “Terror Time” situation where you, as your yo-kai friend (alone or with others in cooperative play!), not only collect orbs, but also fight other yo-kai, demons, and a variety of different big bosses right there on the overland map! It’s a completely new way to battle with yo-kai!

Beyond Yokai Watch 2 the spin off games also called Yokai Watch Busters expand even more generously on this concept to be a full and compelling game all it’s own! This time you ARE the yo-kai main character and you’ll put together your own team of yo-kai friends you’ll meet to go on exploratory patrols through town or on missions to take down mischievous yo-kai and big bosses! You’ll definitely be doing a lot more than just dodging past sentinels and collecting orbs! There are also very strong online cooperative play modes that are sure to become very popular and really expand the spin offs into games that offer endless hours of play.

No Comments on "Yo-Kai Launch Week, The Evolution of Terror Time"