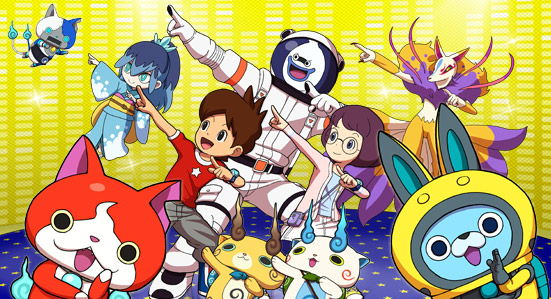 “Yo-kai Watch Dance – JUST DANCE Special Version” ( 妖怪ウォッチダンスJUSTDANCEスペシャルバージョン ) by Level-5 and Ubisoft will be releasing for the WiiU on December 5th in Japan. Like other games in the JUST DANCE franchise, gameplay is pretty simple, you do your best to dance along with the characters on screen… but this time, you’ll be dancing to a complete Yo-kai Watch soundtrack! If you are unfamiliar with the JUST DANCE games, they are a dancing rhythm style game, except that you use your entire body and don’t need a special game pad.

As a genre, rhythm and dance games are considered fairly niche (specific fan base), so it is puzzling and sometimes worrying, that some game creators use these types of games to gauge fan interest in home console versions of their most popular games.

Recently Level-5 CEO Akihiro Hino mentioned the possibility of bringing titles like “Yo-kai Watch” over to Nintendo NX or WiiU systems, presumably if there is a desire and a market for it. The concern now, among fans, is that the sales of this JUST DANCE game might sway the decision. Fans who love Yo-kai Watch and the music the franchise produces may not necessarily enjoy a physical dancing game, but would leap at the chance to buy a home console version of their favorite main line Yo-kai Watch game.

Another game that recently released for WiiU is “Amiibo Festival” (for the Animal Crossing franchise) and Animal Crossing Wild World, City Folk, and New Leaf fans were left wondering why they were being offered what amounts to a “fancy board game” rather than a full main line game with the same full town and game play they have come to love deeply over the years.

The sense in the Animal Crossing fandom is that they didn’t really ask for, nor want a game like “Amiibo Festival”, but at the same time there is also the worry that Nintendo may be using this title to gauge fan interest in the release of a full game that everyone was actually waiting for. This is a tough and uncomfortable spot to put fans in, they aren’t going to want to spend money and time on a game that isn’t exactly what they want, but they may also be denied the main game they’re seeking for not “showing fan interest” with their dollars on the inferior game offerings.

With home console interest waning, we think it’s high time our favorite game creators step up and finally release our favorite games for home consoles rather than feeding us all of these smaller niche games to limited interest. We stay loyal to them, and we feel this sentiment should be reciprocated.