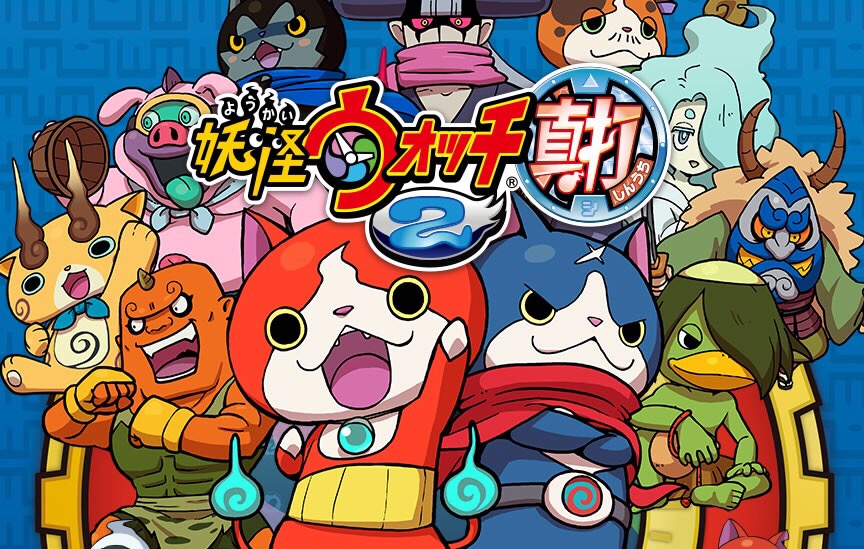 You’ll want to gather around for this one, because we have some great things to talk about… Actually, just one thing: Yo-kai Watch 2!

While Yo-kai Watch 2 hasn’t been announced yet for English language release, we are all waiting eagerly for the day that does happen. Some fans are still on the fence about the franchise and game, and we honestly don’t blame them! The original, immense popularity of Yo-kai Watch in Japan really took off greatly after the second game, Yo-kai Watch 2, and there are a lot of reasons for that.

Yo-kai Watch 2 was originally released in Japan as three separate but similar versions: 本家・Honke, 元祖・Ganso, and 真打・Shinuchi, with Shinuchi coming later than the other two. Honke and Ganso shared the same storyline but with very minor story differences and exclusive yokai; Shinuchi was the same, but had additional content and was released later. This release style is similar to the way that Pokemon Sapphire and Ruby were released as the same game along with Pokemon Emerald later on with added special content.

As you may have guessed, with this new splintering off of versions, Yo-kai Watch 2 really picked up the slack regarding online and cooperative play modes that fans had been left wanting in the first game. Each version has a small number of exclusive yokai you can trade locally or online with friends. The storyline also changes slightly if you play as Keita/Nate or Fumika/Katie, so plan on playing as both characters when the time comes! There are also “download version” and “game linking” (if you own multiple versions yourself, you can register the games to each other to unlock more) exclusive yokai and areas.

Glad you asked! Some of the exciting new features in Yo-kai Watch 2 are…

・ Lots of new yo-kai friends, rares, and legendary! Including, finally, some classic yo-kai from Japanese mythology!

・ New maps and areas to explore, the same world you remember from the first game, but expanded! (and with some new secrets to find… such as the ability to walk on walls to reach formerly inaccessible areas)

・ More mini-games and events to enjoy! You’ll uncover mysterious riddles, night time dance troops, secret doors, and and a spooky, endless tunnel with secret story that will unfold each time you enter (you’ll meet rare yo-kai there as well!). Your adventures around town will require a keen eye and an explorer’s heart.

・ An actual working train system! This is more fun than it sounds, not only does it add to the fun and immersion of the gameplay, but you’ll meet human and yo-kai neighbors alike each time you ride… and maybe even get cool items and meet rare friends. Eventually you might end up on some very special trains, including one that will take you to Geragera Land (Shinuchi).

・ A whole new dynamic spin on the old battle system. You’ll start off battling the usual way, but later in the story you’ll be able to use the new Type-Zero Watch which gives you more power and tools when battling and befriending yo-kai! If you became bored with the old watch, this new one is sure to catch your attention.

・ Online battling with new, more challenging battle rules: You’ll finally be able to battle online with your favorite Yo-kai, and locally, you’ll get a taste of the new Shin Busters ~ Yo-kai Watch Busters play mode (which will eventually be retooled into the full spin off games of Yo-kai Watch Busters).

・ Lots more yummy food and new hold items! Some of your yo-kai friends have new favorite foods, they make us hungry just looking at them… especially that stack of dessert pancakes! YUM! Some new powerful hold items make team building even more fun.

・ Some new boss battles of course, and we’ll get much deeper into the lore and history of yo-kai!

・ An almost “Back to the Future“-esque storyline… wait, does that mean TIME TRAVEL? Yes it does! No spoilers!

How To Get Moximous K in Yo-kai Watch 2 Psychic Specters!

Learn How To Get Moximous K in Yo-kai Watch 2 Psychic Specters with this family-friendly...More