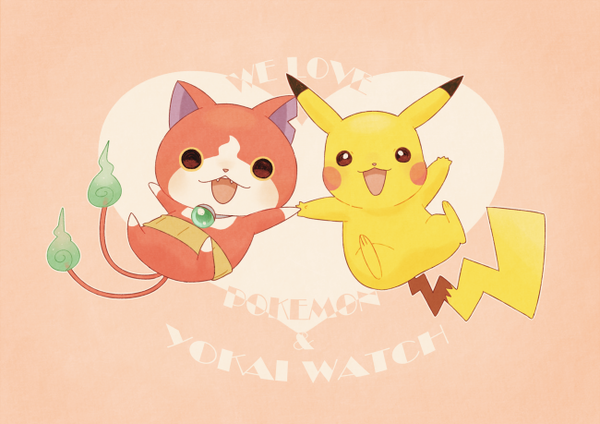 “They can coexist. While it doesn’t look like YW has the popularity in the west (at least so far), they are attempting to do different things. It’s not an either/or situation.”

Ever since the massive news of Yo-kai Watch 2 outselling Pokemon Omega Ruby/Alpha Sapphire in Japan, the franchise has gained attention from some Pokemon and video game fans in general, leaving them shocked and wondering what Yo-kai Watch is all about. When Yo-kai Watch was first announced to the public at E3 2015, people acted unfavorably, with comments revolving around a suspicion that Yo-kai Watch was a Pokemon ripoff and that it made a mockery of their long-standing, favorite franchise.

Where does this suspicion and out-of-hand rejection stem from and why do people act harshly towards Yo-kai Watch? A similar mindset can be traced back to another monster collecting RPG that debuted long before Yo-kai Watch released, Digimon.

Originally a spinoff of the popular Tamagotchi digital pet toy, Digimon involves unique creatures living in a digital world that originated from Earth’s communication networks. The main protagonist of Digimon, Tai Kamiya, and other kids use their Digimon to fight the evil that infects digital networks. The anime was largely responsible for the original success of Digimon. Despite Digimon having a unique concept, it was considered, by most gaming fans, to be a ripoff of Pokemon, which caused Digimon’s popularity to quickly decline.

The frequency of people being concerned that Yo-kai Watch is a “Pokemon rip-off” may soar, especially with the upcoming virtual console re-releases of Pokemon R/B/Y on the Nintendo eShop in early 2016 and the widely anticipated Pokemon Go “competing” for attention in the market. These developments (fueled by disinformation) do not help Yo-kai Watch’s budding fan-base among English-speaking fans, especially with people also complaining of Yo-kai Watch anime censorship outside of Japan. It is a shame if this inaccurate critique continues to spread, as gamers will be missing out on the entirely unique, charming experience that Yo-kai Watch brings to the table. If Japanese fans are able to enjoy both and support Yo-kai Watch and Pokemon, Jibanyan could become just as well-loved internationally as Pikachu.

Let’s analyze the criticism earnestly; For something to be called a Pokemon ripoff, it would have to directly copy the exact elements of Pokemon without a hint of originality. Pocket Monster Saga, for example, is a game that recently released on the App Store which copies elements and character designs from Pokemon; a true ripoff  that would likely receive huge negative attention from those who play and love Pokemon: 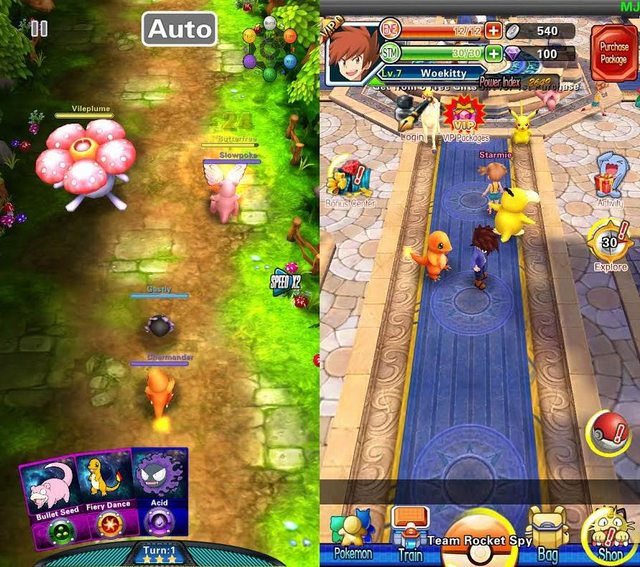 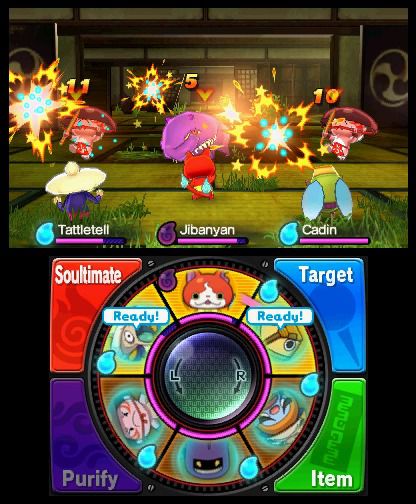 When it comes to this battle system, Yo-kai Watch is a turn-based, auto-battle RPG that requires the player to interact with the Yo-kai using team building, items, and mini actions to pull off special moves (called Soultimate attacks). By rotating the wheel you can decide which three of your Yo-kai friends should battle at a given time. Useful team match-ups are a more subtle, yet rewarding task than in other games in the genre. You are more of a coach to your Yo-kai, here to support them with careful planning and manipulation to win battles, rather than directly deciding each move in Pokemon, requiring the player to be constantly active.

Unlike Pokemon’s goal of catching Pokemon and becoming a Pokemon master, Yo-kai Watch’s goal revolves around befriending spirit-like creatures called Yo-kai, that retain their autonomy and can be called upon for assistance using their calling cards called medals. These creatures are responsible for the daily annoyances people encounter in life (based on actual mythical creatures from folklore and re-popularized by the late Shigeru Mizuki). To stop their shenanigans, one must defeat and befriend the Yo-kai to collect their medal. Each Yo-kai comes from different tribes and types that reflect their characteristics and personalities. 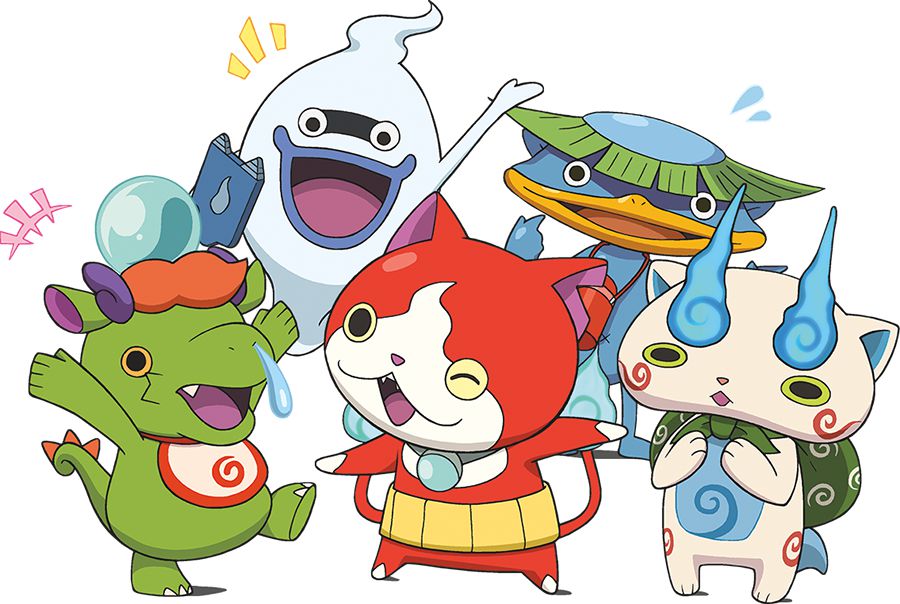 The many Yo-kai you can find in Yo-kai Watch

The first Yo-kai Watch game takes place in one gigantic city that players are able to explore freely to look for Yo-kai. Yo-kai can be found by searching trees, grassy parks, beaches, homes, light posts, vending machines, trash cans, and even sewers to discover different types. 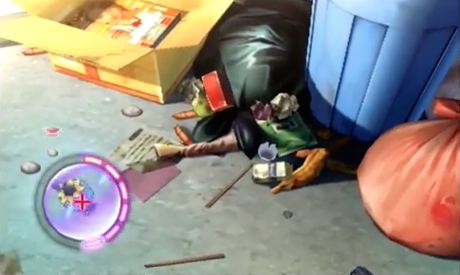 Yo-kai Watch has its own identity and charm that makes it stand out from Pokemon, yet the game still receives negative commentary from the Pokemon community which is not yet familiar with the game. Common are negative comments such as:

Negative reception to Nintendo of America’s Twitter and the Yo-kai Watch advertising.

The gaming community in general sees this game as a threat to Pokemon. Why do people feel threatened about it exactly? There a few reasons that can explain this behavior:

There has not been another monster collecting franchise that has come close to touching Pokemon’s popularity in a very long time, until the Yo-kai Watch games released to Japan. The gaming and Pokemon community wants Yo-kai Watch to fade away from popularity because they think that two games of the same genre cannot coexist. Just because a demographic likes one thing doesn’t mean they will automatically like another. To some fans, there is no overlap; you’re either with them, or against them. This behavior is not the first to happen, as media debates like Star Wars versus Star Trek have occurred before.

Over the course of the past two years, Yo-kai Watch’s popularity has slowly grown and eventually came to dominate the gaming market in Japan, with Yo-kai Watch 2 (Honke, Ganso, and Shinuchi) in particular managing to outsell the most recent Pokemon games (Omega Ruby and Alpha Sapphire) in Japan. These sales numbers were the start for  Yo-kai Watch that led the news media to believe and spread the notion that Yo-kai Watch was the Pokemon killer. That is where some of the reflexive fear and rejection of Yo-kai Watch comes from. Despite it being a natural and likely temporary occurrence for something fresh and new to temporarily take center stage while first making a name for itself.

There are many long time and hardcore Pokemon fans who do not have these same negative reservations and have played have enjoyed Yo-kai Watch for its own charm and do not find it to be a Pokemon clone at all. This stark contrast of opinions among Pokemon fans’ reception of Yo-kai Watch has had somewhat of a polarizing effect in social media. ShinyLinoone, one such Pokemon and Yo-kai Watch fan says that the negativity makes the Pokemon fandom feel less hospitable and off track:

“I am ashamed to call myself a Pokémon fan. Sure, we have fandoms who make bad fanart, or annoy the living **** out of others, but we have never before had a fandom make an attempt at causing the failure of another franchise – and succeed to a degree. The Pokémon fandom is objectively the worst fandom ever.”

There has been a lot of tearing down of Yo-kai Watch in social media, distracting and muddying opportunities for honest discussion of the new franchise. To those so vehemently against giving Yo-kai Watch a try, we ask; Why do you feel this way? Yo-kai Watch is not going to harm Pokemon’s long standing popularity. Pokemon’s fan base is huge, with the original fans still playing the games and supporting the franchise well into adulthood. They will continue to play the games and support Game Freak in the production of new and future games.

Uninformed push back against Yo-kai Watch is unnecessarily resistant for a giant Nintendo franchise that likely is not going away anytime soon. Other long selling games such as the Super Mario Bros, Legend of Zelda, and Animal Crossing franchises have survived the arrival of other games in their genres, Pokemon will continue to succeed in the same way. 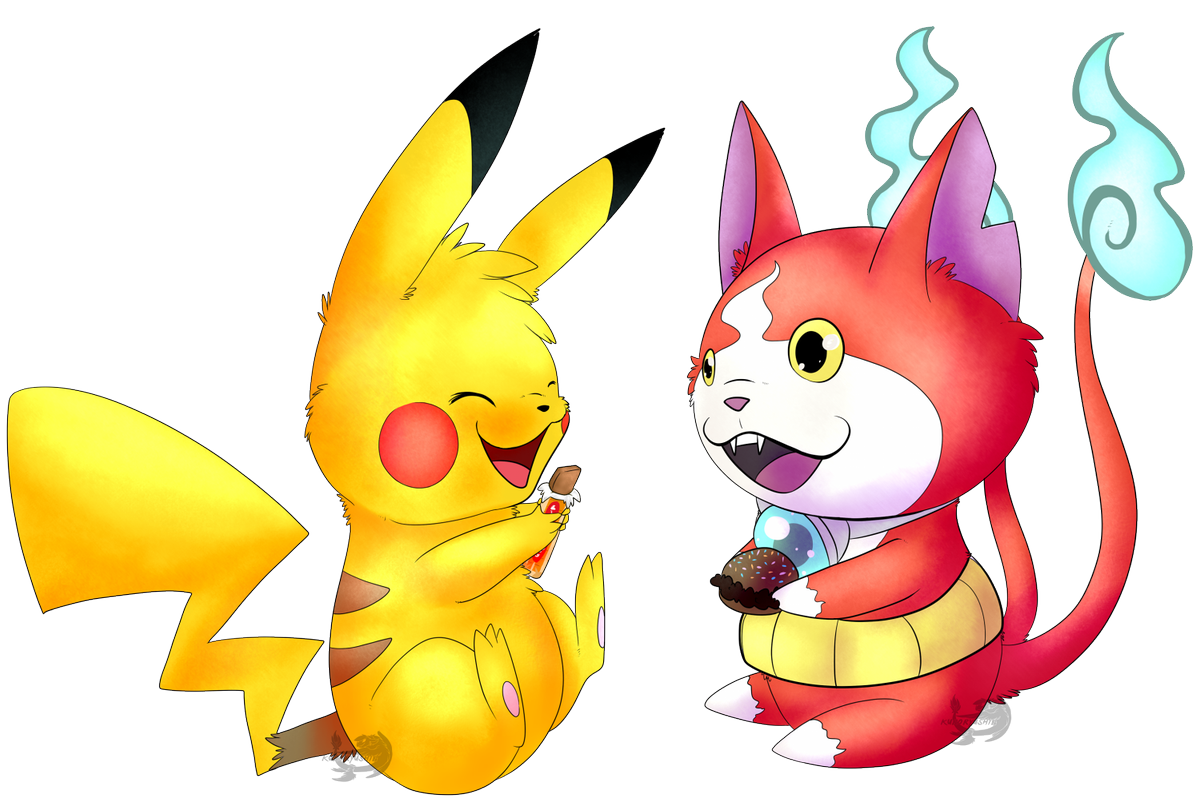 Pikachu and Jibanyan sharing their favorite foods by @Kuroryushin on Twitter.

Variety is the spice of life, and as such Nintendo is happily recommending Yo-kai Watch alongside Pokemon because they believe it is something that an international audience can enjoy with its own unique charm and gameplay. They do not see it as being a threat to Pokemon, otherwise they would have done something about it. Akihiro Hino (CEO of Level-5)  stated that:

“It is different from Pokemon, which you can see when you play it. Yo-Kai Watch isn’t themed as an “adventure” per se, but more as a depiction of day-to-day life. It gained popularity not because children looked up to the game world, but because they related with it.”

Yo-kai Watch offers players the freedom to follow the storyline, devote themselves in collecting Yo-kai, or start their own adventures by completing side-quests. Whatever the player chooses to do when playing, he or she will be greeted with interesting characters and Yo-kai with personality, charm, and a special weirdness that makes the Yo-kai Watch overall so alluring and fun.

Big YouTube gaming names like MunchingOrange and AbdallahSmash026 are already big fans of Yo-kai Watch since playing the first game. Both of them enjoy Yo-kai Watch and Pokemon and have their own video walk-through that you can watch by clicking their respective names above.

There is no reason to discount the game just because it has earned popularity in the same genre as Pokemon. Instead, give it a chance and try out the 3DS demo available on the Nintendo 3DS eShop. If you do not like what the demo offers you will at least experience how greatly if differs from the Pokemon experience and be able to deliver a more informed critique. Many critics who have played through the full game of Yo-kai Watch praise the game’s charm and humor, saying that it is a refreshing treat that stands out from Pokemon.

If fans can learn to dissolve this knee-jerk fear response, the Pokemon and Yo-kai Watch fandoms can both thrive and provide all fans with endless hours of friendly game play and social media interaction. Yo-kai Watch has the ability to give millions a wonderful new experience, but only if people open up to the new while seeing how it can compliment the old. 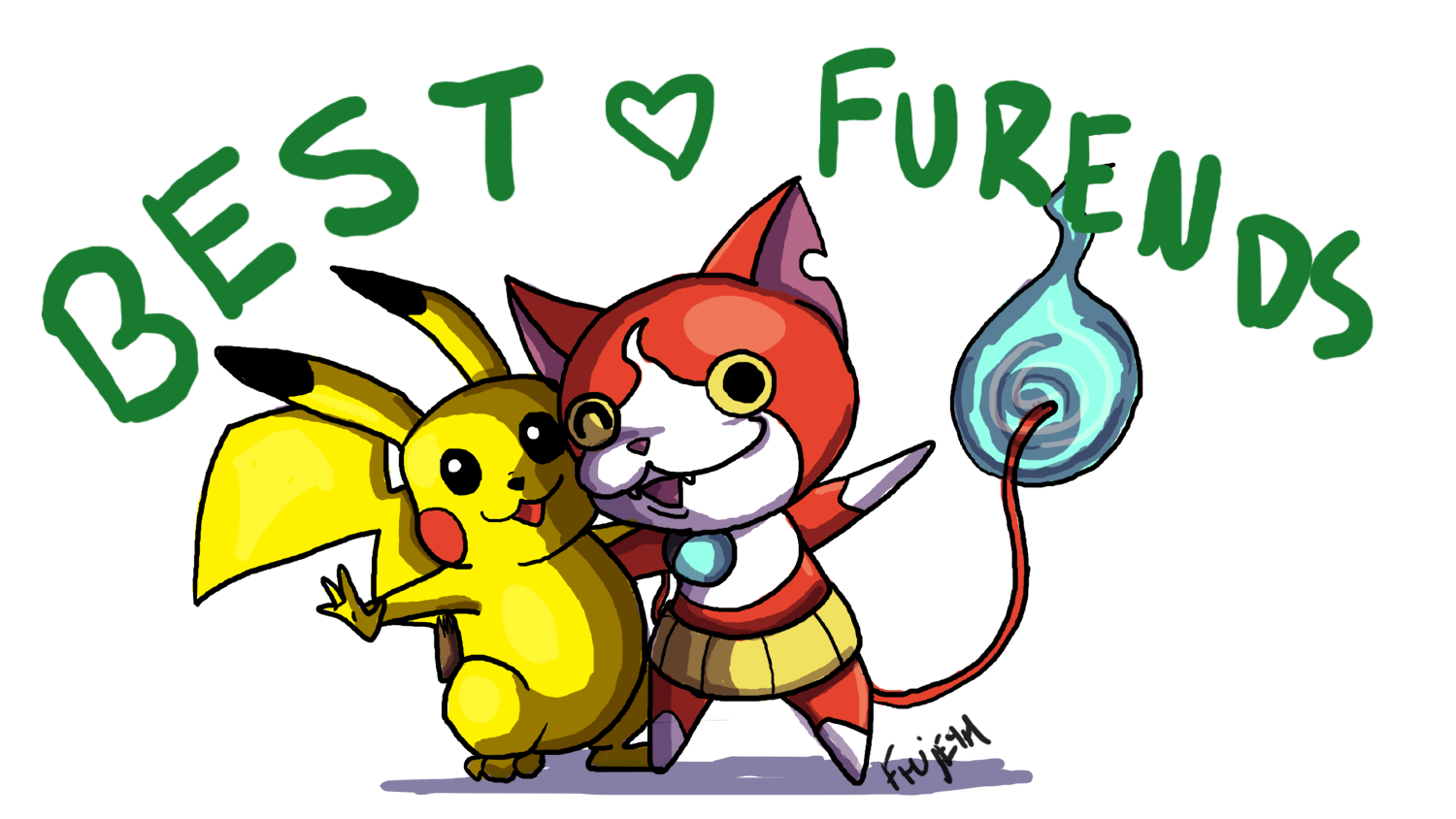 Original art of Jibanyan and Pikachu by Watch of Yo-kai staff member Fhujeth.

Featured image is original art by luluLvl5 on Twitter.

When time came close to the release date of YO-KAI WATCH 2, I was nervous...More

9 Comments on "We Can Love Both Pokemon and Yo-kai Watch!"