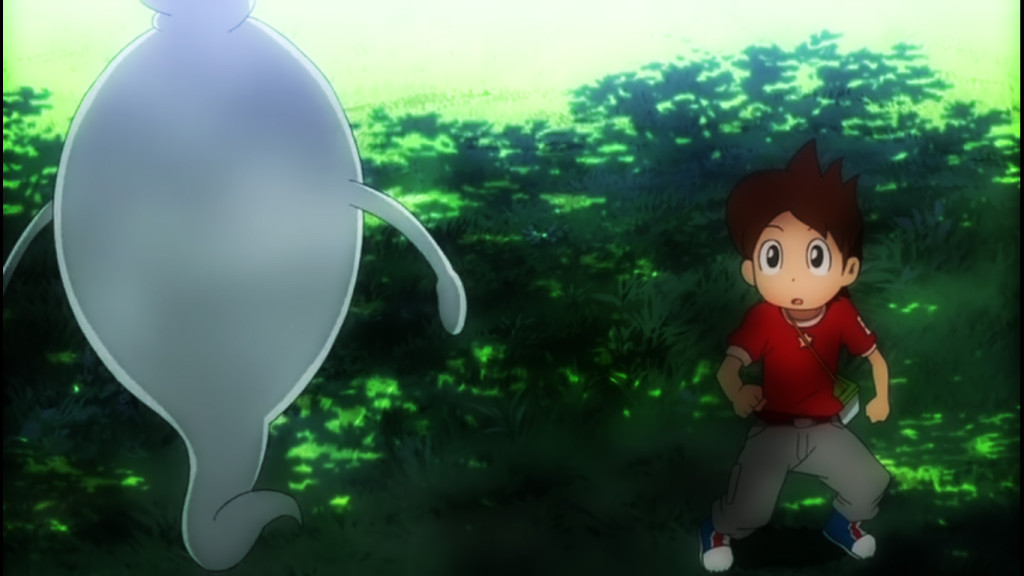 Recently all-but-confirmed for localisation (as Yo-kai Watch), Level-5’s Youkai Watch (which literally means Ghost Watch) is often dubbed ‘Pokémon with ghosts’. However appropriate that dubbing maybe: don’t go expecting an unlicensed iOS Pokéclone with trademark infringing monsters, as Youkai Watch is every bit as good as what you want your new videogame JRPG franchise to be and fortunately with the success of the anime and merchandising looks like it will be.
Upon clicking on the cute ghost icon the anime intro is AMAZING before the awesome Inspector Gadget-esque theme tune kicks in. Choose a male or female character (I love games that give you the choice), choose a name (English characters enabled!) and the story begins with your chosen character and his/her friends talking together, before the game starts proper inside your house (well in true JRPG fashion: your parents house!).
Pick up a fishing net (bug catching apparatus!), receive a few tips (definitely not obtrusive) such as B button dashing (you can only dash in bursts), talk to Mom then leave the house putting your shoes on on the way (an awesome feature!). What is instantly apparent upon walking out into the town is that whilst both the Mother and Pokémon series looked to Dragon Quest for inspiration; Youkai Watch definitely has a kinda EarthBound feel about it.
With map arrows pointing at the necessary direction your quest begins by catching a few bugs with or without your stylus, you’re then directed to a more desolate area where you encounter an old vending machine where you can pick up a grey dusty Pokéball (really!) where your cute ghost friend (Whisper) appears, he gives you a ghost catching device (the Youkai Watch!) and you’re ready to catch ghosts! The first one is close-by. It’s fight time!
It has to be said that the Youkai Watch battle music is AWESOME. Not awesome in that you just enjoy it in-game, awesome in that I find my self humming it throughout the day outside of the game. As for the battle system itself, Youkai Watch feels every bit as fresh as the Chrono Trigger battle system back in 1995. Completely controlled via stylus (don’t ever get any bad Phantom Hourglass ideas) and the rest you’ll find quite self-explanatory.
Renaming your captured monster/ghost (locations of all 250 are found at http://enjoi.sakura.ne.jp/youkai-watch/ji001_050.html) you’ll also find staple RPG elements with shops, save points (you can save at any time – it’s just that the save points restore HP), grinding, bosses and the like. When you build up your team, battles involve rotating a core team of three out of your six main Youkai. And you’ll soon feel at home during battle.
The main question people have asked me regarding this game (other than asking about its potential for localisation) is whether it is better than Pokémon? The answer is that I can’t answer that at present as the Japanese text has hampered my progress (I’m now struggling at 15 hours in) and the score given really reflects the limitations of the immense enjoyment I’ve found from Youkai Watch, although I will update the review upon impending localisation,
One area where Youkai Watch arguably has an advantage is the excellence of the character designs which mostly very much feel like they would be strong choices if inside any Pokémon game. The graphics are cute although hardly push the 3DS to its limits, the cut-scenes are fantastic yet rarely feel obtrusive, the soundtrack is perhaps the greatest on the 3DS, add on a great storyline and a fantastic battle system and Youkai Watch feels like one of the greatest games on the system.
Youkai Watch deservedly placed in my top ten Japanese 3DS games of the year post, I’m sure if given the chance that Yo-kai Watch will place in most of your top ten lists for this year too. With the only obstacles to my enjoyment thus far being textual (and the inability to post screenshots via Miiverse), the Yo-kai Watch localisation is one of my most looked-forward to games of 2014. All I ask is two things: pester @LEVEL5_IA to make this happen and then support the company with your hard-earned GP.