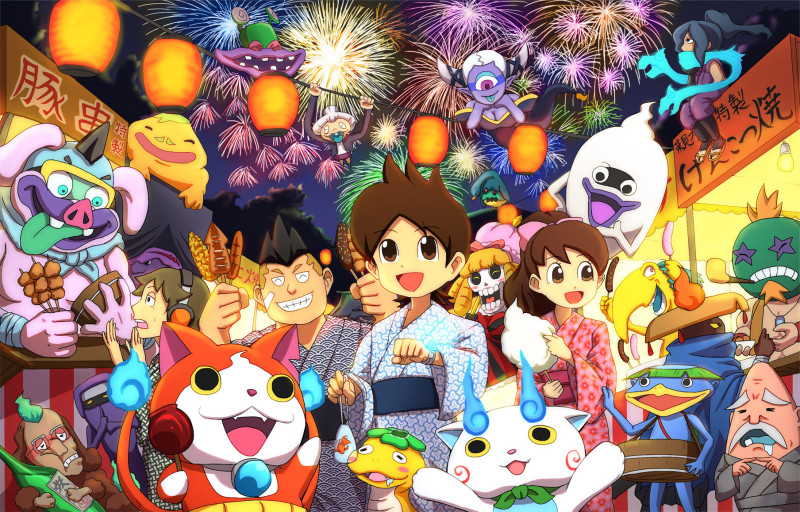 Yo-kai Watch is becoming a huge phenomenon with thousands of fans all over Japan. The franchise started as a video game in 2013 –nowadays there are three more sequels and more in the way- and really jumped to popularity after the release of the TV anime series. Also there are three manga adaptions already published, as well as one of the most box office grossing film of the last years.

We all agreed now that Level-5 knows perfectly how to take full advantage of this success.

The Yo-kai Watch Games and Series have become a mega hit in Japan thanks to a different already known successful ideas combined with modern elements of the Japanese daily life and traditions.

Catch and collect a vast collection of new creatures. Does it sound familiar? Yes. It is one of the greatest formulas to attract many players of different ages around the world.

Then we have the Yo-kai themselves, of course: traditional Japanese creatures and ghosts that every Japanese kid knows and is very aware of their existence. But not only that, the creatures we find at Yo-kai Watch are cute, funny, sometimes annoying, sometimes friendly.

Unlike other stories, the main character –Keita– is not even close to a super hero. He doesn’t have any special power. He doesn’t always do the right thing. So…kids can identify themselves easily with him. And this makes them feel as if they were the real protagonist, as if they only need the Yo-kai Watch to be like Keita.

And what will happen when it goes overseas?

The Yo-kai Watch phenomenon is supposed to arrive to Europe and North America soon, very soon. The formula for the success looks perfect, but the main obstacle that the creators can find might be the strong Japanese background of the story itself.

But even if a western kid doesn’t know the cultural relevance of a Yo-kai, he really may enjoy the story, as it is one of the funniest and most entertaining of the last years. And isn’t that what all kids want?

Only time will tell.

No Comments on "Overwhelming triumph of Yo-kai Watch in Japan"