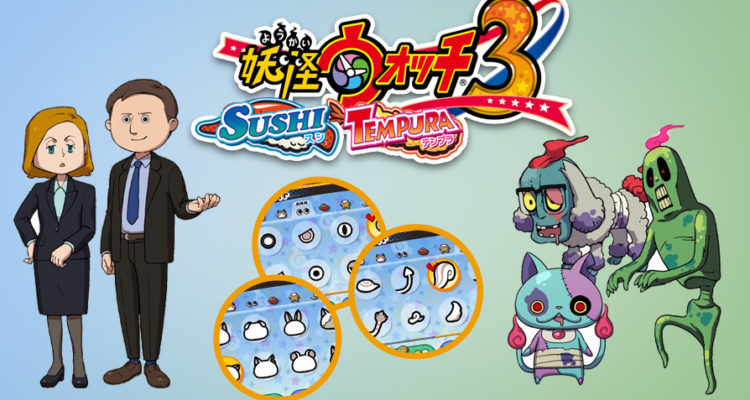 Today we have more news for you about Yokai Watch 3 (Sushi/Tempura) the newest game in the Level-5 Yo-kai Watch series of games, set to release July 16th, 2016! 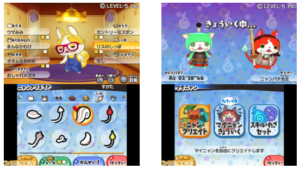 Perhaps the biggest news is the recent reveal of the super exciting マイニャン (My Nyan) yo-kai cat creation feature! In Yokai Watch 3 you’ll be able to create your own original cat yo-kai, controlling nearly every aspect of their look and even use them in battle! You can choose their look, voice, tribe, and even skill set! Select from a variety of appearance options including fur color, eye shape, tail style, ear style, clothing and accessories, and more! 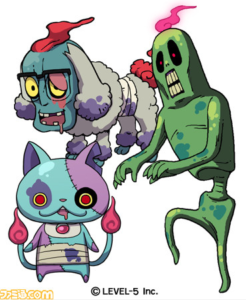 Presumably taking the place of “Terror Time” (鬼時間) is a new event, “Zombie Night”! If you can escape the zombies and survive the whole night until the toll of dawn, then you’ll reap some great rewards. We can look forward to this fresh new play mode to explore. It won’t all just be running away, however… the brave among us can fight off some zombies with a special Hammer weapon. 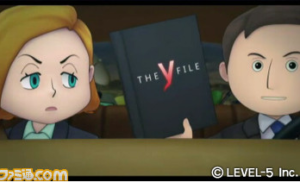 Two new characters on the scene in Yokai Watch 3, Kacully and her partner Mulder, clearly they are Scully and Mulder from the American TV Show and franchise, The X-files. Their names are likely puns on the words 角 (かく) and 丸 (まる) (angled versus round). While Kacully is an intellectual realist, Mulder is a bit of a talkative theorist. This famous team of FBY agents has arrived to investigate Mysteries happening in the US.

If you own both versions of Yokai Watch 3 (Sushi and Tempura) you can link them to unlock the special area 妖楽 (Yo-raku) which will allow you access to special items and an exclusive gasha machine / Crank-a-kai (much the way Yo-kai Watch Buster’s players have access to the VIP room when they link both versions). You can also link up two versions of the game among your friends and family if you do not have both yourself!