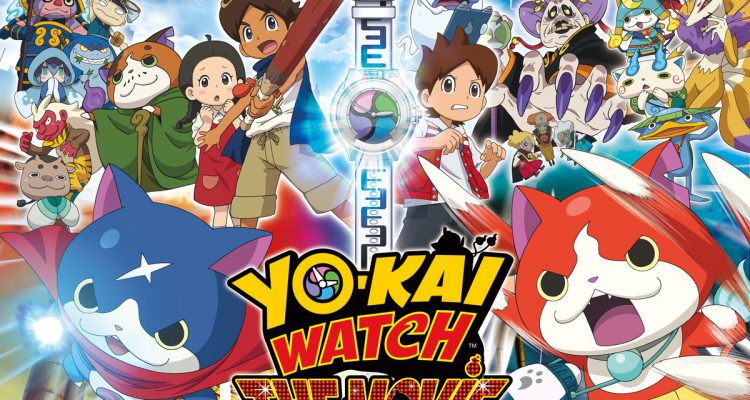 It’s finally time! The first YO-KAI WATCH movie is now coming to U.S. cinemas officially tweeted by the official YW account! On Saturday October 15, the first movie will premiere in select theatres, giving away exclusive Hovernyan medals to people who attend to watch the movie. No information about tickets is available on the Fathom Events page, but on Fandango, you can buy tickets and look for available movie locations. Full information can be found below:

Ticketing: .
**Tickets are on sale now according to the official YW account in select theatres **
Sign up HERE. Follow us on social media or text TV/RADIO to FATHOM (328466) for event updates.

LEVEL-5, Fathom Events, and Eleven Arts are excited to bring YO-KAI WATCH: THE MOVIE EVENT to cinemas nationwide on Saturday, October 15 for a special one-day event!

YO-KAI WATCH is the popular animated TV series which began airing on Disney XD and streaming on Netflix last year. Riding a wave of critical and commercial success, Season 2 began airing this summer in a premiere time slot. Fan support has been so vocal, that LEVEL-5 couldn’t wait any longer to bring the first movie to the US. In its initial release in Japan, the movie was so popular that it set a box office records for advance ticket sales, and was the highest-grossing Japanese film in Japan in 2015!

In YO-KAI WATCH: THE MOVIE EVENT, Jibanyan, Whisper, and Nate meet a heroic Yo-kai named Hovernyan, and must travel back in time to team up with Nate’s adolescent grandfather to stop an evil Yo-kai from taking over the world! Can they discover the secret origin of the Yo-kai Watch and save humanity before time runs out!?

Attendees of this event will receive an exclusive Yo-kai Medal* for the hero of the movie, Hovernyan! This medal will only be available to those attending the screenings. This exclusive Hovernyan medal will work with Hasbro’s new Yo-kai Watch Model Zero toy AND you can scan the QR code on the back of the medal into the YO-KAI WATCH 2 video games for Nintendo 3DS to unlock a special reward!

This is an action-packed event you don’t want to miss! Team up with your friends, get your tickets now and go to your local movie theatre!

A teaser for the movie has also been uploaded as well:

What are your thoughts? Do you plan on going to the YW Movie Event? Let me know!