This week, there were big updates for Wibble Wobble have been added in the game: a new area called Infinite Inferno as well as a new Wib Wob Me mode. I will go over the Infinite Inferno first.

The Infinite Inferno has 8 circles, meaning it has 8 sets of stages total. Right now, only the 1st and 2nd Circle sets have been added in the game. In these two circles, each circle features a boss, a stronger version of Slimamander (Eyedra) and a stronger version of Sproink (Hoggles) appear. Beating these bosses on your first try will lend you a Soul Secrets to power your Yo-kai’s Soultimates.

Beware, the Yo-kai that appear in the Infinite Inferno are very tough to beat, so you will need high level Yo-kai to help aid you in beating the stages. Later down the line, there will be more circles added in the game that lead to the 8th circle and lead to the boss Wibblewok. To unlock the Infinite Inferno, you need to beat the Hooligan Road in Wibble Wobble. Good luck on beating these stages!

The Wib Wob Me Event allows you to get a new Yo-kai called Mimikin that you can get when you login and check your inbox. Befriending Mimikin will unlock the new Wib Wob feature that can be seen in the menu. 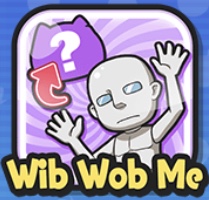 With the Wib Wob Me mode, you can create your own Wib Wob by taking pictures of yourself, friends, others for Mimikin to mimic. This will become a permanent addition in your game once the Mimikin event is over on 9/29/16. In addition, you can grab yourself an A-Rank version of Mimikin through the Crankakai from 9/13/16 to 9/29/16, so be sure grind money everyday while you can.

*Wib Wob Me may be unsupported on some devices.

*If your device’s camera is disabled, this feature will become unavailable.

*Your Wib Wob Me creations will be deleted if you delete the Wibble Wobble app itself.

*Suspending and then resuming the app while taking a picture during the new “Wib Wob Me” function may force the app to close.

*Users with iOS 8.1 may experience screen blackouts when taking pictures with the new “Wib Wob Me” function.

Share your tips with the Infinite Inferno here! Let me know what you think about the event!