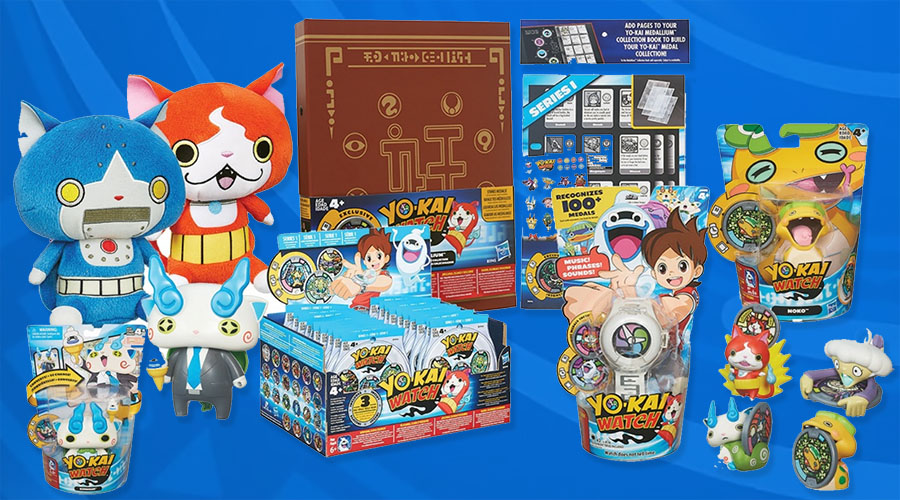 Due to popular demand of the Yo-Kai Watch Series 1 Toy Line, its release has been moved from January 1st, 2016 to December 28th, 2015! This might not seem like a huge amount of time, but for a waiting fan, especially a young one near Christmas with a gift card in tow, those few days can mean the difference between picking up a Star Wars figure or their very own MEDALLIUM and YOKAI WATCH!

Although the first series of toys being released right now is very small, it will still allow children too young for the game to enjoy the fun of their new favourite series in different ways. The medals allow children and adults to collect and see pictures of their favourite Yo-Kai as well as hear their voice and tribe song through the Yo-Kai Watch. The medals can be stored in the Medallium, just like Nathan does in the game and TV show! Medals also have a QR code on the back that when taken to Piggleston Bank in the game, can award the player with rare Crank-a-Kai coins and other objects that have the potential to award rare, S-Rank Yo-Kai.

There are also some figurines coming out that show the character and lets them hold onto their medal in a neat way. Other products have been announced, including plush and more, but it is still unknown when they will be released.

Series 2 of the medals as well as more toys will be released in Spring of 2016!

New YO-MOTION medal merchandise has been officially revealed by Hasbro. While they do showcase the...More

2 Comments on "Merchandise Release Date Changed! Toys are coming out on December 28th, 2015!"