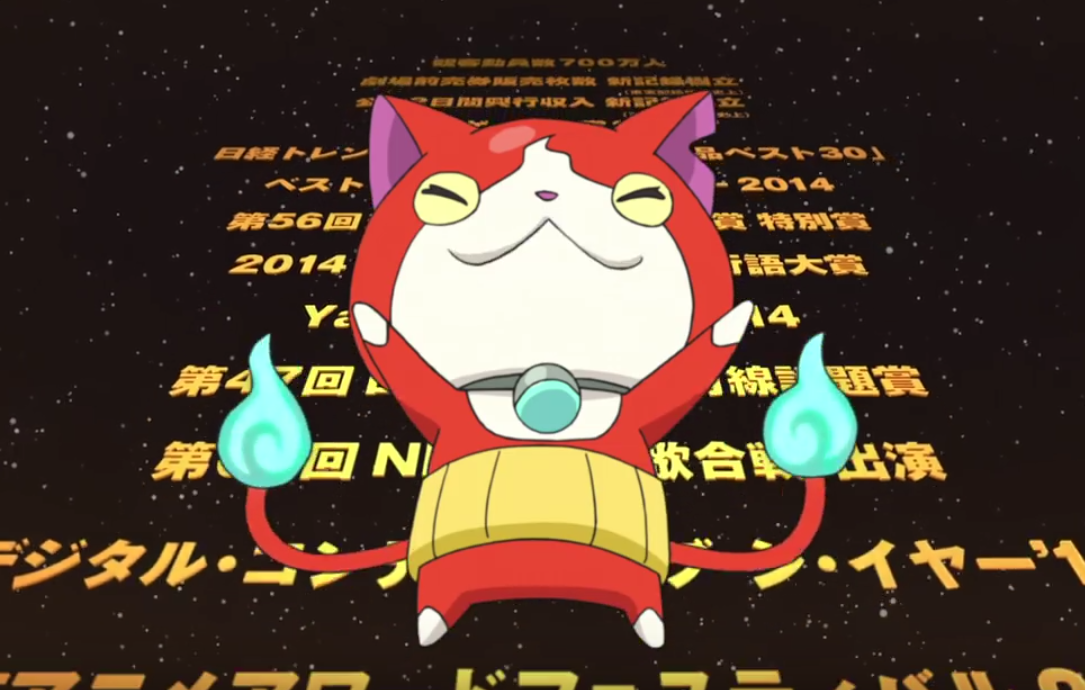 If you were asked “Which movie sold the most tickets at the end of last month?” Star Wars: The Force Awakens would probably right answer, breaking several records during the final two weeks of 2015. Except… in Japan!

The number one movie in Japan at the end of December was “Yo-Kai Watch the Movie 2: King Enma and the 5 Stories, Nyan!” 「映画 妖怪ウォッチ エンマ大王と5つの物語だニャン！」 selling 975,000 tickets during its opening weekend. “Star Wars: The Force Awakens” 「スター・ウォーズ／フォースの覚醒」 came in second with 800,000 tickets sold.

But it didn’t stop there, the Yo-kai Watch movie kept its attendance lead into a second weekend (Dec. 26-27) with a recorded 450,000 tickets sold ($4.1 million earned) bringing the movie’s total admissions to 2.15 million tickets sold ($19 million earned). Star Wars was yet again in 2nd place with 440,000 tickets ($5.8 million earned). According to box office rankings in Japan, total admissions are considered above total earnings, with Yo-kai Watch pulling in more movie goers across two weekends.

There’s no need for any bad blood, however; The team behind Yo-kai Watch clearly are big Star Wars fans themselves, leading to many funny illusions to the Star Wars franchise in its series of games. Beginning with Yo-kai Watch 2 for the Nintendo 3DS (which released a year ago, last holiday season), when players meet an elderly, robed cat yo-kai named “Master Nyada” who insists our heroes “Use the Hose!” (a pun that operates on the fact that “hose” 「ホース」 and “force” 「フォース」 sound far more similar in Japanese than they do in English).

As a direct nod to “The Force Awakens” 「フォースの覚醒」 many illusions to the Star Wars franchise were included in the recent Yo-kai Watch Busters “Getto-gumi” DLC update. Including a powered up version of USApyon’s “Vadar Mode” and an “Awakened” version of the Hinoshin Big Boss, called  “Awakened Hinoshin”「覚醒日ノ神」 who employs light saber weilding minions during battle. In fact, many fans of American 80’s films in general may be delighted by all of the Ghostbusters, Star Wars, and other nods in Yo-kai Watch Busters.

In this week’s Media Create Sales, we finally have good news to share! After a...More

Yo-kai Watch Festival is back at USJ!

After its initial summoning to the Kansai region last summer, Yo-kai Watch Festival is coming...More

Haters say “Hey YO no!” Level-5 go cracka-lacka-boom-boom! We have some super interesting ~ Yo-kai...More

Nowadays, Yo-kai Watch heads the list of the most successful anime series in Japan. This...More

No Comments on "May the Force be with Yo-kai Watch"