Last month’s issue of the popular Japanese magazine CoroCoro gave us the confirmation of the upcoming game developments for Youkai Watch which was just a teaser before Level-5’s Vision 2015 – The Beginning conference took place.
This months issue of CoroCoro gives us more scoop of whats coming next for Youkai Watch. The first season of the hit popular show will be airing its season finale on April 17, 2015. Check out Yokai Watch season 2 trailer of the hit tv series. 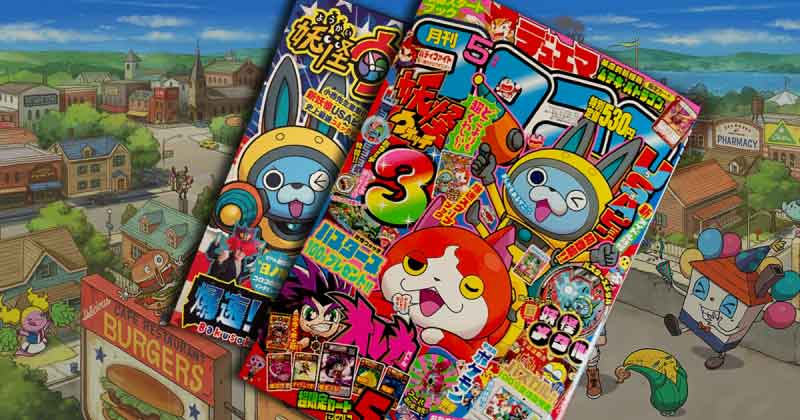 A special thanks to @natsukigirl for sharing her scanned copies of the latest issue of CoroCoro magazine. Be sure to check out her  blog bukimi.tumblr.com with more info on CoroCoro Magazine.

The following images are from May issue of Japanese Magazine CoroCoro.

Japanese Magazine showcases the new yokai catch watch called Yokai Watch U and it will require a new set of medals and will reveal new yokai.

Yokai Watch U will be compatible with B Medals and it will contain a slot for SD card which can mean the transfer of files between Nintendo 3Ds and the watch. The watch is scheduled to be released in August in Japan.

The following tweet is from @ZAWORLDO, you may know his voice from the Youkai Watch toy and Medal review videos.

The magazine shares other information regarding the new characters in the show and new yokai that will appear on the new season and the upcoming game. Check out the gallery below for the scanned copies of May Issue of CoroCoro featuring Yokai Watch   [intense_gallery type=”galleria” rtl=”0″ layout=”square” marginpercent=”1″ include=”797,796,801,806,802,804,800,799,798″]