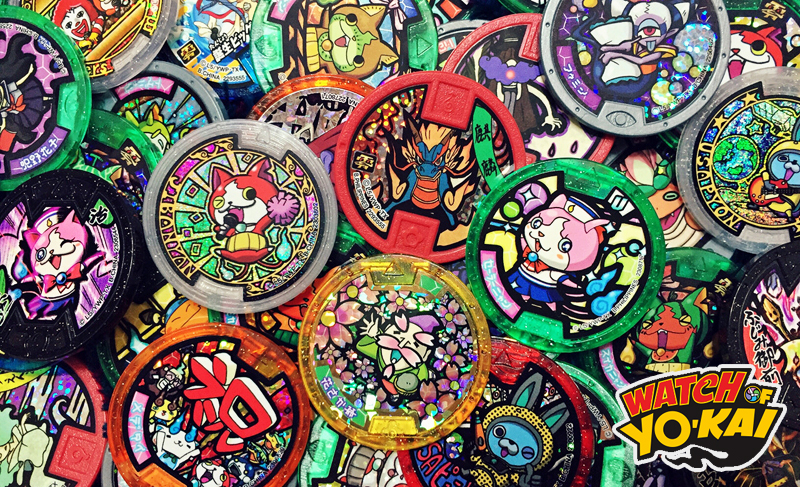 Undoubtedly the biggest craze within the Yokai Watch fandom, in Japan and highly anticipated in North America, are… did you guess it already? Yo-kai Medals! Yo-kai Medals are brilliant; a perfect intersection of imaginative play, collecting, and functionality across all the current games in the franchise. There’s so much to see and do with such a deceptively simple looking toy!

Fans of all ages will find a variety of ways to use and appreciate yo-kai medals. Cosplayers and kids can use the medals they collect along with the yo-kai watch toys to make believe they are summoning their favorite yo-kai and really look the part. Perhaps other kids and adults might enjoy trading and collecting all the medals and trying to find rare ones.

Eventually, once you’re surrounded by a pile of all of these colorful and sparkly medals, you’ll want to set to work scanning all those unique QR codes into your games to get special coins and items that might even help unlock super rare yo-kai!

Important things you need to know

Probably the single most important thing to know is that every Yo-kai Medal QR code is unique even if the medals look the same. You can use every QR code once per game save file. This also means you can use and trade them and share codes with your friends without worrying you’ll lose your chance!

Of course all the medals have great artwork of your fave yo-kai, but some are a little more rare and feature holographic artwork.

In Japan there are already lots of different medals series with different art, frame types, and colors, they all have different compatibility with various games and toys. There is a veritable rainbow of hundreds of medals to collect! It can get kind of overwhelming to keep track of them all, so here is handy graphic you can check back to later for reference (don’t forget to bookmark this page!). 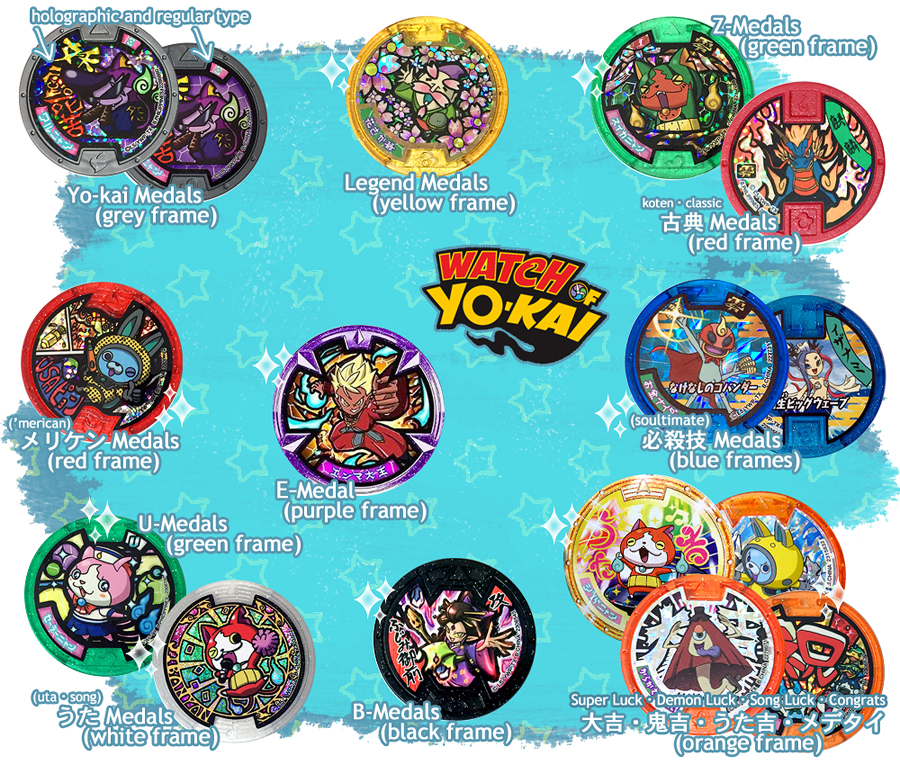 Now let’s break it down!

As you can see above there are lots of different types of medals. First, there are five series of of “grey frame” medals, along with capsule machine and other product and promotional exclusive medals that come along with other Yo-kai Watch toys, books, manga, and cross promotional goods! We aren’t sure yet how these will be distributed outside of Japan, but rest assured we will always keep you posted!

The ultra rare “Legend Medals” have semi-translucent, sparkly yellow frames. The easiest Legend Medal to find right now is the one pictured above, 花さか爺 (Hanasaka-jii, or Elder Bloom in the English version)… However, all the rest are so rare that even some of the biggest fans can’t get hold of them easily. CoroCoro Comics more recently even produced an extremely limited run of “crystal frame” Legend Medals that are even more rare!

Along with the Japan release of the “Yokai Watch 2” 3DS games, three series of “Z-medals” with sparkly green frames were released (and yet again, lots of capsule, product, and promo exclusives~!). The kanji 零 (for 零式 pronounced zeroshiki, “type zero”) is featured in the upper right edge of these medals . Next up, around that same time, two series of 古典 “Classic Medals” (Classics feature the original “old school” yo-kai) with red frames in a new style! Those series contain medals that help unlock coins and items for the sequel games in Yo-kai Watch 2 (Honke, Ganso, and Shinuchi) and function with the “Zero Shiki” (type zero) Watch.

But wait! There’s more *huff huff* … there are also sparkly blue framed medals called 必殺技 “Soultimate” Medals and their artwork show off our favorite yokai using their Soultimate attacks! So cool! Oh geez… let’s not forget the 大吉 “Super Lucky” Medals with sparkly orange frames… wow these are really really rare and were only available through capsule machines in Japan or very special promos.

More recently are three series of “B-medals” which have sparkly black frames in yet another new style that help you unlock items in the Yo-kai Watch Buster’s spin off series of 3DS games. The artwork on the “B-Medals” is also marked by the kanji 攻 in the upper right. Followed most recently by the “U-Medals” which bring back the green frame type but featuring the letter U in the upper right. Keep your eyes sharp so you know which is which!

Coming up in the very near future are うた吉 “Song Luck” medals, “‘Merican Medals” that have really cool “American Comics” style artwork. Also really soon is a special promo medal featuring King Enma, it has a sparkly purple frame and is being called an E-Medal.

Wow… that’s it? We’re really done covering them all? Until the next series anyway! Please keep an eye on the Yokai Watch Wiki as we will be adding a lot more info on all of these medals in the coming week.

3 Comments on "Get Ready for Yo-kai Medals!"