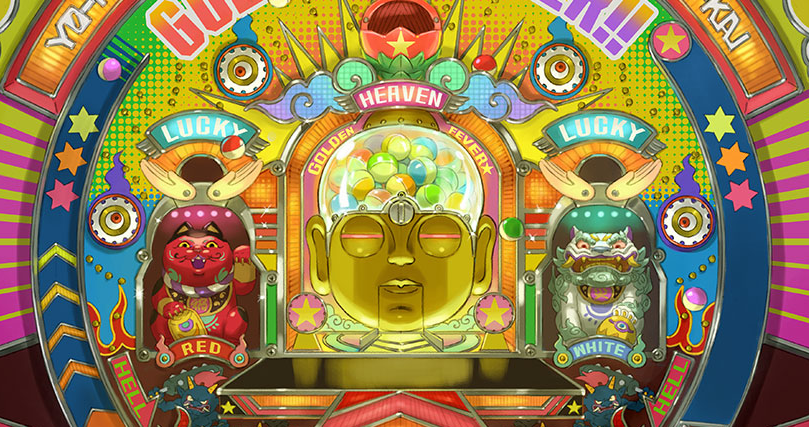 We’ve been playing the new Getto-gumi missions all weekend and we’re still not done! There is so much new for Yo-kai Watch Busters fans… so let’s dive right in!

At the top of the list of things you wanted to know about this update happens also be ~spoiler~ heavy territory. So what can we say about all these new missions and chapters? Well, for the sake of our North American friends we’ll try to avoid as many story spoilers as possible.

The new mission roster is actually a mixed bag in terms of difficulty: At the outset you’ll be immediately dropped into some pretty gnarly double boss battles, where you’ll be asked to take on two strong bosses at the same time. Some missions also require you to face off with a few “超” (Chou – Very Strong) level bosses in a row. There’s really no easing in here, you get tossed right into the “Busters War” fray. These missions will really test how well you’ve leveled and equipped your core team and lead yo-kai.

Many of the optional sub-missions involve the mechanic of asking you to play as a different team of yo-kai, rather than the core team you’ve trained with and cultivated. These missions are both extremely fun but also quite challenging as you no longer have your level 99 team to fall back on if the going gets rough. These missions will test how skilled your own personal playing style has become and how resourceful you can be in a pinch.

Many of the brand new Big Bosses turned out to be easier than anticipated, namely Captain Thunder, Robonyan 3000, and Nurarihyon. Even the initial confrontation with Nurarihyon’s Daiyouma mode seemed easier than previous bosses in the story line. Admittedly we haven’t faced off with Bushioh or Kakusei Hinoshin yet. As usual, online play is definitely helpful for many of these bosses if you’re struggling.

Finally, new challange mission modes have been added! “Time Attack” and “Onidama Atsume” (Collecting Onidama). In Time Attack you’ll be pitted against a selection of Big Bosses which you’ll want to beat as quickly as possible. In Onidama Atsume mode the mood is a little more light hearted and the general idea is to chase a selection of big bosses around a map trying to collect up as many Onidama as possible before time runs out! 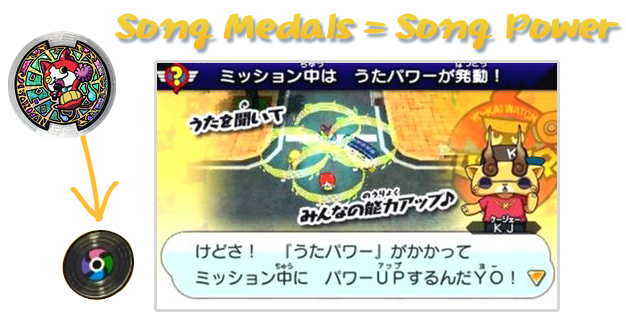 Probably the coolest new feature are the integration of “Uta Medals” (Song Medals) which can now be played before each mission for a special “Song Power” status boost! You’ll unlock songs using the QR Codes from Uta Medals and then request a song with DJ KJ on 3F. You’ll get to use one song power-up per mission, and it applies to your whole team. In online battles the power-up will also apply to anyone who enters your team automatically, even if members are entering and leaving the room.

When the mission starts the song will play and it gives the game a very cool retro feeling. Being able to set a song and hearing the opening jingle also adds a little tiny personal touch to each mission or online coop. You’ll want to look carefully at your online team before selecting a song. If you pick a song that goes along with one of the yo-kai on the team, that player will get an EXTRA boost from the song selection.

So for example, if there are two Bushinyan (Shogunyan) members on your team, play the Bushinyan medal song for a huge power boost to those players! Oh! And don’t worry, if you gained an Aura from a previous Boss Battle, that power boost will still be in effect even if you use a Song Power, you can stack your Aura and Song Powers! 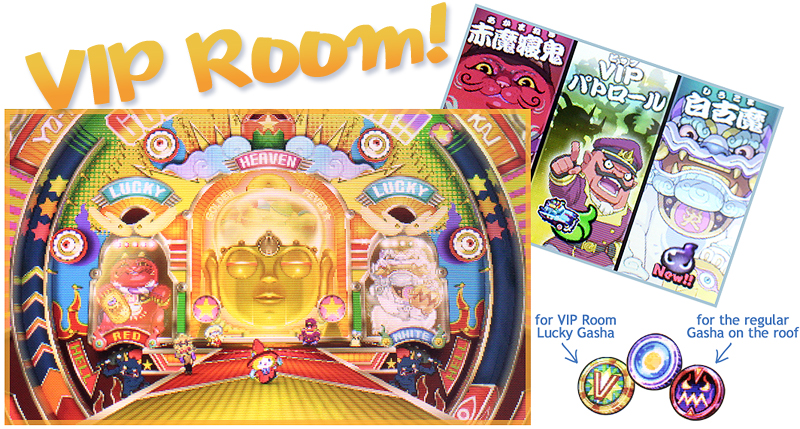 The VIP room is dazzling to behold, and oh. so. useful. You’ll need to own both versions of the game to unlock!

Mozuku-Sensei will have a daily selection of useful items or coins available, so use this opportunity to stock up on things if you’re running low on your favorites. Once per day you’ll be able to get a special VIP Coin from Zashiki-warashin to play the “Golden Fever” Lucky Gasha.

Also once per day is the opportunity to enter a shortened 10 minute VIP Patrol. You’ll want to use your time very wisely as this is no ordinary mission. This mission is always on the 平釜平原 (Hiragama Plains) Area, and will always be filled with only RARE and S-RANK Yokai. Some are the usual rares you have seen before on other maps… but some gasha only yo-kai are finally out and about, with the elusive Fruit Nyans especially, making the opportunity really worthwhile!

In addition to all of this there are some new coin types also coming our way; Mangetsu Coins (the password for the first one has been released via CoroCoro Comics) and Tsuwamono Coins (available from certain medal QR codes, such as the new legend medal for yo-kai Edison)! These new coins will help you out as you try to collect all the new yo-kai!

Players who love to play coop online will be glad to hear they have finally heard and founds solutions to some of our main complaints. A big problem with the previous coop options were the severely limited chat phrases and desired group settings. Now you can limit your team to rank 15 and above, as well as add a note to your group about what type of players you want to team up with and what you want to accomplish during the missions!

They have also added an additional chat menu for teammates to call out names of Big Bosses they want to fight. There’s a lot less guessing now with all these added group and chatting options. Hey, they’ve even added a new chat button for those of us who need to rush off and use the bathroom in between missions. I’m not kidding!

So if you haven’t already, get on over to the eshop and update Yo-kai Watch Busters! It’s quick and it’s free, and there’s so much new to see and do! Happy Holidays my Yo-kai friends!

No Comments on "Get into Getto-gumi! – Yo-kai Watch Busters"