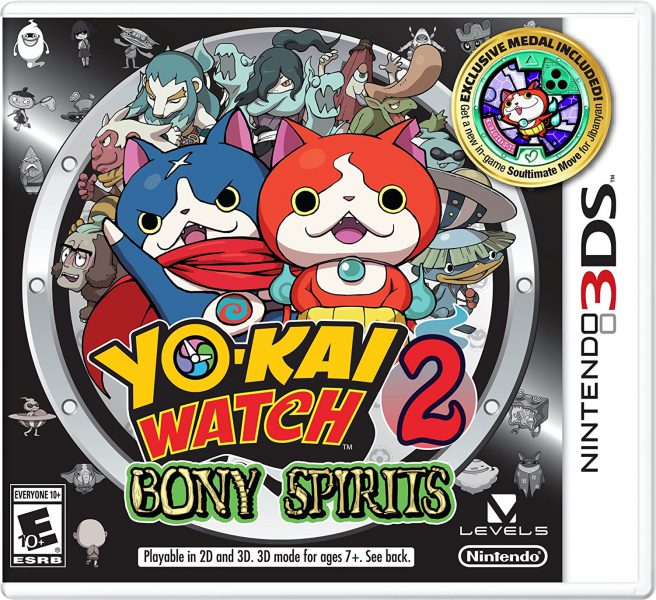 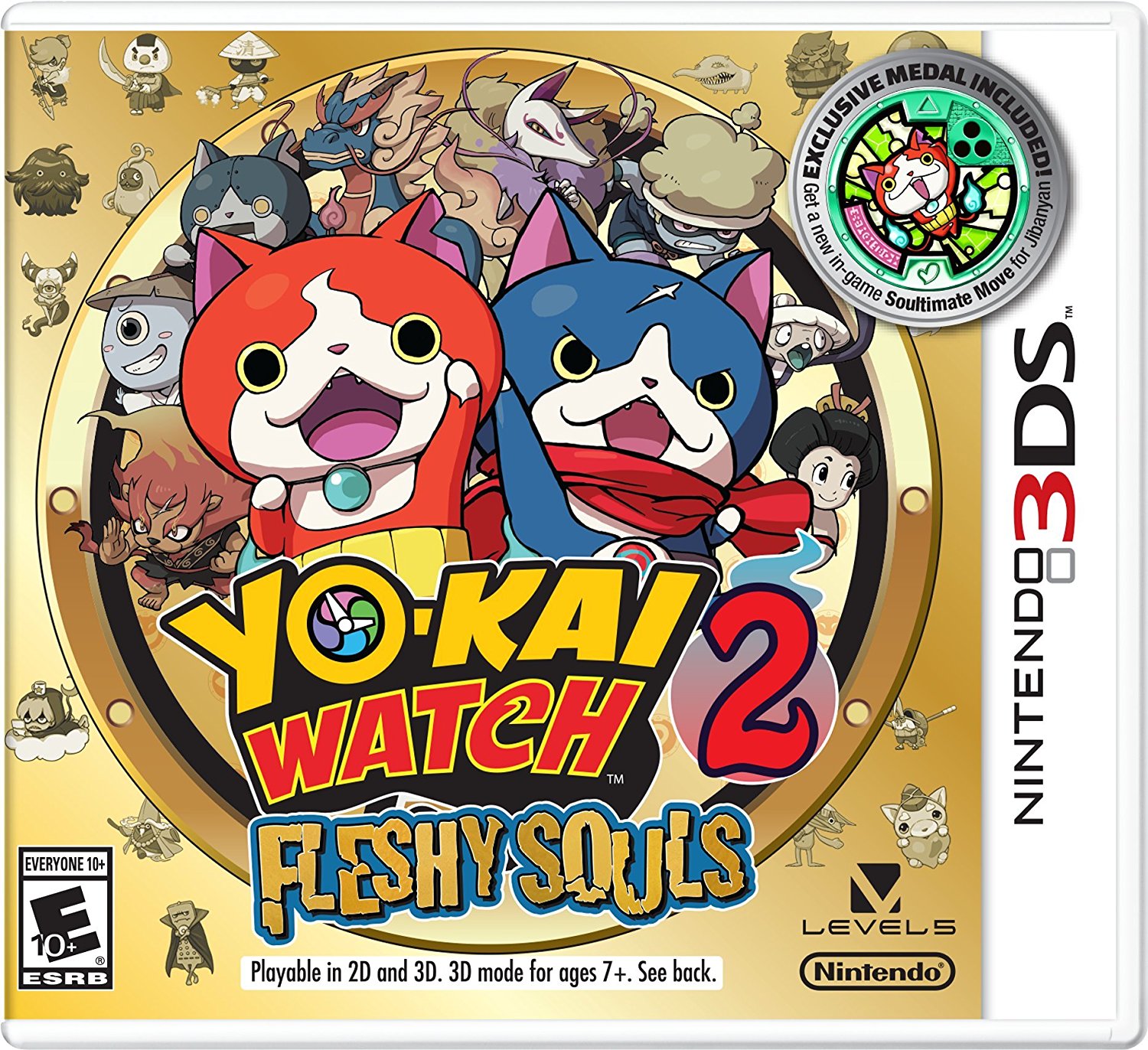 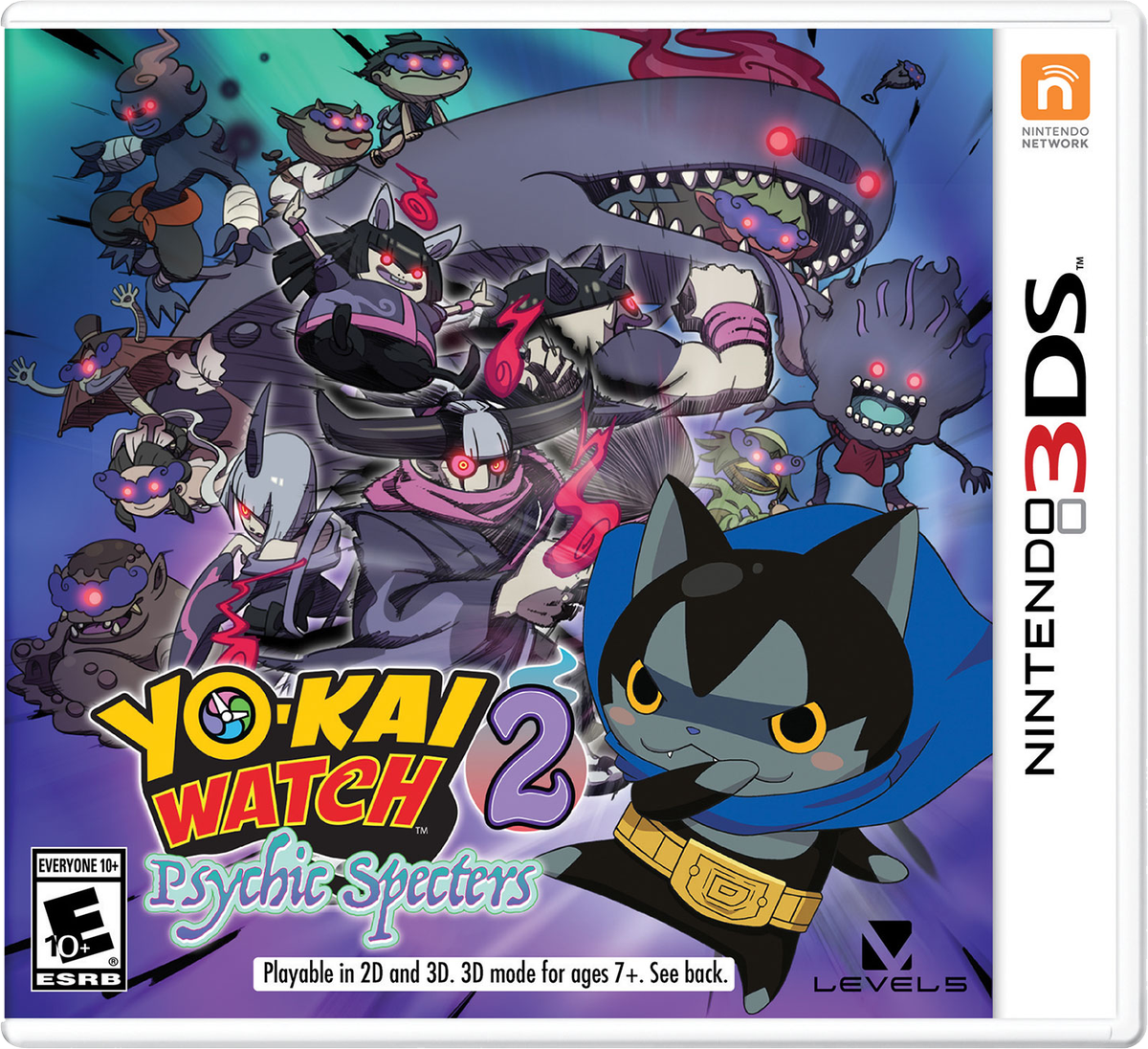 Yo-kai Watch 2 (妖怪ウォッチ２) for the Nintendo 3DS is a JRPG game that was developed by Level-5 and released in Japan on July 10th, 2014 (exactly one year after the first game’s release). The game has and is also being localized into other languages, including English, French, Spanish, and Korean. The North American version is set to release sometime in September, 2016.

Unlike the first game, Yo-kai Watch 2 originally released (July 10th, 2014) in two versions (with a third releasing later), beginning with the 本家 (Honke) and 元祖 (Ganso) … in Japanese both of these words are slight variations of meaning on the concept of being the “Founder” or “Originator” of something which is the over arching theme across the game’s plot. So, already you can sense that this story is about a feud of sorts. In North America these first two versions of the second game will be named “Fleshy Souls” and “Bony Spirits” respectively and will contain the same game play, but with some exclusive yokai available only in each version.

A third version of Yo-kai Watch 2 was also released in Japan called 真打 (Shinuchi) which means “Headliner” or “Top Performer” was released a few months later, on December 13th, 2014. Which doesn’t exactly follow the Founder/Originator naming theme, but is a great fit, being that Shinuchi arrived later than the first two, but contained more content than the first two versions of the game!

The game’s plot begins similarly to the first game, by following the daily life of a young boy named Nathan Adams (天野 ケータ / Keita Amano), also referred to as just Nate, on his summer break, as he rediscovers the existence of ghostly spirits and specters known as yo-kai for a second time after temporarily having lost his memory of them (caused by some of the main villains in the story). He encounters a mysterious shop where he become reacquainted with Whisper and the Yo-kai Watch. The player can also choose to play as Katie Forester (木霊 文花 / Fumika Kodama, also called フミちゃん / Fumi-chan) instead if they wish.

After being having memory restored our new adventure can begin. This summer, Nate (or Katie) travels to a new town to visit his grandmother, but ends up encountering a new yokai and being transported back in time where he meets his grandfather, Nathaniel (ケイゾウ / Keizou), at a younger age. If the player is playing as Katie, then she meets her grandfather Kenny (フミアキ / Fumiaki) who fills the same role in the story.

The player will use multiple yo-kai watches (the original watch as well as the new Type Zero watch that contain new features that make gameplay more dynamic), warp and time travel mirrors, and a real working train system throughout the game to get from place to place and complete missions. Time traveling will also help the player encounter “classic” yokai that more closely resemble the original yokai from real Japanese legends, folktales, and myths.

Nate and his grandfather need to discover and overcome the mystery of the “kaima” that are possessing both people and good yokai alike, causing them to act bizarrely and carry out evil deeds.

Just as in the first game, in Yo-kai Watch 2 there are several ways to...More

JohneAwesome shows a easy and fast way to get EXP in Yo-Kai Watch 2: Bony Spirits...More

Yo-Kai Watch 2 – How To Get Robogramps With QR Code!

Yo-Kai Watch 2 – How To Get Robomutt With QR Code!