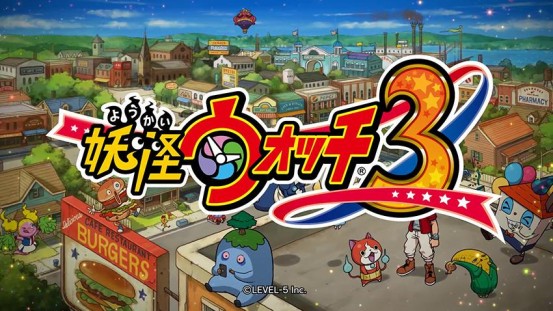 The hour and a half event showcased Level-5’s upcoming games but the main highlight of the event was the segments on their popular franchise Youkai Watch.

Youkai Watch 3 was first announced on this months issue of CoroCoro magazine but today we have more details on the game and a trailer. The game will take place in USA which kinda of gives us a hint that it will be the first game to be released in USA.

Youkai Watch 3 will feature a new character named Inaho who also has an youkai watch of her own. She will be replacing the popular female character of the game and tv show, Fumika.

The new game will also feature new youkai such as USA Pyon who is featured on the trailer.

There has not been any release date set for Youkai Watch 3 yet. It will be released for Nintendo 3Ds. More details will be shared on the next issue of CoroCoro Magazine.

Youkai Watch Busters was featured in Youkai Watch 2 as a mini game. Level-5 has developed a stand alone version of the mini game and the game will come in two versions, Akanekodan and Shiroinutai.

Youkai Watch Puni Puni was revealed on today’s event and is set to be released in both iOS and Android. It is a puzzle game based on Youkai Watch. The gameplay was shown during the event, more information will be revealed later on.

Stay tuned to Watch Of Youkai for more updates on the release of Youkai Watch in the west.

Nintendo of Europe has just announced today in a press release that YO-KAI WATCH 2...More