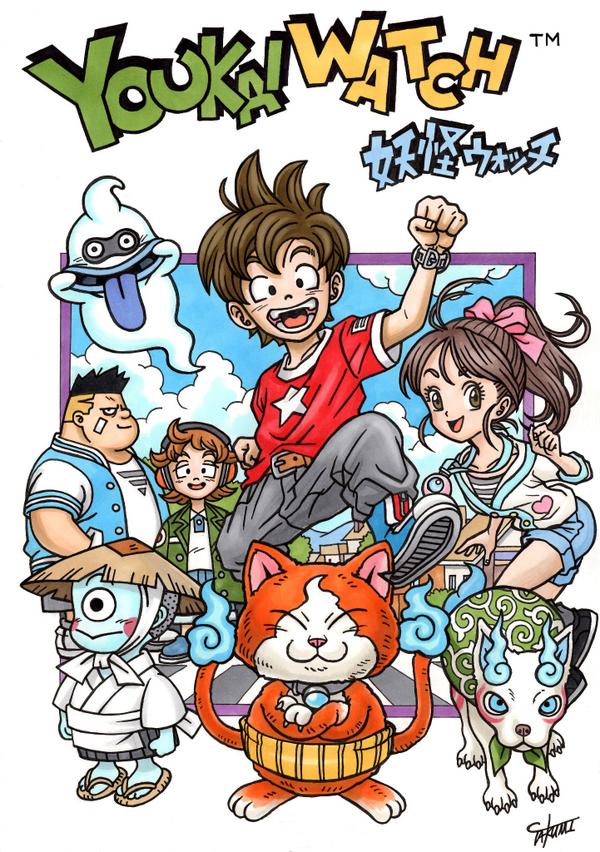 Many of you will undoubtedly have heard about the social phenomenon that is Youkai Watch. Indeed, the game, manga and anime series has been so immensely popular that some may even say that it has taken over Pokémon’s role as Japan’s favorite character franchise. Naturally, with that kind of popularity comes an abundance of fan art, so Japanese social trend and information compilation site Naver Matome has put together an article introducing selected works found on Twitter that stand out for a specific reason — for giving us an idea of what Youkai Watch may look like in the hands of some famous manga artists!

Now, let’s see what some talented fans have done to recreate Youkai Watch in different styles:

Does this picture look familiar? Well, that’s no surprise, because the drawing by Twitter user @takumitoxin is, according to his own comment accompanying the tweet, done in the style of Akira Toriyama, the creator of Dragon Ball. We think the result is quite impressive, as @takumitoxin seems to have succeeded in giving the picture a distinctly “Toriyama” look.

Here’s a picture by Twitter user ‏@kit90126 in the style of Fujio F. Fujiko, one of the artists in the two-man team responsible for the long-time hit manga/anime series Doraemon. This was apparently drawn for an original four-frame comic strip that @kit90126 shared on his blog.

How about a version of Youkai Watch that looks pop and cute, like this one by Twitter user ‏@modeler3622 drawn in a style similar to that of Hirokazu Hikawa, who created artwork for the Kirby of the Stars comic series? It looks like Kirby’s cuteness doesn’t disappoint, even when transformed into a different character.

In this picture, Twitter user @0tsukushi0 has drawn Youkai Watch with a bit of a Pokémonlook. She says in her tweet that although she isn’t familiar with Youkai Watch, she knows Jibanyan the spirit cat is hugely popular with kids, and also that she drew in elements of fire because of Jibanyan’s reddish-orange coloring.

This dynamic drawing by Twitter user @sekiseisong follows the art style of Ushio and Tora, a popular manga by Kazuhiro Fujita that also features the supernatural sprits and goblins collectively known as youkai. You can see that the main character is holding an insect collecting net in Youkai Watch style, instead of the “beast spear” that appears inUshio and Tora.

Twitter user ‏@tofuboyrecords shared this drawing done in the style of Shigeru Mizuki, creator of the GeGeGe no Kitarō series, which is one of the earliest and most well-known manga featuring youkai spirits. ‏@tofuboyrecords apparently drew this after watching Youkai Watch for the very first time.

Here’s another tweet with a picture done in Shigeru Mizuki’s style. Because of the youkaiconnection, we guess it’s quite understandable for people to associate Youkai Watch with Mizuki’s work. Twitter user @puninpu, who created the drawing, comments in the tweet that Shigeru Mizuki really should be mentioned if you’re going to talk about youkai.

There were actually three works in total by user @puninpu in the Naver Matome article, and this is the second, done in the style of the anime series Tama and Friends. The series features a cast of cats and dogs headed by the cat Tama, and in keeping with the anime’s Japanese title Uchino Tama Shirimasenka (Do you know Where my Tama is?), the caption accompanying this tweet is “Do you know where my Jibanyan is?”

The third picture from ‏@puninpu is not a comic or anime rendition, but rather a presentation of a youkai spirit in a classical, old-fashioned Japanese art style. Wow, we wouldn’t want to come across this fella, day or night!

And last but not least, this drawing by Twitter user @tatami111 is also done in a traditional Japanese style, a bit like something you would see in an old picture scroll. @tatami111 comments in the tweet that the illustration isn’t pretty at all, but actually, we think this Jibanyan looks kind of cute…

So, there you have the selection of Youkai Watch inspired art featured in the Naver Matome article. It’s always interesting and entertaining to see various art styles, and we hope you enjoyed the pictures as much as we did. Now, if only some of these manga artists would actually draw Youkai Watch pictures for the world to see… well, that may not exactly happen, but it sure would be fun to see, wouldn’t it? Here’s to all the Youkai art out there, and happy haunting!

Nowadays, Yo-kai Watch heads the list of the most successful anime series in Japan. This...More

Yo-kai Watch is becoming a huge phenomenon with thousands of fans all over Japan. The...More

Yo-kai Watch The Movie Broke Records at the Box Office in Japan!

Yo-kai Watch the Movie: It’s the Secret of Birth, Meow! Was released on December 20th,...More

This is the year for anticipation as Japan’s most popular franchise, Yo-kai Watch, is on...More