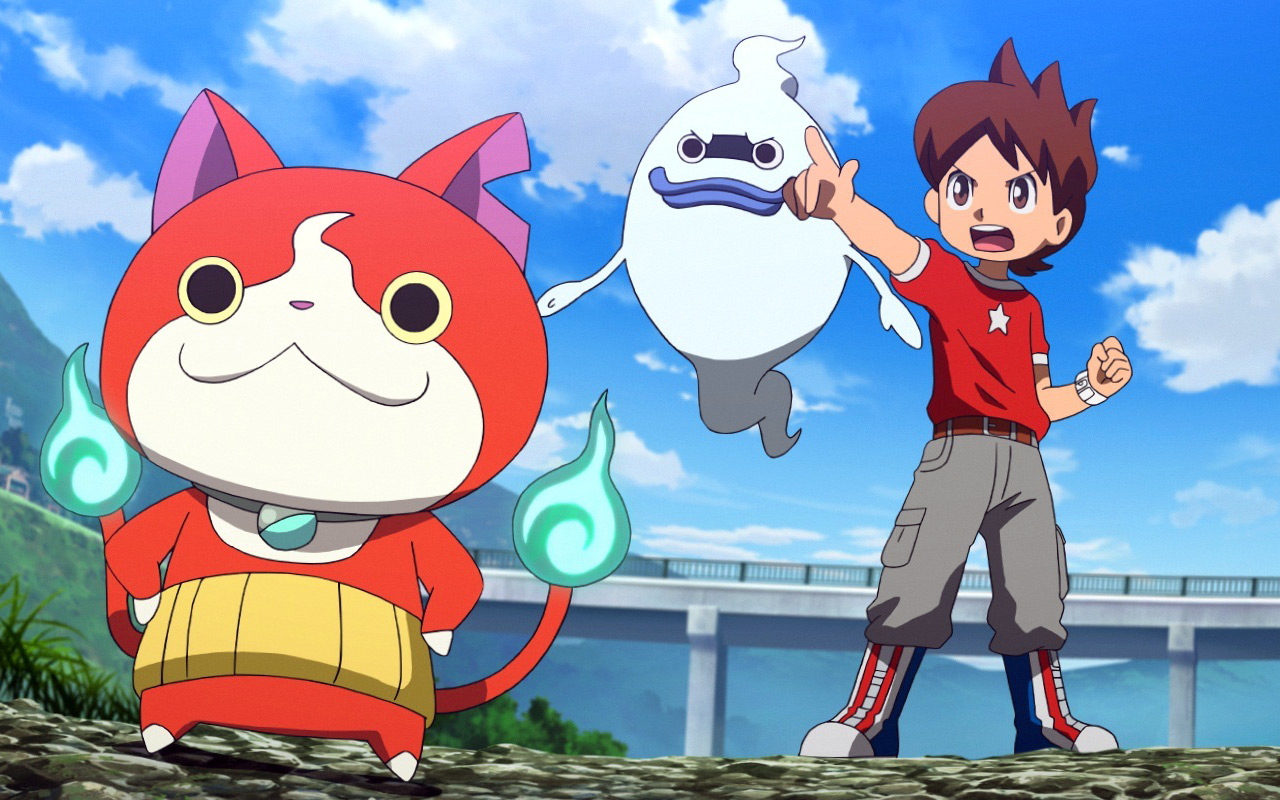 Finally, the English dub of Yo-Kai Watch has released on Disney XD! Thankfully, the translation between the original series and the dubbed series is not much different.

In the first episode, Nathan is introduced into the world of the Yo-Kai by his new ghostly butler Whisper. Via the Yo-Kai Watch, he finds himself just in time to save his parents’ marriage from the unintentional disruption of the Yo-Kai Dismarelda with her husband Happierre. Whisper explains more of the Yo-Kai to Nathan just as they find an intersection haunted by Jibanyan, a ghost of a cat hit by a car who wants to prove himself to his former owner, but Nathan’s kind words make Jibanyan finally believe in himself and he becomes his friend.

While many were nervous about localization issues with the English dub, the result is actually fantastic. The voice acting is absolutely on point, and strangely matches the Japanese voice-over talent for the original anime. While there are a plethora of changes from the original series to the English dub (mostly involving Japanese signage and toning down what little disturbing content there is, such as Jibanyan’s death), the localization by and large kept the original story intact.

Of course, there are some changes to the background elements that anyone familiar with localization would expect. For instance, there is a scene with a man reading a newspaper that was localized by removing some of the identifying elements of Japanese text. There seems to have been additional blurring added to the image to obscure the text as well, likely to turn it away from the identifiable style of Japanese newspapers into a more unknown, generic prop.

Likewise, some storefronts in the back have been edited to be more clear in their purpose. For instance, a shot of the fish monger from the original anime was edited to remove Senjafuda hanging from the banners out front. The kanji on the front of the store was removed and simply replaced with “THE FISH PLACE”.

Interestingly, however, not all of the content from the first anime has been localized. For instance, had thought this was going to be the opening theme for the North American anime release:

This theme was vastly different from the original anime, and long-time fans responded swiftly and negatively:

The localization team listened, though, and actually went ahead with the original theme, even keeping the “Gera Po” part untranslated.

And possibly even more exciting, they fully translated the famous Yo-Kai Exercise Number One ending theme!

And that’s a wonderful thing – a lot of why “Youkai Watch” was so popular as a series in Japan was the catchy, cute music. The exercise alone inspired several viral videos with dancers from all walks of life, both real and imagined:

All of this adds up to a real sense of accomplishment for the voice-over and localization team. Our hopes were that the localization would maintain the charm that was unique to Yo-kai Watch when it was still known as Youkai Watch and relegated to Japanese viewers – I’d say they accomplished that in a big, big way, while maintaining a good amount of understandable and relate-able references and jokes.

Many thanks to the amazing David H. Steinberg, who, along with Keetgi Kogan, oversaw the English adaptation of Yo-kai Watch. Wonderful work, and great job to the entire localization team!

Thanks to the incomparable BDT87 for his comparison piece that inspired this! For more, please join us at the Yo-kai Watch Wiki!

5 Comments on "Yo-kai Watch Season One, Episode One – Yo-kai Are Real!, The Spooky Intersection (English Dub)"