The newest issue of CoroCoro Comics is finally here, and as usual we can now see a few more details that the previous leaks couldn’t provide.

Many new yokai we’ve already heard about before are mentioned again alongside some more that we are just hearing about for the first time in this issue!

☆ マイッカー (Maikkaa), Goketsu/Tough tribe yokai, this car yokai gets over any accident by just saying “Well, whatever~!”

☆ インチキン (Inchicken), Usurakage/Shady tribe yokai, everything about this “chicken” looking yokai is fakery.

☆ いばる～ん (Iballoon), Isamashi/Brave tribe yokai, in his arrogance he inflates his body and floats into the sky.

☆ 寝コロンブス (Necolumbus), Pretty/Charming tribe yokai (not to be confused with the Legend cat yokai named Columbus) Necolumbus is a cat yokai that’s always lying. Is he lying about discovering the new world?

☆ サンデーパパ (Sundae Papa), PokaPoka/Heartful tribe yokai, a father being lazy on his day off.

☆ ガッテンマイヤー (GattenMaiyaa), PokaPoka/Heartful tribe yokai, a housekeeper yokai that allows anything with an “A OK!” 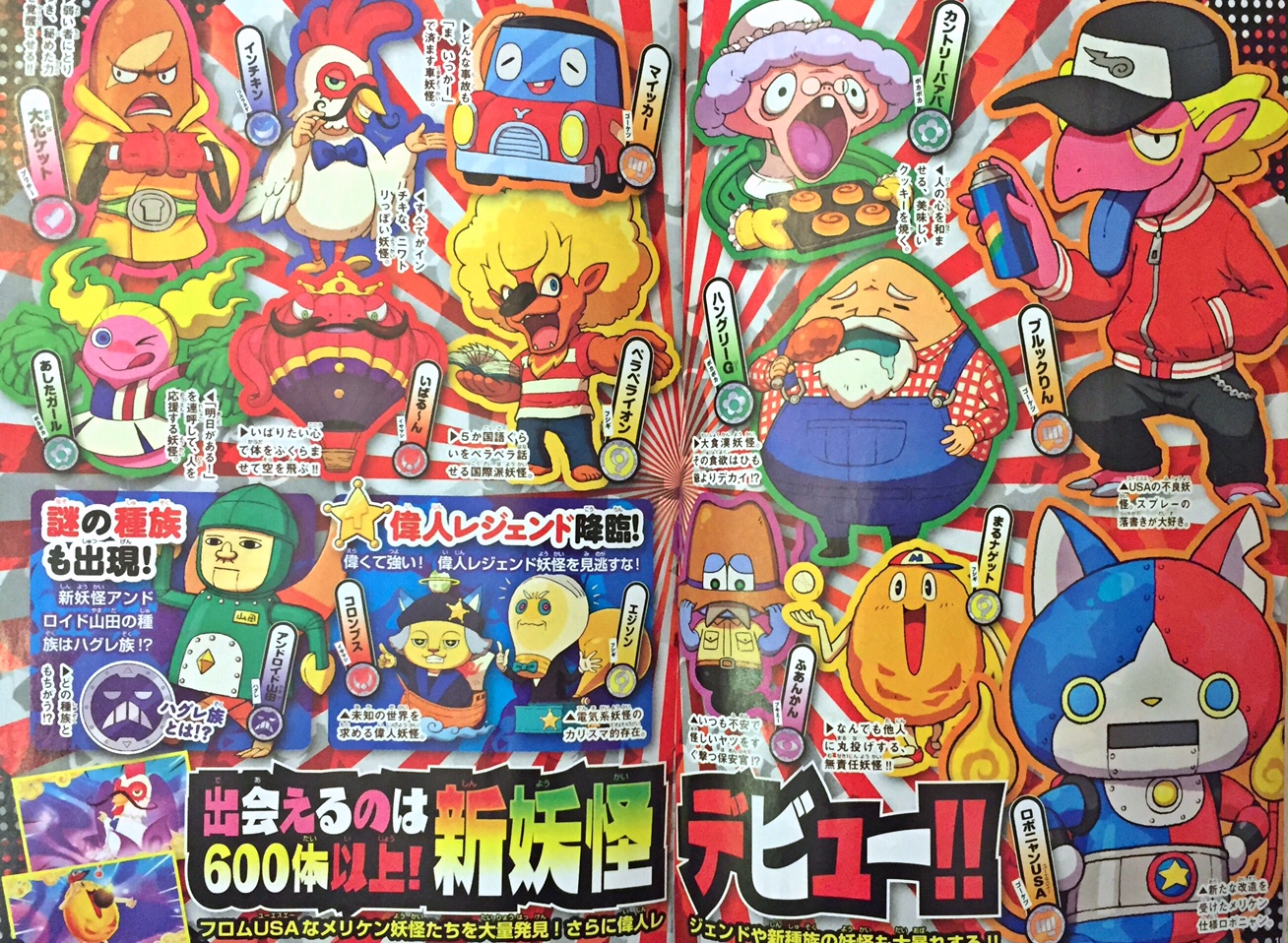 We also caught a glimpse of one of the American yokai bosses, a giant mass of car and scarp parts… maybe we’ll meet this boss in an scrapyard? It’s also mentioned that a new yokai (possibly a Legend yokai) will be revealed on April 29th via the CoroCoro YouTube Channel!

More about the Tactics Medal Board

As we learned before, you can move, place, and swap out your yokai on a 3 x 3 square medal board area. A basic example for placement might be to put fighting type yokai to the front, while setting your healing yokai more toward the back. However, we now learn that the enemy yokai will also be moving on a similar 3 x 3 area as they compete with your team.

Depending on the placement of your yokai, different attack formations can be triggered. Your special attacks (Soultimates) are also initiated using new touch actions on the medal board.

As we already knew, Yokai Watch 3 takes place in both Japan and America. Back in Japan we’ll be able to explore a new area, Aobahara (equivalent to Tokyo’s Akihabara) where Otaku shop for games, computers, and other electronics. NyanKB idol concerts will also be held there?!

If you get the download version of Yokai Watch 3 Sushi you’ll unlock SushiJiba, whereas if you download Tempura version you’ll unlock TenKoma instead. If you opted for the package versions you’ll get KK Brothers and Tomnyan Dream Medals instead.

These three big scheduled updates are mentioned again, but they give us no solid new information about them other than they may contain new events and new yokai?!