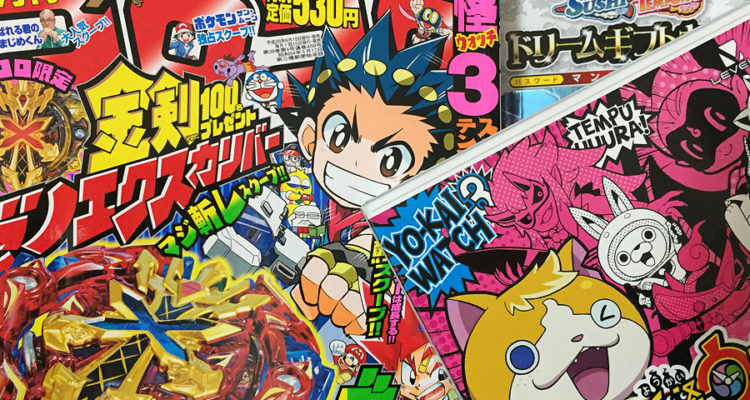 The July 2016 issue of CoroCoro Comics is out now! This issue brought us big news of the new movie set to release this December! Read all about that here: The Great Adventure of the Flying Whale & The Double World, Nyan! as well as covered some information we actually already learned earlier from Famitsu! Read those details here: My Nyan Maker, Zombies, & The X-files?! and with that… let’s move on to what you all want to know about most for today… NEW. YOKAI. 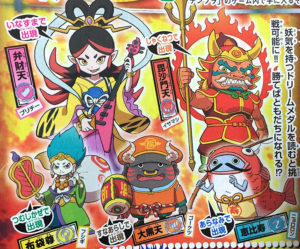 Some of the famous Seven Lucky Gods are joining the crew in Yo-kai Watch 3! So far; 弁財天 (Benzaiten), 毘沙門天 (Bishamonten), 布袋尊 (Hoteison), 大黒天 (Daikokuten), and 恵比寿 (Ebisu) have been announced, and players will be able to befriend them if you have both a copy of the game (Yo-kai Watch 3) and the new Dream Watch.

Unlocking these special characters in your games will require a multi-step process and access to different goods in the franchise:

・ Each “Dream Medal” will contain a data chip (妖気 “magical energy”) that can be read and written to (charged up!) by the Dream Watch.

・ Players will load a Dream Medal into their Dream Watch to “charge the magic energy” inside by playing the “Dream Roulette” feature.

・ If you score a win while charging the medal you can then use a New Nintendo 3DS touch pad or an NFC Reader (sold separately) to have the “win” read by your copy of the game.

・ This win will be translated into the game as an item that will be what you need to obtain one of these Lucky Gods!

If you have the Dream Watch, you can get Bishamonten as a matter of course as the watch can bestow the aura required for befriending him, for the other four gods, however, you will need the following:

・ To obtain Benzaiten you will need the Tempura version of the game.

・ Hoteison‘s method is still a mystery!

* Speculation Time! it is our guess here at WoY that Hoteison’s method may have something to do with the “Christmas Present” Dream Roulette option, leaving the final two “Shopping Mall Lotto” and “Seat Change” options available for the remaining two Lucky Gods; 福禄寿 (Fukurokuju) and 寿老人 (Juroujin).

Many of the brand new Yo-kai Watch 3 yokai will have cool alternate color versions! These will be obtainable through gasha coins that will be released weekly via internet. They will be super rare, and S-Rank! 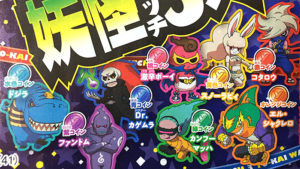 If you missed out on any details from last month, catch up here: Yokai Watch 3 News! – CoroCoro June 2016 Full Details

The new nyan yokai Koalanyan was also announced! He will appear in the upcoming movie this December. Right now CoroCoro is holding a drawing and naming contest, fans can draw a picture of a unique signature pose for Koalanyan that could be used for a Koalanyan Dream Medal! There will be many winners who will be rewarded with medal packs, a Dream Watch, or Yo-kai Watch 3 AND a DreamWatch. Whoa~!

Some rare medal alerts for this summer are ~ *drum roll* ~

– an exclusive Android Yamada U-Medal will be available only at the 2016 Summer World Hobby Fair (WHF’16) in Japan.

– an exclusive “real” Jibanyan Dream Medal be announced in the August issue of CoroCoro Comics… not sure yet if this medal will come available this summer, or perhaps in winter in the theatres.