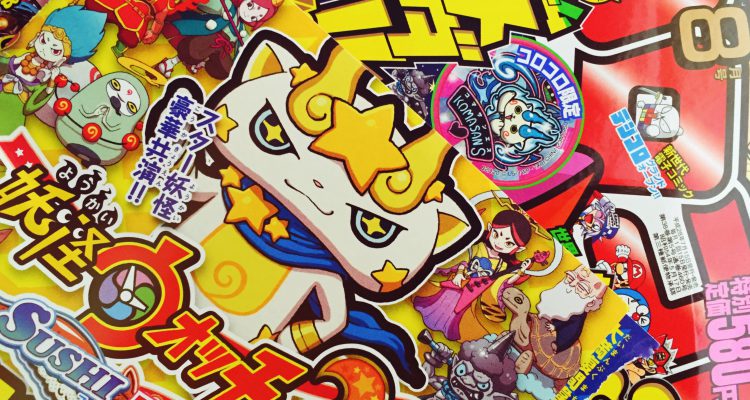 First let’s meet two new 妖怪ウォッチぷにぷに (Yo-kai Watch Wibble Wobble) characters (Japan only… for now); ぷにコマ (PuniKoma) & ぷにニャン (PuniNyan). PuniKoma is obtainable via download code if you have the Tempura version of Yo-kai Watch 3 for Nintendo 3DS, PuniNyan is available if you have Sushi version! 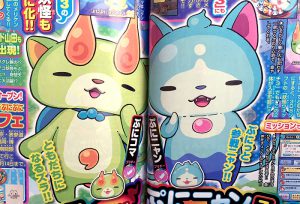 And now for the 50 new yokai, appearing in Yo-kai Watch 3 for Nintendo 3DS…

☆ ばたんQ (BatanQ) Bukimi/Eerie tribe Legend S-rank yokai. This most compassionate yokai lets people go out like a light and collapse into sleep right away when they get home, so very tired at the end of the day.

☆ 毘沙門天 (Bishamonten) Isamashi/Brave S-rank yokai. One of the Seven Lucky Gods who brings happiness. Called the the God of Battle, he is the most admirable among proud and strong yokai.

☆ 布袋尊 (Hoteison) Fushigi/Mysterious S-rank yokai. One of the Seven Lucky Gods who brings financial fortune. He takes out and passes around the riches from the bag he carries over his shoulder, extremely generous!

☆ 大黒天 (Daikokuten) Goketsu/Tough S-rank yokai. One of the Seven Lucky Gods who commands wealth. He distributes things such as food and money among the needy with a swing of his Lucky Mallet.

☆ 弁財天 (Benzaiten) Pretty/Charming S-rank yokai. The only women among the Seven Lucky Gods. Music, wisdom… Benzai is the Goddess who commands these. Being an expert at playing the musical instrument called a Biwa (Japanese lute), the timbre of her notes can call upon lighting.

☆ 恵比寿 (Ebisu) Nyororon/Slippery S-rank yokai. The God of abundant crops, that was born in Japan. His favorable presence brings in large fish and prosperous, thriving business.

☆ コタロウ (Kotarou) Isamashi/Brave tribe ‘Merican S-rank yokai. A super elite Ninja who graduated head of his class at Ninja School. Under cover of darkest night he sneaks into all sorts of places.

☆ スノーラビィ (SnowRabbi) Fushigi/Mysterious tribe ‘Merican S-rank yokai. This rabbit made of snow is a yokai of having feelings. With purity like sheer white snow, she purifies people’s hearts.

☆ エル・シャクレロ (El Sharkrero) Goketsu/Tough tribe ‘Merican S-rank yokai. Appearing from the deep seas near the USA, he’s a fresh new face in the world of yokai pro wrestling. Because of extensive gill-breathing training in the deep seas, he exhibits incredible strength.

☆ カルラ (Karura) Pretty/Charming tribe Classic S-rank yokai. Incarnation of a gigantic, divine bird. He snaps up the wicked, and is thus worshiped by many. Poisonous vipers are his favorite food.

☆ 激辛ボーイ (Gekikara Boy) Pretty/Charming tribe ‘Merican S-rank yokai. An Unbelieva-Bou who grew up from eating red pepper. He always has the most extremely hot spices from all over the world hidden in his pockets.

☆ Dr. カゲムラ (Dr. Kagemura) Usurakage/Shady tribe ‘Merican S-rank yokai. Super Doctor yokai who is active in the USA. He is in the same role and at odds with his father who is also a doctor.

☆ ドジラ (Dozilla) Nyororon/Slippery tribe ‘Merican S-rank yokai. An excessively clumsy, super strong dinosaur yokai. In an effort to save a town from bad guys, he inadvertently destroys all the buildings.

☆ センポクカンポク (SenpokuKanpoku) Nyororon/Slippery tribe Classic S-rank yokai. A yokai that uses the light from his paper lantern to guide the souls that are drifting around. He goes about things leisurely in his own way.

☆ 総ナメ (Souname) Isamashi/Brave tribe A-rank yokai. An Akaname that had become dissatisfied with only licking up the filth in bathrooms, so he migrated to the USA to become a big star.

☆ 天下無僧 (Tenkamusou) Isamashi/Brave tribe A-rank yokai. He holds peerless power, winning many honest wrestling matches. He can defeat a great number of opponents by himself.

☆ じごくミミズク (JigokuMimizuku) Fushigi/Mysterious tribe A-rank yokai. Because the yokai Soramimizuku was plagued with mishearing, it evolved to have a more trained ear. As a result, he now has absurdly large and sharp ears that hear everything.

☆ そーナンだー (Soonandaa) Fushigi/Mysterious tribe A-rank yokai. An evolved Nandenan that has finally found the answers to all its questions! He’ll say “Ah, is that so…” to everything and move right along.

☆ ステーキング (SteaKing) Goketsu/Tough tribe A-rank yokai. A king yokai that lives in the Chateaubriand in the Steak Kingdom. He maintains his body at a perfect, medium rare temperature.

☆ ギュウ汁 (Gyuujiru) Goketsu/Tough tribe ‘Merican A-rank yokai. A yokai that aspires to control and incinerate the entire world. Treated to some homemade Gyuujiru, those who eat it will become his captives.

☆ かまいたち (Kamaitachi) Pretty/Charming tribe Classic A-rank yokai. He appears on a whirlwind with a giant sickle, precisely slashing things up. Those who have been cut won’t even notice they’ve been hit.

☆ ふろーラル (Floral) PokaPoka/Heartful tribe A-rank yokai. As a result of the yokai Furozukin continuing her bath by scrubbing all over, she transformed into this floral scented yokai.

☆ いたれりつくせり (Itareritsukuseri) PokaPoka/Heartful tribe A-rank yokai. A landlady yokai that has taken charge of an old hotel. With the upmost hospitality, she ensures her guests are rapturously satisfied.

☆ ハッキング (HacKing) Usurakage/Shady tribe ‘Merican A-rank yokai. The otaku yokai Geekun strayed to the path of becoming a hacker king. He can break through any kind of security.

☆ 怒気ドキ土器 (DokiDokiDoki) Goketsu/Tough tribe B-rank yokai. In a fit of rage, a Dokidoki that started to rampage around trying to destroy everything.

☆ 油すまし (Aburasumashi) Nyororon/Slippery tribe Classic B-rank yokai. A yokai that loves rumors. He appears out of nowhere and surprises people.

☆ シラ切りスズメ (Shirakiri Suzume) Isamashi/Brave tribe C-rank yokai. A sparrow yokai that slices any and everything. Cutting off the unknown evil inside oneself…

☆ スットン卿 (Lord Sutton) Fushigi/Mysterious tribe C-rank yokai. A yokai that haunts parties. An aristocrat that causes a scene with his reckless behavior.

☆ 一瞬ボーイ (Isshun Boy) Isamashi/Brave tribe D-rank yokai. At the size of about 3cm, this little boy yokai romps around quickly.

☆ 枕返し (Makuragaeshi) Isamashi/Brave tribe Classic E-rank yokai. Appeared quietly in the middle of the night, he’s a bothersome yokai that flips over the pillows of those who are sleeping.

☆ ほっとケーキ (HottoCake) Pretty/Charming tribe ‘Merican E-rank yokai. She has a pouty “Leave me alone” attitude, but really she’ll be angry if she’s ignored.

☆ 風呂ずきん (Furozukin) PokaPoka/Heartful tribe E-rank yokai. She loves to take a bath every single day, is she merged with the bathtub? 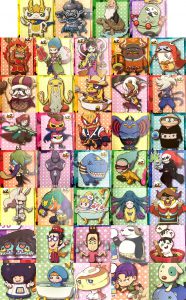 some of the new yokai!

Don’t forget to check out some of our previous articles for more new yokai and news! 50 New Yo-kai! CoroCoro June, Yo-kai Watch 3 Features CoroCoro July, and All About Yo-kai Watch 3’s My Nyan Creator!