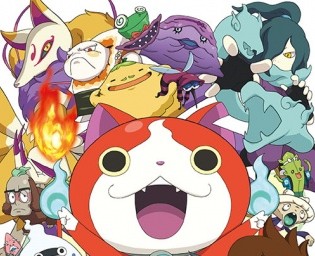 Over 6 million units of a game you’ve never heard of was sold in Japan last year. And now it’s coming to the rest of the world. What is it? Should we be excited? Christopher Dring investigates

Towards the back end of 2012, Japan’s massively popular CoroCoro Comic magazine published a manga called Youkai Watch (or Yokai Watch or Yo-Kai Watch depending on your translation).

It was designed to be a preview of sorts to a new 3DS game from Level-5 – a studio that is best known over here for its Professor Layton series, but in Japan is a real gaming giant that’s behind hit franchises including Ni no Kuni, Inazuma Eleven and Little Battlers.

The manga was popular and when the Youkai Watch video game finally arrived in July 2013 on 3DS, it proved to be a moderate hit for Level-5.

Come the following January and the next part of the Youkai Watch story began to unfold. An anime based on the game’s story was released and Youkai Watch went from a small success to a full blown phenomenon. The game shot straight to the top of the Japanese charts and it stayed there.

Despite the original game still sitting pretty in the Top Three, Level-5 released a second title in July 2014. That game was split into two versions: Youkai Watch 2: Ganso and Youkai Watch 2: Honk. And it was followed by a third, advanced edition called Youkai Watch 2: Shinuchi in December.

And then to top it all off, the Yokai Watch anime movie arrived at the end of the year and generated £9m in one weekend – that was the highest-grossing opening weekend for a Japanese film in at least 14 years.

Yokai Watch went from niche RPG 3DS adventure to cross-media juggernaut in less than a year. And Level-5 confirmed to MCV this week that it is currently ‘building a business plan’ that will see Youkai Watch come to the rest of the world.

Youkai Watch has become a big social movement in Japan.

“There are two reasons why Youkai Watch has become such a social movement in Japan,” begins Ricky Tanimoto, marketing analyst at leading Japanese media giant Famitsu.

“Firstly, Youkai Watch is using cross-media, which acts like a way of marketing. Level-5 has been partnering with a TV broadcasting station, toy makers, and advertising companies. They have been using the relationship between original video game, animation, and toys and so on. This marketing strategy is successful in creating a boom in Japan because it causes increased Japanese consumer motivation. However, other titles tried this strategy like Level-5, and they have not been as successful as Youkai Watch. So, I believe the original idea of Youkai Watch is an additional influence on this boom.”

Youkai Watch tells the story of a boy named Keita or a girl called Famika who gain the ability to see various different Youkai, which are ghost-type creatures that are haunting people and causing mischief. Along with a Youkai companion called Whisper and the mystical Youkai Watch, the player must befriend good Youkai and summon them to battle against bad ones.

“Level 5 CEO Akihiro Hino is well known for his ability as a producer,” continues Tanimoto
“And the success of Youkai Watch is also a due to the fact that a video game produced by Mr. Hino is very attractive to Japanese consumers. He is great at catching the current interests of children and daily life, and enhancing that with story and characters.

“The visuals and setting of Youkai are especially elaborate and the relationship between the main character and the Youkai is different to other games, because you have to become friends with the Youkai. The two co-operate to solve a problem and grow up together. As a result, parents feel Youkai Watch is safe for children because the setting follows the common daily life of school.

“The combination of the cross-media marketing strategy and the game’s interesting contents means that Youkai Watch has become a continuous attractive trend amongst children. And the support from parents has helped it become a big social movement for the Japanese market.”

The concept of Youkai Watch certainly sounds like
something that could attract an audience in the West.

Youkai Watch certainly evokes Pokémon-style memories. A Japanese phenomenon built up via a combination of anime, toys, cards and video game. So the inevitable question is: could it do the same in the West?

It’s not an easy one to answer. Hello Kitty, Pokémon, Dragon Ball Z, Digimon… all examples of Japanese properties that transitioned across to the West successfully (albeit to different levels). But then there are titles like Monster Hunter – a game that sells in the millions in Japan but has really struggled for momentum in the US and Europe despite the best efforts of its creator Capcom and Nintendo.

Children viewing habits have changed, too. The Pokémon anime was a huge hit in the West, but that was in the days before iPad and streaming and catch-up TV transformed our viewing habits. The launch of a successful cartoon no-longer automatically equates to a successful video game.

The fact the game is a 3DS title counts against it, too. 3DS has yet to really set the Western world alight in the same way it has in Japan, with more Western consumers transition from dedicated portable consoles to iOS and Android.

Yet for those mitigating issues, Youkai Watch certainly sounds like something that could attract an audience in the West. Capturing monsters and becoming friends with them is a globally appealing concept – just look at Skylanders and Moshi Monsters as recent case studies.

These things are never safe bets. But with big names involved such as Nintendo and toy manufacturer Bandai, there’s certainly the potential for a Western hit. It will be interesting to see which partners Level-5 can bring on board, because if it can get that right, then maybe we are looking at the next global video games kids craze.

How To Get Sapphinyan in YW 2 Psychic Specters!

Learn How To Get Sapphinyan in Yo-kai Watch 2 Psychic Specters with this family-friendly Gameplay...More

How To Get Moximous N in Yo-kai Watch 2 Psychic Specters!

Learn How To Get Moximous N in Yo-kai Watch 2 Psychic Specters with this family-friendly...More

No Comments on "Can Japan’s biggest video game, Youkai Watch, conquer the West?"