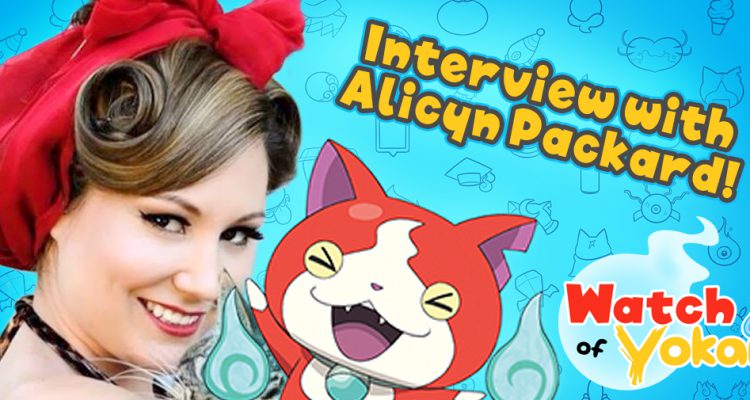 Watch of Yokai team member Rhys Berresford recently sat down, via Skype, with American voice actress, singer, and writer Alicyn Packard! She is the well known and well loved voice of the funny, irrepressible, and choco-bar-loving yo-kai cat, Jibanyan in the Yo-kai Watch anime and game series! She also provides the voices of Komajiro, and Nate’s mother among other voices in the show.

Watch of Yokai: Were you aware of Yo-kai Watch before you took on the role of Jibanyan?

Alicyn: No, I was approached by the director, Mark Risley. They showed me the Japanese anime, medals and a ton of other stuff. So I auditioned for many of the characters and my first impression was “Wow, this is unlike anything I have ever seen or heard before!” He showed me the Yo-kai Exercise music video in Japanese and it had millions of views. I was so blown away by how big the show was in Japan and just how clever the comedy was. I feel Dave Steinberg did a great job with the localization, making the dialog play to an American audience. Now I love it, the show is very special to me.

Watch of Yokai: Do you have any favorite episodes?

Alicyn: The first episode of season 2, with Steve Jaws, was so funny! It has the type of humor that I really love!

Watch of Yokai: Have you had a chance to play the games yet, and if so what’s your favorite?

Alicyn: I am super addicted to Wibble Wobble! I can’t put it down, I even made my own wib wob with Mimikin. I am planning to play though Yo-kai Watch 2 as soon as I can.

Watch of Yokai: Of course now I have to ask, who is your favorite yo-kai?

Alicyn: Well, I do have my bias towards Jibanyan! (laugh) But, I couldn’t really choose, they’re are all really wonderful!

Watch of Yokai: What other roles have you had, in the past, before working on Yo-kai Watch?

Alicyn: I voice Little Miss Sunshine, Little Miss Naughty, and Little Miss Whoops from the Mr. Men and Little Miss series. Also, Robyn in Space Racers, Toodles from the new Tom and Jerry, and I play Alma in Poppy Cat, the blood elf voice and Servara the Destroyer in World of Warcraft, as well as a few other anime roles.

Watch of Yokai: Are there any notable differences when working on an anime dub, compared to shows made in the west?

Alicyn: We use ADR, which is very different as we are re-recording dialog to match the lip flaps*, and it takes a lot of practice to try and make it match up. It’s a very different skill set. You need to be able to match the timing, for example when Jibanyan uses his Paws of Fury in Japanese, he may sometimes speak very fast… meaning I need to speed up my dialog to match while still maintaining the acting. It’s quite the challenge when you are in the booth and you only have whats on screen to play off of. In that booth it’s just you the mic and the mic stand.

*[note: lip flaps are the already animated mouth movements that were originally made to sync with the original language dialog]

Watch of Yokai: Wow, this is all really interesting and it links into my next question, do you have any advice to aspiring voice actors?

Alicyn: My advice is take acting classes and try to network as much as possible.There are so many areas to work in; Commercials, Video Games, Narration, Audio Books, the list goes on. For anyone looking to get into strictly animation voice acting, I recommend taking as many acting classes as you can, take improv classes, read out loud as much as you can, and then voice over classes.

Watch of Yokai: Finally, we wanted to know, has YouTube had an effect on you as a voice actor, as a lot of new talent are being found there in recent years?

Alicyn: Yes, sure, YouTube has changed a lot of things. It brings a lot of people together and YouTube is a perfect way to build a demo and show off your stuff if you’re looking for a job without an agent. I also recommend getting an in-home studio set up, or if you have a studio close by you can also get some practice in.

The Watch of Yokai team and all your fans want to thank you so much for taking this time out of your busy schedule to sit down and chat with us! We can’t wait to see what else the future holds for you… and of course, Jibanyan!

Recently, I got the chance to interview one of the most well-known YO-KAI WATCH fans...More

No Comments on "Alicyn Packard, the Voice of Jibanyan!"